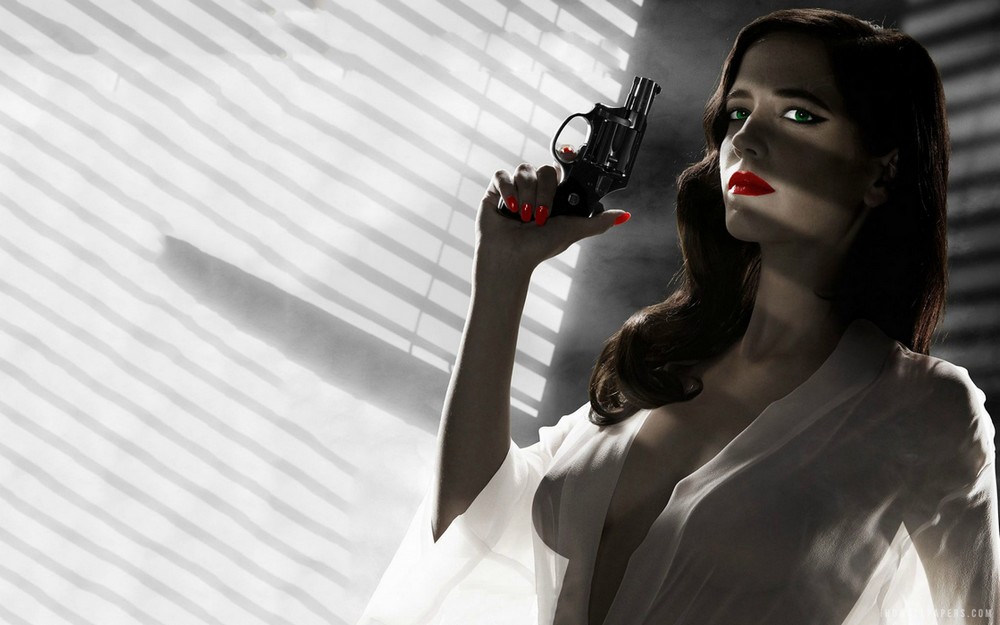 (Read the following paragraph in a deep voice like you’ve been smoking 12 packs of cigarettes a day since childhood). The shadows of the night consumes the sweat off the humid streets of Miami, as I pop into a theater to catch a sequel to a film that knocked my socks off when I was kid. Sin City took everything I loved about hard boiled detectives and classy Hollywood then mixed it with age of tomorrow effects. It felt new, felt like a breath of fresh air after being trapped in the slammer for who know’s how long. As I slip into a theater, playing it like Bogart, I take stock of the audience around me and say: (Voice cracks) “Wait the hell a minute, am I the only person in this theater?!”

(Back to my normal voice) Well, guess nobody gave a crap about a sequel to Sin City, less so now that I saw the Box Office Results for the weekend. Still, watching the movie left me with a weird…”ehhh, I dunno about this.” On one hand, the original Sin City felt so unique when it was released back in 2004, like a brand new style of filmmaking was set to begin (even though it only gave us Immortals, the 300 movies, and *shutters* The Spirit). So the sequel give us more of that style…but on the other hand, it’s more of the same thing we saw nearly 10 years ago.

For those not in the know, the Sin City movies are comic adaptations of one-time legendary comic writer, Frank Miller (we’ll get to him later). The comics recount the lives of various residents of Sin City as they deal with corruption, murder, assassinations, prostitution, rackets, and everything else that made your parents turn off the television and rush you to bed. The trick with these movies is that each film displays four unconnected shorts with an all-star cast composed of Mickey Rourke, Jessica Alba, Joseph Godron-Levitt, Bruce Willis, Lady Gaga, Josh Brolin, Eva Green, and Rosario Dawson.

So let’s break down each story one by one. First we have the titular story, “A Dame to Kill For.” Josh Brolin is a private detective who’s violent tendencies are reignited by his old flame played by Eva Green. Brolin plays the part incredibly well, he out of any other actor in this piece plays his role in a way that would make Humphrey Bogart proud. Everything from the fast narration, the ugly mug, and bruiser body screams classic noir. And while Eva Green is gorgeous here…she’s also chewing the scenery for all it’s worth. She plays her role so over-the-top that I was wondering if she was going to start licking the scenery whispering: “I’m the bad one.”

Next we have, “The Long Bad Night,” where Joseph Gordon-Levitt plays a slick gambler who runs afoul of Senator Rourke (played by Powers Booth) in a game of poker. The game ends in JGL’s favor, but Rourke escalates his revenge on the cocky kid. JGL is the third best actor in the movie, playing the other version of typical noir protagonist, the down-on-his-luck wise guy who is too smart for his own good. Booth’s villain turn is. as with Green, completely silly over-the-top. I GET this is based on a comic, but you don’t have to go overboard (see: Captain America, Guardians, and Batman).

Finally, there’s “Nancy’s Last Dance.” And Jessica Alba plays…well Jessica Alba. I know that the director have been longtime friends, but damn this woman has not learned to act. She’s been in the business for over a decade and a half with no sign of improvement. Anyways, she wants revenge against Senator Rourke for Bruce Willis’ death in the last movie (spoiler I guess?) and enlists Mickey Rourke to help her.

Rourke is awesome in his role. While the character is meant to be scary, here’s kind of darkly funny employing a ton of gallows humor from scene to scene. Which makes Jessica Alba looks comparatively worse when she acts next to him. Of the stories, this one is probably the weakest, but unfortunately it’s also how the movie ends.

On the positive side, this movie is a trip to look at. While the film is predominately shot in black and white, splotches of blood red or multi-colored hair highlight scene-to-scene. Sometimes, I forgot that I was watching everything be told through computer generated graphics with a few live actors in the middle of a bunch of it. So happily, the effects have improved over the last decade and really helped solidify the movie going experience along with gorgeous art direction. It recreates that, “comic book feel” as if you really were watching the panels animate and come to life. And while the acting can be a bit over-the-top, it feels intentional nonetheless.

So if I dug it for the most part, then why do I have so much trepidation towards it? Honestly, my doubt about the film begins and ends with the women in this movie. EVERY actress in this movie is playing a prostitute, a stripper, or a woman using sex as a means to an end. This is more of a fault of the original writer, Frank Miller, who is crazier than a shithouse rat. Not to mention rampantly misogynistic, since everyone’s favorite words in this movie are, in order: slut, whore, and bitch. Oh and the fact, that the actions of men are “blamed” on the women in this movie driving guys “crazy.”

Maybe, it’s a part of me that’s gotten older and matured a bit (not by much mind you, I still think about Batman every 3.4 seconds). But I saw the original movie over the weekend, and it wasn’t THAT bad when it came to portraying women. Another positive of the original movie was that it was PACED better. The three separate stories felt too “clunky” for me. Like, the film loudly proclaimed “that’s the end of that story, no on to the next!” I felt like the original did the story transitions slightly better.

Still, the overall direction was a big step up for Robert Rodriguez, who I felt has been struggling for the past few years compared to his partner-in-crime, Quentin Tarantino. I’m happy to see him improved, and it genuinely looked like he was trying to contain some of the more, shall we say, “screwed up” inclinations of Frank Miller. So if you’re still a fan of the original movie and want to see more of it, then I can easily recommend a Matinee to watch this. You’ll get more than enough enjoyment with admiring the art direction and the campy acting.

But if you aren’t a fan or have serious problems with depiction of women in media? Yeah, you might want to wait for Redbox to check it out. As for me? I enjoyed it, but the problems with the over-the-top acting and some clunky pacing throughout the movie left me a little cold. Overall, I’m going to give it an enthusiastic…