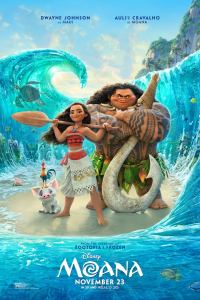 I got to hand it to Disney Animation Studios. Ever since The Princess and the Frog, the legendary studio has been hellbent on upending many of the conventions they created (and profited from famously). From Frozen being a Disney princess story that discusses how insane it is to fall in love at first sight to Zootopia using talking animals living in a city as a metaphor for racism, the animation company really has been on a rise not since Pixar’s heyday. Does their new film Moana serve as another notch on their proud belt? I don’t write 1200 words per review to give you a yay or nay, you’re reading.

Our main character, Moana, is being trained to be next chief of a Polynesian tribe by her conservative and isolationist father. However, she always dreamed of seeing what was beyond the reef surrounding her island after being enchanted by the myths Moana’s grandmother told her. She finally decides to venture out into the sea when she notices that food supplies are dwindling due to a curse placed upon the world due to the actions of a demigod named Maui (Dwayne Johnson). Maui had stolen the heart of a goddess (literally) and accidentally unleashed a curse upon the islands, one that can only be reversed by returning the heart to it’s rightful place. Moana’s journey takes her to find Maui and force him to make things right…even though he’s kind of a dick.

So right off the bat, I’ll say that I really loved the characters of Moana and Maui. Moana, in particular, has a cool angle to her because she’s essentially a Disney princess who’s actually going to lead and govern her people. Her villagers, men and women alike, rush up to her looking for guidance and for help in their day-to-day. On top of that, NOBODY makes a fuss that she’s a woman, there is absolutely no doubt she’s going to be the next chief of the tribe as the offspring of the current chief. I really dug this, because the movie doesn’t waste time with a lesson (women are as capable as men) that we, as a species, should have learned ages ago and instead becomes a message of self-discovery. Bonus points were awarded to her character for not having dead parents! Truly we are seeing leaps and bounds when Disney decides to alter their formula by a teeny bit. Her actress, a Native Hawaiian named Auli’i Cravalho, brings a confident performance that feels relatable, and will no doubt inspire girls with her passion for exploring. Best of all, the events of the film are driven by Moana’s actions and ends up saving on numerous occasions the big muscular hero.

And what better actor to portray a large, bulging hero than The Rock? While the guy is much more known for his physical performances, he brings a healthy amount of comic relief as Maui. What’s even more surprising than his ability to tell jokes is also impart a tragic backstory that comes across as genuine rather than laughable. I do want to clarify that’s only because he’s a fully fleshed out character, with fears, goals and a unique personality. Oh and he’s got his own little sidekick in the form of a 2D tattoo that fucks with him constantly. To my surprise, he’s even got a great singing voice for a solo number he has (though Cravalho absolutely dominates this movie with her voice).

Oh yeah, this is a Disney musical, which oddly wasn’t as heavily advertised as say Frozen was. Though the songs are quite good, I mean I downloaded three songs already so that’s a mark in the movie’s favor. Coming from the mind of Lin-Manuel Miranda (the guy behind Hamilton) and Opetaia Foa’i (a South Pacific musician), the songs are all heavily catchy and beautifully composed. What also sets this soundtrack apart is how heavily the Polynesian culture inspired the songs everywhere, so you get a unique sound that’s rare to hear from elsewhere. And even Jermaine Clement comes in out of nowhere with a wild, flashy musical number as a villainous character. While I think Sing Street had the better songs, this is still a great album to check out because all the songs tie directly into the story the movie is trying to tell just like a great musical should.

I also shouldn’t be praising Disney any more for the quality of their animation. The sky is blue, dogs bark, Marlon Wayans sucks, and Walt Disney produces gorgeous visuals. Because my God, this movie is fucking beautiful. Everything from character designs, to the environments and the motion of the ocean (that’s what she said) must have taken hours of meticulous work to produce and to make it feel alive. They even created “the dumbest character in the history of Disney animation” (director quote) with a chicken voiced by Alan Tudyk, who continues his streak as serving as the studio’s good luck charm by voicing a bit character in every single film they make. Then the company has the testicular fortitude to deliver a balls-to-the-wall climax packed with emotion, passion, and amazing beauty. Such oddities is what separates this movie from other animation like Sausage Party and The Secret Life of Pets, the cartoon immerses you in its world so deeply that it’s kind of hard to leave it.

And after I left the theater I did wonder whether my praise of Moana was overly positive. I mean the movie relies heavily on well worn tropes, particularly the Hero’s Journey with a main character who ventures out into the world to accomplish a mission that would save their home, but ends up returning with a wealth of knowledge that changes their people’s future. When you get right down to it, this movie feels like sea voyage between Belle from Beauty and the Beast and the Genie from Aladdin with the pair growing a friendship as they resolve their mission. And yet, despite going down a beaten path, the film’s gorgeous visuals and unique music comes together to separate its characters from the rest of the Disney canon in unique ways. As my girlfriend put it, there’s something about the film that can inspire people way more than the story beats it relies on.

So I now see that feeling comes down to just simply beautiful moments, of note was Moana’s grandmother played by Rachel House. She plays the elder, wise mentor to our hero but their familial bond feels genuine and leads to an emotional reunion when our hero needs one most. Thus creating a change in our protagonist that feels amazing and inspiring, that made me catch myself getting swept up in the moment. And that’s just one scene of several that stood out for me in a very, very fine film.

So I guess what’s left to answer is whether this is a good film or a great one. While Zootopia got to my heart more, Moana is simply a great movie on its own that I wouldn’t be surprised would make the best of the year list for several people. Adults, kids, and everyone in between will find something to love about this movie, so I’m giving this a very solid…