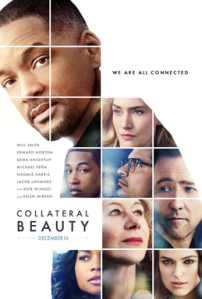 It’s one thing for a trailer to straight up lie about a films premise, it’s another thing entirely when the real film is so much worse than the lame premise it was being sold upon. So I need to get something out of the way before I proceed any further: the movie being sold to you in Collateral Beauty‘s trailers is not the film we actually have. To discuss what I mean, I may be dropping into what some consider to be spoilers…however these revelations I’m making are presented in the first 15 minutes of the film. You’ve been given your spoiler warning…but I still wouldn’t spend a dime on this piece of shit if you have the chance.

So Will Smith plays Howard, the head of a once successful advertising agency in New York City, now in the middle of a grave depression brought on by his daughter’s death two years prior to the film’s events. Smith’s friends (Edward Norton, Kate Winslet, and Michael Peña) are upset by the depression, not just because they miss their “friend,” but because they’re also his employees and their company is bleeding customers fast. A chance to save the company presents itself when another firm offers to buy them and secure their creative freedom (in a only-in-Hollywood arrangement), but Smith is SO depressed that he won’t even consider speaking to any of his employees and he just spends his days assembling and knocking over dominoes. Oh yeah, and Smith spends his non-company time writing letters to Love, Time and Death.

Smith’s character obsesses over these concepts because he considered them to be the three things that unite humanity and how you can sell shit to people (bullshit like this movie – hold your applause for that joke for the end). Smith’s friends find the letters through severely illegal means and decide to hire three out-of-work actors (Keira Knightley, Jacob Latimore, and Helen Mirren) to portray Love, Time and Death respectively and have them speak to Will Smith about his frustrations with each concept. Oh, not merely to bring the Fresh Prince out of his funk, no they specifically want to paint Smith to be considered legally incompetent so that his so-called friends can take control of the company and sell it (oh but they all really need the money you guys…).

Fucking hell, that’s not even close to the goddamn trailer we got. I mean I figured the apparitions were just actors from certain scenes in the trailer, but the intent of Smith’s friends is goddamn horrifying. The film calls itself out on it by describing the scheme as gaslighting (derived from a film called Gaslight), where you basically make someone think they’re absolutely insane to control them. It’s rightfully pointed out as a disgusting tactic used in abusive relationships and in certain films, but here it’s supposedly done out of “love” for a friend to communicate with him after a traumatic event. So yes, the plan to rescue the mind of a friend is to give him a severe mental breakdown where he believes he’s hallucinating.

Like I said, this is NOT a spoiler, this is the premise outlined in the first act of the movie. But you may notice that my description thus far is primarily describing the actions of Will Smith’s friends rather than the Fresh Prince himself. That’s because this movie primarily follows the lives of Norton, Winslet and Peña more closely than the supposed lead of the movie. Smith is a plot device first and an actual character second, because really this movie wants to talk how poorly equipped Peña is to deal with mortality, how Winslet doesn’t feel like she has enough time to become a mother, and how Norton is trying to reconnect with his daughter after he cheated on her mom. To Winslet and Peña’s credit, they try their damndest to make this shit work, but Norton looks like he’s just waiting to pick up a paycheck. Oh yes, everyone’s an absolute bastard save for maybe Will Smith and the head of his therapy group, played by Naomie Harris.

Smith, for his part, is fine in this movie for what little he appears on screen, even though it becomes nakedly obvious he’s just trying to go for another Oscar nomination through the sheer power of crying a whole lot. I hate to break it to him but if The Pursuit of Happyness and Concussion didn’t do it for him, then I severely doubt this movie will put him into nomination territory (though he seems to be conceding to that reality). The role is what really dooms him, as the script gives him little to work with but angrily yell in a few scenes and mostly look at his friends like he’s autistic and a mute.

Actually, let’s beat up the script some more as the movie’s problems begin and end here. The dialogue is painfully melodramatic as well as preachy in multiple scenes to deliver some new age philosophy about mental health (PSA: DO NOT LOOK TO THIS MOVIE FOR GOOD ADVICE FOR TREATING MENTAL ILLNESS). But you can feel with every line the movie beating you over the head with some half-assed message about the importance of time, death, and love when it’s not busy trying to make your main characters unlikable through the batshit plan. And yet, despite the movie’s best efforts, Norton and company come across as the biggest assholes on the plane both through their selfish personal lives and their selfish motivations for the film’s plot as they try to dress it up as some kind of therapy for Will Smith.

But right when your eyes are rolling so hard that they’re in danger of spinning right out of your skull, the film delivers it’s one-two punch of an ending that elicited a vile reaction from me and tears from certain members of the audience. Maybe I’m an asshole, maybe an absolute, unrepentant bastard; but this movie is completely full of shit. I fucking teared up in Room, I got choked up at the end of Spotlight, and I had literal tears stream down my face when I saw The Orphanage. I’m not an emotionless automaton, I can react very strongly to certain movies. But when a film is deliberately and nakedly trying to manipulate me into sadness through cliché writing and unearned twists, I do not cry. I get fucking angry.

It’s taking every ounce of my strength to not tell this movie to go fuck itself with its nonsensical message about the universe and how this film utterly fails to communicate the central message of connecting to others to cope with loss and to repair broken bridges. Mostly because the movie has nothing interesting to say, it merely has its three metaphysical concepts spout fortune cookie logic to our protagonists and wastes perfectly great actors on absolute drivel.

It’d be one thing if this movie was all about utilizing gaslighting as a form of a therapy for someone who is too far gone or to generally debate the ethics in engaging such a practice while actively acknowledging how harmful it can be, but this isn’t that kind of a film. Instead, the film wants to be heartfelt when it’s really manufactured vomit; it wants to be sincere when it’s as fake as the clientele of a plastic surgeon; and it wants to be clever when it’s as dumb as a bag of useless doorknobs. The movie ultimately wants to be a Christmas classic by spreading holiday iconography everywhere, but it contains nothing in reuniting with family and moving beyond lost loved ones. It wants to be It’s A Wonderful Life when it’s dumb shit of a premise makes it as complex as Grandma Got Run Over by a Reindeer.

I was trying to look for something outside of decent moments with the actors, but none of their performances could net the film a RENTAL. I’ve never wanted to let curb stomp a movie more for its bait-and-switch crap more than this movie, so this is getting a…