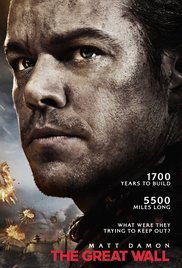 China Trying to Make Their Own Transformers

Hoo boy, China, and I’m referring to the whole country here, I know you love big, bad, messy, and high-budget misfires from America…but you don’t need to go ahead and create your own. I mean, God knows I’ve loved plenty of films from your country, Hard Boiled, Crounching Tiger, Hidden Dragon, and Hero to name a few. So why in God’s name did you get the director of that last film to make his English-language debut with a cinematic clusterfuck of epic proportions?

So this bizarre little tale follows William (Matt Damon), an English (or Scottish?) knight hanging around the Song Dynasty, wandering around Northern China with his Spanish buddy Tovar (Pedro Pascal) in search of Chinese black powder to sell to the highest bidders in Europe. However, the pair come across a monster that they manage to accidentally kill and take proof of their conquest before they get captured by the Nameless Order, an army of Chinese soldiers that patrol the Great Wall of China. It’s at this point you learn that the Wall was meant to keep out a mindless race of green, alien monsters that come out every 60 years and that solely want to eat the entire world. Why are the monsters so fixated on China and not, say, turnaround and consume every other area in the world that doesn’t have a ridiculously high wall…the movie pulls an excuse out of its ass to say that the monsters can only conquer the rest of the world once they’ve consumed the great Chinese Emperor. Because, apparently he’s the end all, be all, of the entire world apparently.

Any who, the white dudes get conscripted into fighting the monsters for the Chinese while they make a secret pact with Willem Dafoe, a knight who’s been stuck on the Wall for several decades, who offers the pair the black powder in exchange for getting the hell out of there. But Matt Damon (because screw character names as he clearly didn’t give a shit) is so awe-struck by how selfless and brave the Chinese are, that he drops his whole thief routine and chooses to become a hero to the China. So we basically have a White Savior flick mixed with a China-is-Awesome piece of propaganda. Far be it from me to tell rich businessmen how to spend their money, but…those two concepts don’t mix together. At all. And this film helpfully demonstrates why.

Matt Damon is our main focal point for the entire run time, and he’s cast in the same role as Kevin Costner in Dances with Wolves and Sam Worthington in Avatar: the Great White Hope that will lead a foreign people to greatness. While it’s kind of insulting that movies are still using this trope, it is odd that the foreign people relying on the help of this Savior are the producers of the film itself. Yes, Chinese investors are the ones who financed this entire production. I’ll get back to the idea of Damon as the White Savior, but you may be curious as to why the hell did Chinese people think casting Matt Damon in this role would be a good idea. Well, it’s a bit complicated so permit me this digression.

China currently only allows 34 films to be imported each year. So that means Transformers, Avengers, Batman v. Superman, and Star Wars all have to compete against each other to get a spot on this 34 movie list every year. However, a loophole exists that if you’re film is financed and produced by Chinese producers, then you bypass the import limit entirely. This explains the rise of companies like H. Brothers (which produced Hardcore Henry) and Legendary East. The latter are responsible for this film and they are, in fact, a subsidiary of Legendary Pictures (producers behind The Dark Knight). So given the American influence and the fact this company’s films can bypass the film limit, Legendary East concocted a plan to hire a bankable Hollywood name and have him star in a big-budget action spectacle that’ll surely attract both American and Chinese audiences. Only one tiny problem: they should have made something that appealed to action fans at all.

The film is a chore to get through, it’s got a pretty weak script featuring characters you don’t give a shit about and a plot that goes on backyard-game logic. It’s where whatever plan you come up with, your dumb childhood pal would negate your plan with some made up bullshit he came up with on the spot. The monsters’ origins are ill-defined at best, kind of implying they were extraterrestrial aliens through some cosmic shit that’s overlooked. They also operate on Avengers-style hive mind where if you kill the Queen, then all the drones quickly die…because I haven’t seen that shit before. Hell, even freaking Joss Whedon wasn’t a fan of this plot device but he wanted something simple to get the film freaking done. Also not helping these monsters? They look like ass.

I harp on visual effects in my review because when it becomes especially clear to me on how bad the script was, then I realize where all the money from the budget went to. So when the effects don’t even look that great, I wonder what the hell was all the excitement going towards. The monsters look like dark green rejects from After Earth (yes, they are THAT bad) and it’s clear that they aren’t really there when the human actors have to interact or fight them. They also don’t look great since the whole film is shot through a dogshit grime filter.

Which is especially bad when you see all the extravagant, colorful armors that look better than the upcoming Power Rangers suits as well as the bombastic and vibrant palaces (it’s only a small portion of the film, since you spend the majority of the time on a boring gray wall). It’s clear that the director, Zhang Yimou, still has an eye for beautiful flair as in Hero; but it’s all for naught when you can’t see how gorgeous the sets are when you can’t actually see them. Speaking of Hero, I know that Yimou very clearly has a love for his homeland and it’s depictions of how awesome China is, but as the script is now shot in English and…his propaganda-style just sounds silly.

Damon spends a solid amount of time admiring the Chinese soldiers and even gazing in awe of how selfless they are. He has a ton of scenes with Jing Tian, who’s a Commander of the Wall’s “Crane Troop” that utilizes bungee jumping to kill the monsters (it’s a lot stupider than it sounds), as they bicker about the West’s attitude towards the self and China’s attitude towards caring for all of its people. But the dialogue feels painfully forced in the English language, and it feels like student actors trying to read these lines with little to no success.

But all this “rah-rah-China” stuff just looks strange when Damon is heralded by the Chinese soldiers as being an exceptionally talented soldier pulling off bow-and-arrow tricks that would make Legolas say “oh that’s some bullshit right there.” So you have a film that wants to cast a Hollywood star as the Chosen One hero but it also wants to be a film celebrating how awesome a country is…when the Hollywood star has zero connection to said country. The incongruity of tones leaves you with a pretty mess of a film.

While I didn’t hate this movie, I find very little to recommend in it. The special effects are garbage, the characters are stale, and I’ve harped on plenty why this script doesn’t work. Still, some of the fight choreography clearly had some work put in, and I did admire some of the costume work…even when you can barely see it through the odd dim-lens. Not an absolute train wreck, but don’t worry your head about seeing this. Going to give this a very low…

2 thoughts on “The Great Wall Review”