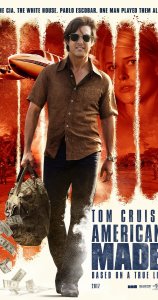 Tom Cruise may have the body of an ageless vampire, but people wouldn’t still be flocking to see his movies if there wasn’t much else to him over the course of 40 years we’ve seen him act. Hell, he’s saved mediocre films with his charisma alone; but even he can only do so much as it was with a certain disastrous reboot. But whether the film is good or bad, the man usually plays the same kind of character, i.e. a fast-talking  scoundrel in way over his head. While it worked well for Edge of Tomorrow (or Live. Die. Repeat. depending on what title the studio is currently selling that underappreciated gem), it didn’t work for The Mummy. But can it work for a biopic about an infamous drug smuggler who got roped up in a massive conspiracy between drug cartels, the CIA, and revolutionaries in Central America? Time for another multi-paragraph answer!

So Barry Seal (Cruise) is a TWA pilot during the late 1970s when he’s approached by a CIA agent known only as “Schaffer” (Domhnall Gleeson) for illegally smuggling Cuban cigars while on the clock for his airline company. Rather than busting him, Schaffer offers Seal the simple task of flying a plane loaded with cameras over Central America to offer intel on Soviet operations in the area as well as dropping off intel and cash to savory people like Manuel Norriega. While earning some decent cash working for the CIA, he ends getting up approached by Pablo Escobar and the Medellin Cartel to smuggle drugs into America, and Seal (believing himself as capable of playing two different sides) agrees in exchange for tons of cash. From this simple set up, Seal finds himself getting involved in the United States’ funding and armament of the Contras in Nicaragua while also serving the Medellin Cartel forcing him to balance his life as a spy, a drug dealer, and the husband to a wife (Sarah Wright) who reluctantly accepts this bizarre arrangement. Even until this messy alliance of various organizations inevitably spirals completely out of control.

As a piece of historical fiction, the film presents its mix of Cold War espionage and drug war dealings competently with hints at a more stylish take on the subject. See, Cruise’s Barry Seal is the one narrating this little story, but it’s the good kind of narration with personality and flavor as well at the typical Cruise charm. His subtitles to denote time and locations are also crudely written as well. I liked the approach, but I honestly would have appreciated it if the film had taken far more creative liberties with the subject than it was already doing.

Let me digress for a moment to bring up one of my favorite biopics, Amadeus. Not only is it superbly well acted drama with many fits of comedy, but it deftly handles the topic of historical accuracy in the most clever way imaginable. See, while our title character was Amadeus Mozart, the story is related to us by a jealous colleague of the famous musician, Antonio Salieri, in his old age. See, the reason we’re being told this story from Salieri’s perspective at all is because Salieri wishes to confess to murdering Mozart, and describes why and how he allegedly did it. While Amadeus was heavily criticized and accused of many historical inaccuracies regarding Mozart, everything you’re seeing is from a different character’s perspective in a senile old age. Hence, we have the concept of an unreliable narrator imparting the story, which forces the audience to discern fact from fiction. So what does this have to with American Made?

Because the film flirts with unreliable narration, but never follows through with it. Barry Seal is clearly shown to be a fool for thinking he’s playing all these different entities, when really he’s only being allowed to live precisely because he’s a useful idiot. And while the film occasionally throws in aside from Cruise’s Seal about absurd the situation he finds himself in gets, the movie is also playing the narrative pretty straight especially in its incredibly tonally mismatched denouement featuring title cards that show off funny and tragic things that occurred as a result of Barry Seal’s actions. And believe me, the likelihood of the real Barry Seal running into the likes of Norriega, Escobar, Oliver North, and other members of the Reagan administration are extremely low. Apparently, we were given a more “believable” version of events as there were multiple scenes cut where Tom Cruise’s Seal interacts with Bill Clinton and George H.W. Bush as well. And if that sounds preposterous to you, then know I was kind of let down that the film didn’t go down this route.

Because it would have fit with this more comedic take on Scarface of a down and out man becoming a multi-millionaire through crime while bumbling his way to the top rather than outright murder. The film presents itself as a comedic take on the subject, which is the right way to go concerning how absurd the real life events actually were. But the issue is that it should have been a dark comedy, rather than a dramatic comedy. If it did, the movie would have had a more lasting impact on me the way Pain & Gain did (and that’s a damn Michael Bay film).

Instead, I liked what I was watching on screen, but after two days since seeing the movie, it’s already escaping the confines of my overstuffed mind. While I did like the exchanges between Cruise, Gleeson and even Sarah Wright, little else about the movie sticks out in my memory. There’s no narrative tension either, even as our main character is put through increasingly dangerous situations up to and including a straight up plane crash. That may be because the film is rushing to cram in the near decade-spawning tale of a man involved with unsavory characters in a quick hour and 45 minute piece. So on one hand, you’re never bored; but on the other, you’re given no opportunity to breathe and take a moment to reflect what the hell just happened.

Still, for people who want to see an entertaining biopic yarn, I think you’d enjoy this well enough in theaters, but for a low, low price. Everyone else can enjoy this as a straightforward RENTAL, but I’ll give this a very low…