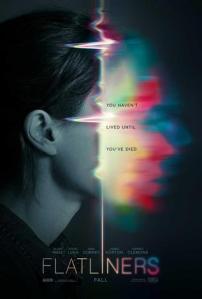 Title speaks for itself

Some films need no introduction…because no one’s barely even heard of this garbage. But one fact you need to know going into this movie…it’s being distributed by Sony Pictures. Ho yes, children, purveyors of more flaming wreckage in the past year than any other studio. You already know we’re in fantastic company right now as they take on yet another old property as they attempt to remake it for modern audiences. How badly did they mess up? Let’s put it this way: this is, by far, the dumbest movie that thought it was smart since The Accountant.

So Ellen Page (to hell with giving you names, not in the mood) is a medical student that’s hellbent on knowing what happens to people when they die. So she ends up roping several of her classmates, including The Vampire Diaries‘ Nina Dobrev, James Norton, Kiersey Clemons, and Diego Luna (all slumming it), to basically induce Ellen Page into stopping her heart and reviving her after a few minutes. While this is a phenomenally stupid idea for an experiment, when she comes back from the brink, Page’s character realizes she can recall old talents she once had and is able to excel in class under the tutelage of their Professor Kiefer Sutherland (who starred in the original film, apparently claims this film is actually a sequel to the original, but he plays a different character name and has no knowledge about the stupid experiment so what the hell was the bloody point?). Soon the other med students start flatlining to enhance their intelligence (because they are idiots) until they all realize they start experiencing terrible hallucinations out to destroy them.

Look, the premise is glue-eatingly moronic. You have well educated people performing an atrociously terrible experiment on themselves, but similar set ups have been utilized effectively by other films like Hollow Man, The Fly (both versions), and the original 1990 Flatliners. Difference between this film and the positive examples I mentioned is the consequences of performing said experiment are indeed horrifying and there was a certain degree of care given before going into the experiment. Flatliners (2017) fails on both counts because 1) Ellen Page gets two struggling med students to try to bring her out of heart failure and only survives through the random appearance of a more talented student played by Diego Luna; 2) there was no experimentation with non-human test subjects before trying everything out on their dumb asses; and 3) the actual “horror” part of this horror movie is about as scary as a smashed jack-o-lantern.

There are barely any jump scares in the hour and 45 minute run time, zero tension to keep you invested, and a paltry 3 minutes of disturbing imagery on loan from the most generic haunted house you could attend this holiday season. It’s baffling enough when other films try to sell themselves as horror movies without having anything terror-related, but a film that was itself a remake of a cult horror classic not having anything scary is just plain lunacy. So what the hell does this remake have if it’s breathtakingly dumb and not scary? Well, it’s a science fiction piece as written by the most boring person on the planet.

Look, I’m fine with soft sci-fi. Hell, it makes for goofy fun from time to time. But do bear in mind, that means your visuals have to be something interesting to look at, otherwise people are not going to care about your ridiculous premise. Critiques against the original Flatliners aside, at least that film was known for its unique sets, psychdellic hallucinations, and a genuine sense of style courtesy of everyone’s favorite flamboyant cockup, Joel Schumacher. Nu-Flatliners instead was filmed in the most drab color palette imaginable, with hallucinations that aren’t even fun to look at. I can’t emphasize enough how boring this film proceeds, and not helping is that its cast are practically sleep walking through.

I have seen many of these cast members in far better works (yes including XXX: The Return of Xander Cage), so to see them all wallow in this muck is just plain depressing. Ellen Page is in dire need of a hit, and she clearly showed up to work compared to her cast mates (who were all just collecting a check); but it’s clear she was squeezing every bit of life out of this hackneyed script she could. Nina Dobrev was barely given anything to do, hell she doesn’t even experience the worst of the hallucinations; and given the fact I’ve seen her play multiple roles within Vampire Diaries, this whole mess was a profound waste of time for her. Meanwhile, Diego Luna is simply there to have a sexy accent and…that’s about it. He’s not bad, but as with Dobrev, he was given jack shit to do.

My biggest gripe against the film is that the hallucinations haunting the protagonists are the most weak sauce nightmares imaginable. Okay, two of them are dead people that haunt two of the med students for sins they committed, and those do serve a decent narrative purpose (even if they couldn’t scare a kindergartner). But the rest of the gang face hallucinations from people who are still alive that the students did shitty things to. And without wishing to spoil (but who seriously gives a damn if I do?), the resolution to all of these nightmares is the most pathetically limp justification I’ve ever seen.

I kept dosing off, but the worst part about this gallon of donkey urine is that it’s NOT that terrible. Maybe because I’ve tasted death multiple times this year, maybe because my tolerance for awful movies is higher than average, but Flatliners (2017) is more of a boring kind of bad. The kind of movie if you saw half-drunk, passed out on your couch at 4am, barely paying attention to it, and in your hungover state you’d say “that wasn’t so bad.” Only until after you sober up, try watching it again, and realize it as more embarrassing than any drunken dance you did the night before.

These kinds of films make me angry not just because they’re not good, but because there’s not much else to hate about it. Stick around for tomorrow, and I’ll show you something truly awful. For now, this movie is getting a high…