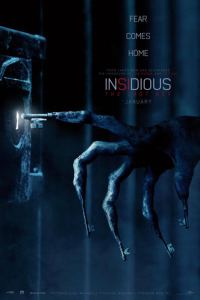 The Insidious series is one of those horror franchises that I never quite “got.” It’s world of demons messing with regular folks that are assisted by a psychic and her two awkward sidekicks; and yet, none of it feels unique enough for me to want to hang around their world for very long. Part of the problem is that the character development is basically nonexistent, and the elephant in the room is that it primarily relies on the exact same jump scare: a ghost/demon pops up right behind another character after a quick scene change. It got old very fast to the point that I skipped the third installment completely and find myself here with Insidious: The Last Key.

So series regular and magnet for ghosts, Elsie Rainer (Lin Shaye), has been experiencing memories of her unhappy childhood when her powers to see the dead first manifested and she was physically abused by her father (Josh Stewart) whenever Elsie talked about seeing ghosts. Coincidentally (but not really), she gets a call to perform an exorcism on the very house she grew up in and thus she and her two awkward ghost-hunting partners, Tucker (Angus Sampson) and Specs (Leigh Whannell), saddle up to Five Keys, New Mexico to give Elsie some closure. Along the way, she has to deal with meeting up with her long-lost brother Christian (Bruce Davison) and his two daughters, Melissa (Spencer Locke) and Imogen (Caitlin Gerard), who get caught up with the demon that haunted Elsie when she was a little girl: some dude with a messed up face and keys for fingers.

The monster of this movie is nowhere near as scary as the first film’s Darth Maul knockoff, partly because it looks like a cheap Freddy Krueger clone with all the fun personality sandblasted off while being replaced by two things: jack and shit. The demon thing is only scary in one single scene…and the producers already spoiled their money shot in the friggin trailer when it uses the key fingers to silence a woman. In all honesty, this scene was a perfect nightmare-inspired sequence that gave me a tiny glimmer of hope that the filmmakers behind the latest Insidious could somehow deliver a far more entertaining film than the last few I saw. So you can imagine a sad trombone playing as I left the theater, because that key scene was literally the best this movie had to offer.

This horror movie was as boring as dishwater and as scary as The Bye Bye Man, it’s only saving grace that it has some decent acting that saves it from oblivion. The film lacks any tension for its first hour before it finally decides to introduce some stakes in the final 30 minutes, so for the most part I found myself twiddling my thumbs and blowing raspberries as I waited for this film to just get on with its story. You see, the first hour deals with Elsie remembering her troubled past and doing the usual psychic wanders around a creepy house looking for ghouls to chat with, but all narrative focus pisses about looking for a goal.

Now I get that the focus of the film was all about this elderly woman reconciling with her distraught and abused past, but the problem is that we barely know her as a character so sympathizing with her plight is made all that much harder. Fans of the series will know her from her previous appearances, but she was barely given any development in those entries in the franchise either. I will give the movie credit when it shows you Elsie getting abused as a kid, the scenes get incredibly intense but the film finds a way to lose that tension immediately by trying to get a cheap jump scare (or rather, the same scare repeated over and over again) instead of dealing with the horror of living with a monstrous father.

To me, that’s the film’s greatest sin: it constantly fumbles solid opportunities that are practically gift wrapped for some superb scares. As I’ve mentioned many times before, effective horror films are all about creating a nightmare version of real life concepts that terrify us. Whether it would be paranoia as with Get Out and It Comes at Night, or fear of burgeoning sexuality as well as STD’s in It Follows. Unlike the previous Insidious films, the plot point about dealing with an alcoholic, abusive father is as grounded as you can get and indeed is ripe to delve into all sorts of concepts like blame among siblings, survivor’s guilt, shame, etc. All of which are paid the tiniest amount of lip service in The Last Key before the film forgets what to do with them and goes back to dicking around with long shots of empty corridors before ending on the above jump scare it’s been using for half a decade.

The technique has really been the only string to Insidious‘ bow, and that’s pretty unfortunate as the series has come closest to making a “serious” take out of Ghostbusters more so than any other franchise has been able to. That’s mostly thanks to Lin Shaye as Elsie, who is a very solid actress all things considered. She reacts appropriately to everything she faces, whether it’s something humorous or it’s something scary, and she even has an intriguing backstory that works on paper but fails in execution on part of the screenwriter. Hell, I’ll even cut her two sidekicks of Tucker and Specs some slack as they only moderately annoy me because they both act like creepers that their mother-like Elsie has to pull their ears in order to get them to focus. But the biggest problem is that they can only ever by stereotypes and not fully fleshed out characters, which would help audiences give a damn when they all wind up in danger.

Ultimately, that’s why I can’t recommend this film to anyone interested in horror. The character development is practically nonexistent and you can’t find yourself rooting or being invested in their lives. The movie meanders about for a solid 2/3 of its run time before finally injecting some peril that directly affects our protagonists in some way. And the threat that’s causing everyone’s problems is just plain stupid-looking…oh yes and it gets taken out in the most Saturday Morning Cartoon way imaginable. Without wishing to spoil, let’s just say something akin to “the power of love” is what ultimately dooms Mr. Key Fingers and it’s WAY dumber on film than it sounds.

For some decent acting on part of Lin Shaye and the supporting cast though, I didn’t absolutely detest the film. Hell, it might give fans of the series something to hold on to as they swear up and down that this is effective horror. So for the cast alone, I’ll give this an extremely low…