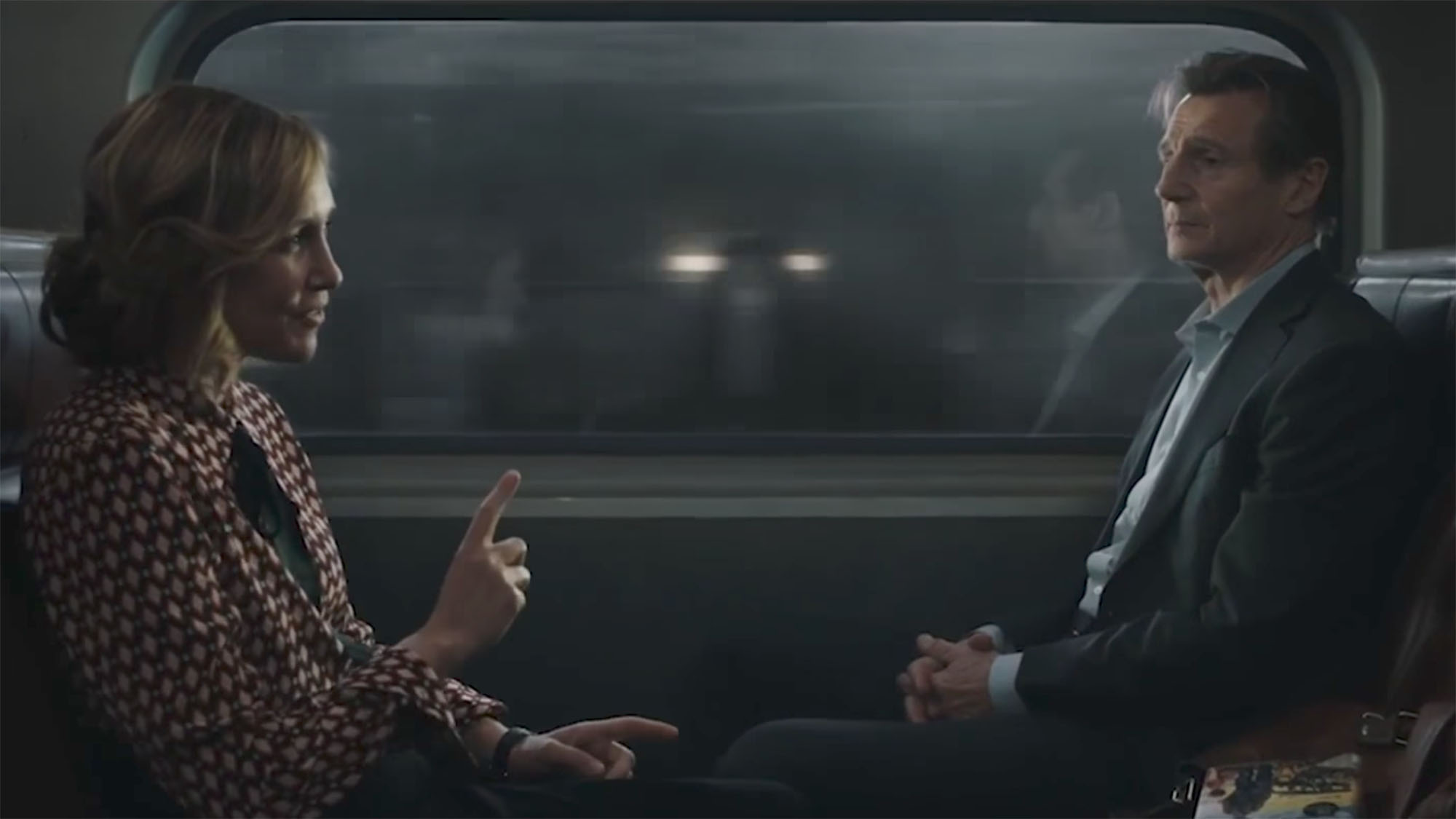 End of the line, Neeson

Liam Neeson has had an odd career trajectory. He became famous through major dramatic performances that culminated in his Oscar-winning portrayal of Oscar Schindler, but then he became an action star in his mid-50s after the major success of Taken ten years ago. Since then, he’s been cranking at least one action flick per year as a character who seems to be some permutation of a guy with “special skills” who then goes and beats up a bunch of dudes. And to be honest, we’ve been experiencing a series of diminishing returns as he makes these movies year after year. So welcome to the 2018 model of this formula: The Commuter.

Neeson plays…screw it, he’s Liam Neeson, I’m not going to bother with his character name. Here he’s supposed to be a decent family man and an insurance agent in Manhattan before he’s unfortunately laid off from his job. With his son going to college to soon, money preoccupies his thoughts as he boards the train for his usual commute home when a mysterious woman named Joanna (Vera Farmiga) sits next to him. She challenges him, as someone who rides this train everyday, to identify one person who usually doesn’t make this trip and he’ll be paid $100,000. Neeson is tempted very easily into this game, but before long he realizes he’s way in over his head as Joanna discreetly begins threatening the lives of Neeson’s family as well as every other soul on board this crazy train in the most convoluted scheme to solve a simple problem for a bunch of criminals since putting poisonous snakes on a damn plane to kill one friggin’ guy.

But we get ahead of ourselves…the movie is, if nothing else, a generic ripoff of a Hitchcock-like set-up: normal straight-shooter guy with loose morals has one bad day where he gets roped into a massive conspiracy and has to figure a way out of this mess. And to his credit, Liam Neeson has gotten quite good at portraying this kind of everyman, even with his thick Americanized Irish accent. And compared to his action career low point of Taken 3, he actually looks like he gives a damn to provide a decent enough performance before the film decides to turn him into the same secret badass he’s been playing in every movie since 2008. Yes, you find out he was former cop which makes him the ideal candidate to assist in Joanna’s scheme and be able to get into close quarter combat with various individuals on this train…it’d just be nice if the fights were remotely fun to watch or even necessary to the plot.

Actually, the whole “ex-cop” angle feels entirely vestigil for this film, and seems to be there exclusively so you have Neeson as yet another guy with “a specific set of skills.” Which doesn’t fit the whole “everyman” angle the movie so obviously wants to Liam Neeson to be, so any tension that Neeson could be in severe danger from whoever wants to fight him is immediately lost because, internally, you’re telling yourself he’s just the same guy as he was from Taken. And I know Neeson has made it quite clear that he doesn’t want to return to that franchise, but it’s not helping his case when he keeps taking jobs from people who just him to do his shtick from that film over and over again. Also not helping him is that he continues to take projects with eerily similar premises: he’s forced to use skills he’s acquired over a long period of time to investigate and uncover a solution to a problem posed by a bunch of criminals who very much want him dead.

The sad part about The Commuter, is that bizarrely throws in additional characters to try to differentiate itself from other Neeson affairs. See, these characters could have been used for the film’s benefit: this movie is, after all, a mystery where Neeson has to suss out an identity that’s been kept secret from him for one reason or another. Hell, the opportunity for a Murder on the Orient Express situation of a detective interviewing various individuals was practically slapping its butt cheeks at the writer to take advantage of a solid premise, but that’s not what was important to three screenwriters on hand for this film. So all of the focus falls on Neeson instead dodging multiple dangers posed by people connected to Vera Farmiga’s character, while all the possible suspects on board are generic stereotypes of various kinds of New Yorkers who are weirdly given closure to tiny arcs in the end of the movie that fall completely flat and feel totally undeserved.

Also wasted? Some genuinely great actors like Sam Neil and Jonathan Banks (Mike from Breaking Bad) in bit roles that feel more like cameos than genuine supporting roles. As in you completely forget they were in the movie until the end credits drop their names in the cast list. Which contributed to my overall frustration with this film, but perhaps the most infuriating aspect about it is that it’s not bad. I couldn’t find anything here that was genuinely incompetent, from the writing to the acting. Everything just feels so safe, so by-the-numbers, that I can’t get even muster an iota of anger towards the movie. I was just merely bored by the whole affair as it keeps reminding me of much better products like Strangers on a Train or even Snakes on a Plane (which at least benefited from an absurd premise that was laughable).

Though speaking of one of the highlights of Samuel L. Jackson’s career, this movie doesn’t initially make it apparent as to what’s really the antagonist’s main goal until the very end of the film. Keeping their motivation a mystery to solve was a smart move on the filmmakers’ part, because once you do get to the end and you see how the whole grand plan plays out…you can’t help but say, “That’s the dumbest goddamn idea I’ve ever heard.” And what’s angers you more is that there were at least 101 different ideas these antagonists could have solved their problem without factoring in Neeson and without endangering the lives of dozens of other people, thereby making their initially small problem into an even larger clustermuck. It’s the Die Hard dilemma all over again of concocting a much more dangerous and attention-grabbing scheme rather than keeping it subtle. But Die Hard had humor, a charming protagonists, multiple support characters on both sides of the conflict with unique personalities that added to the drama. The Commuter has NONE of these qualities.

It’s a typical movie you’d see playing at 4pm on cable on a lazy Sunday afternoon. Definitely not worth a theater visit (as I take the bullet for you), but you might enjoy this as a low…