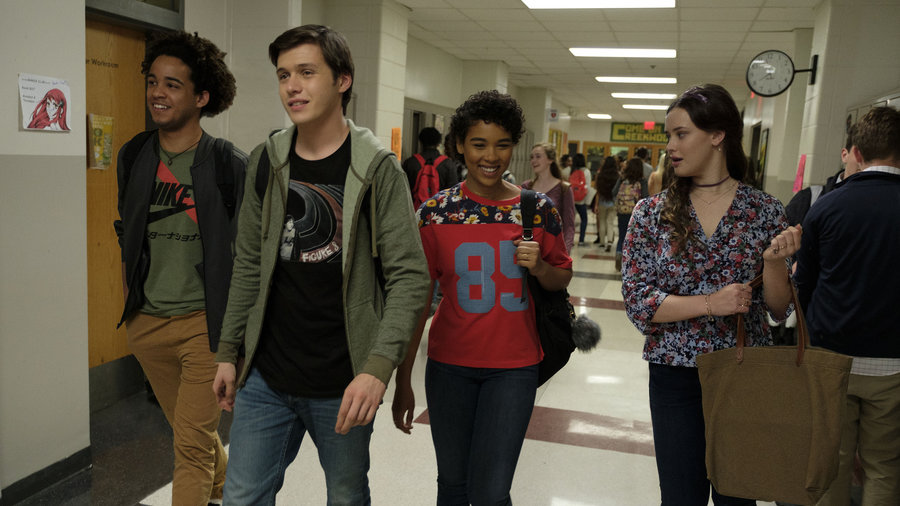 What a pleasant surprise to see in the middle of the mediocre month of March: a decent romantic comedy from the perspective of a teenage boy coming out of the closet and developing his first relationship with a fellow young man struggling to be honest about his sexuality with people. And all of this comes to us via…the long-running producer/writer on CW Shows like Riverdale and the Arrowverse as well as a lazy romcom called Life as we Know It? Well…I’ve been surprised by artists before, but not quite as jarring as a 180 in terms of quality.

So Simon Spier (Nick Robinson) is your average teen living in the city where everyone loves to get tax breaks for filming, Atlanta. He’s got a happy home life with his parents (Jennifer Gardner and Josh Duhamel), sister (Talitha Bateman) and solid friends (Katherine Langford, Alexandra Shipp, and Jorge Lendeborg, Jr.), but Simon struggles with the fact that no one knows that he’s gay. However, his desire to meet someone like him is finally fulfilled when one of Simon’s friends tells him of an online confession posted by an anonymous student at their school laments to be in a similar predicament. Simon takes a plunge and decides to e-mail this mysterious stranger known only as “Blue,” and the two end up being more alike than he could have wished for. However, when another dickhead of a student (Logan Miller) stumbles on Simon and Blue’s correspondences, our protagonist must then navigate through an overload of teen drama, angst, and awkwardly funny hi-jinks.

My description may read a little dry; but keep in mind, I’ve struggled to summarize slice-of-narratives before, even of one I genuinely love. And Love, Simon has elements of this style of filmmaking, but it’s far closer in kinship to a 90’s romcom, back in it’s heyday before Katherine Heigel single-handedly sabotaged the entire genre. However, this film takes on the best elements of a romcom while it removes the chaff from its presentation. So you end up getting a very relatable protagonist, funny side characters, a parade of potential paramours that don’t work out for our main character, well-written drama with some authentic emotional stakes, plenty of solidly-timed jokes, and a character arc that feels earned. Now the reason this film works as well as it does is thanks to how well everything is put together by a competent director, solid screenwriters, and a healthy cast of thespians who can switch between comedy and drama on the fly.

Of the whole cast though, Simon’s actor in Nick Robinson is the most crucial in selling you on the movie’s emotional journey. Now, I wasn’t expecting much of this kid as I had only seen him in Jurassic World, which I recall wanting him and his character’s brother to get eaten there for how useless they were to the plot. However, Robinson demonstrates a proud range of talent here, displaying comedic timing as well as dramatic chops and the ability to alternate between the two extremes when the scene demands for it. The trick is tough to pull off, by Robinson makes it look effortless as he also draws you into his character’s struggles with being honest about his sexuality to his friends and family. But Robinson also has the unenviable task of trying to make you care about a love story in which you really only know one of the two lovers.

See, you’re never provided with Blue’s real identity throughout the film (I won’t spoil if the movie reveals who it is) but that doesn’t stop Simon from envisioning multiple characters he comes across as his possible secret admirer. This gives the film a neat hint of mystery as you and Simon try to piece together who Blue really is, providing you a solid narrative framework that allows the film to reinforce its theme about the difficulty in coming out of the closet; as Blue reveals to our main hero how their online conversations have given him enough courage to reveal his sexuality to his loved ones. Close parallels are seen in Simon’s own journey in coming out of the closet, even as he tries to grapple with one dickhead of a classmate who seeks to control that moment from Simon.

If I had a critique of the film at all, it’s that this element of controlling one’s time and place in expressing their sexuality muddles the film a bit. It’s not a deal breaker mind you, but I’m not sure if the movie was trying to make a statement about outing someone else as gay. The film tackles the issue certainly, but I’m not sure if the movie had an idea of what it was going to say besides “that sucks.” It does, and the movie very helpfully demonstrates the fear people have of being identified as homosexual, but it felt to me like the movie wanted to say more and decided to stop in order to go back to being a regular romcom.

While somewhat disappointing, the aforementioned romcom elements are at least strong enough that I can forgive the twists the movie takes. Hell, I saw Jennifer Gardner and Josh Duhamel give the best performances I’ve seen either give in more than half a decade, so I still walked away impressed from the theater. And while Love, Simon may feel somewhat predictable towards the end, I think the movie certainly earned many of its goals and giving me fully fleshed out characters that I got to tell people it’s worth a look. I mean, it managed to make millennial teenagers sound like how they normally would speak as opposed to some marketing executive penning in lines muttering to himself “this is what the kids must like.” Props to screenwriters Elizabeth Berger and Isaac Aptaker (both script partners on multiple television shows like This is Us and About a Boy), for saving us from such mediocrity.

Some adults may get a kick out of this, but I think the film will do gangbusters among younger generations and definitely appeal to more of their sensibilities. So for getting so much right even as it stumbled with one major thematic element, I’ll give this a low…