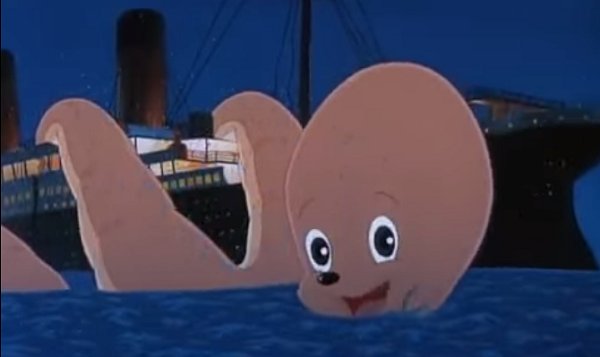 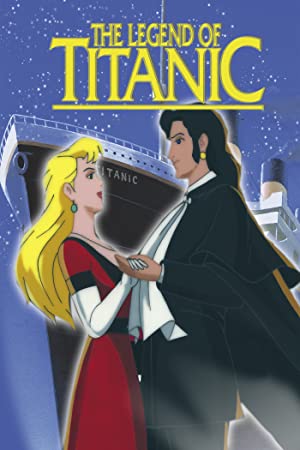 And now for something completely different…

So, my return to film critique coincidentally came in the middle of a global pandemic that has shut down movie theaters and caused Hollywood to lose their damn minds. You might have heard about it. So with movie releases being on the slim side, I figured it was time to start to a new segment I’d like to call…

This is where we will take a look at films that were either critically panned or commercially bombed upon their theatrical release or were never even given the chance to shine on a silver screen. My aim is to check out some movies that either are cult classics or deserve the moniker, AND to tear apart some truly spectacular screwups that managed to escape general audience’s humiliation the first time around. Today, we start in the latter camp with an animated adaptation of the sinking the RMS Titanic, The Legend of the Titanic. “Wait a minute,” I hear you puzzle through the World Wide Web, “someone thought it was a good idea to animate a catastrophe where hundreds of lives perished? For children?” Yes, indeed my dear reader. You nervously follow-up with, “Did…did they succeed?” Oh my sweet merciful Christ, no, but THAT is what’s going to make this journey into Hell so much fun.

As you can already tell from the photos, the animation doesn’t look swell. So you might want to check out the trailer here, before we really cut into this cadaver. So this animation was crafted by an Italian studio calling itself Mondo TV, which had aspirations of releasing a feature film following 15 years of televised cartoon shows. The studio’s…inexperience with movie production is painfully obvious at first blush, and they did themselves no favors by putting The Legend of the Titanic into development shortly after the worldwide domination of James Cameron’s Titanic in late 1997. As the animation was released theatrically a mere two years later, you now have a rushed production schedule on top of the filmmaking inexperience to concoct a perfect storm of a calamity, the likes of which has never been seen before since, well the sinking of the Titanic ironically.

I’ll get to ripping apart the concept in a bit, but let’s touch upon what only the most altruistic saint in all of Heaven could charitably call a “plot.” We start in modern day New York City, as a fat old mouse regals his grandchildren of his seamen (*insert childish noises here*) days, when his kids want to know more about the sinking of the Titanic. Especially when he explains that the hundreds who were missing and died was just a “big misunderstanding”. With this flying start, we flashback to the day that the Titanic left port as a beautiful, rich, young woman steps out of a car and gazes for the first time at the magnificent splendor of the ship but must also contend with being forced to marry an older man of high status and…no your eyes don’t deceive you. I’m not talking about James Cameron’s Titanic, I’m still talking about this animated abortion of a film. Don’t worry though, before you decide to disregard this crap as nothing more than a cheap imitation of a far better film, the movie quickly brings in the talking mice.

But right when you think the animators have finally stopped their ripoff game, don’t worry because the design of the various mice are basically traces of Speedy Gonzalez shorts and An American Tail. The main mouse, Connors, looks suspiciously like Fievel Mousekewitz and his Brazilian friend Ronny looks like a palette swapped version of Tony Toponi. Oh yeah, there’s a Brazilian mouse in here who really likes to play soccer, if you were wondering why the movie would bring up his distinct nationality even though the English voice actor decided on a generic as hell American accent for said character. People…this is the first five minutes of the damn movie, and the problems are as obvious to any one with a functioning brain.

Oh snap, I haven’t even touched upon the male human love interest yet! So instead of Leonardo DiCaprio’s Jack, we get a Spanish prince named…Don Juan. Yes, really. And for some reason this Spanish prince has an entourage of gypsies from Andalucía, none of whom have a hint of Romani or Spanish dialect in their speech. Slap me sideways, ALL the characters sound as American as a McDonalds’ cheeseburger; so it’s a total oddity why the movie keeps bringing up the characters’ nationalities. Regardless, Don Juan and the female love interest , I mean Elizabeth lock eyes from across the pier at each other and…do not speak at all each to other. But Don Juan does sniff Elizabeth’s glove in a really creepy way, so there’s some chemistry for you.

Anywho, this simmering sexual tension is enough to infuriate the film’s main antagonist, Maltravers, a scheming rich douchebag with a fat lackey that looks like LeFou from Beauty and the Beast (Christ these animators must be kleptomaniacs). See Maltravers is only out to marry Elizabeth since she’s the daughter of a wealthy duke who has extensive whaling rights that our villain wants to exploit. I do appreciate that the filmmakers try every chance they get to make this look evil as possible by having him sneer everywhere and giving him an eyepatch. Elizabeth isn’t really down with this whole arranged marriage to Maltravers, which she’s being forced into by her stepmother…do not play a drinking game every time you spot a clear ripoff in this movie, you’ll be dead in the first thirty minutes. Which would be a shame, my pretties, because we haven’t got to the magical moonbeams yet.

So Elizabeth, despondent over her situation goes to the rear of the ship to literally cry about her fate. That’s when a flying dolphin cheers her up by explaining that since her tears were touched by magical moonbeams, Elizabeth has now gained the ability to talk to animals, including weird ass ones who can break physics apparently. This also comes in handy for the mice to be able to speak to Elizabeth, especially Ronny who has the hots for the human. Don’t worry, Connors points out to him the difference in their species to which Ronny replies, “Well if there’s one thing I’m not, and that’s a racist.”

Right now, you might feel like your brain is turning into blancmange as you try to comprehend my tale. Do not be alarmed, this is part of the process. Anyways, the mice encourage Elizabeth to reject the arranged marriage to Maltravers and ruin her father’s plans. Cut to a scene with the dad, and he’s weirdly okay with Elizabeth abandoning the marriage after he insisted this whole plan was for the best just the day before. Pretty abrupt resolution to this subplot, but I’m not complaining. But wait! What the hell happened to Don Juan, the erstwhile love interest of this piece?

Oh he’s moping around the Titanic wanting to see Elizabeth again…even though he doesn’t even know her name. So the talking animals conspire to make the lovebirds meet at long last, and after just exchanging a grand total of five words (yes, I counted), the pair kiss as the talking animals celebrate with jazz music and a dance that feels like an epileptic seizure. These animators…it’s like they ripped off James Cameron’s Titanic while it was on mute and just kept making shit up as they went along. They have no concept of drama or threat, which is how we veer into one of the most offensive parts of this movie.

“Oh really Chris? There’s something more offensive about trivializing a tragedy where hundreds died by animating it into a story with talking animals,” you ask incredulously over the Internet. Oh my dear viewer, you could not anticipate the psychotic lengths this film will go to. See, with Maltravers’ scheme to marry Elizabeth in shambles, he defaults to Plan B: hold Elizabeth’s dad at gunpoint, force him to sign over all the whaling rights to Maltravers, flee on a lifeboat with his henchman and the Duke’s wife (who’s in on the scheme for some reason), and he’s going to sink the Titanic. I feel your eyes go wide as you say, “…wait what?!”

Worry not because Maltravers is a practical man. He alone could not steer the Titanic into an iceberg, such a thing would be completely implausible. You see, he’s hired an anthropomorphic shark named Mr. Ice to sink the Titanic. A shark who wears prison garbs and talks with a faux-Brooklyn accent, who resolves to sink the Unsinkable by getting a giant octopus named Tentacles, who has a puppy face for some reason, to toss a friggin iceberg straight into the Titanic’s path as Mr. Ice and his gang of sharks hold the rudder to kill everyone on board.

This whole description might read like the deranged ramblings of someone in a deep fever dream, but I swear on a stack of bibles that everything I have described to you is true. So the mice seek out to help the humans call for a ship to save their dumbasses. Their assistance comes in the form reconnecting telegram wires that they cut in the first place (I’m not getting into why they did that, it’s far too stupid). But the wires are restored through the brave sacrifice of a fat mouse who allows the wire to be restored using his moustache. And this my friends, is one of only TWO deaths in this whole damn picture.

That latter death comes from the giant octopus from earlier sacrificing himself to keep the cruise ship from breaking, allowing everyone on board to get on lifeboats…including the captain. What? You didn’t know the Captain of the Titanic survived? These animators are here to right a wrong, my friends. Anyways, yes the giant octopus dies while Elizabeth, Don Juan, Connors and Ronny escape the sinking and manage to make it to New York City. There, Elizabeth and Don Juan get hitched, and even the mice enjoy their own wedding between Connors and Ronny’s sister (I neglected to talk about her because the movie certainly did). Oh yeah, Maltravers and his gang also got lost and probably froze to death, but the movie just kind of forgets about that fate. That’s when a shocking twist is revealed: the giant octopus survived as did the fat mouse who died by wiretap electrocution. Why the fuck was this necessary? Only God in His infinite wisdom my children.

And that, was The Legend of the Titanic. One of the most baffling cartoon films I have ever seen in my entire life. Sometimes, it’s just amusing to talk shop about some frankly insane pieces of cinema, offensiveness and all, and I’m hoping I gave y’all a good chuckle about this craziness. And if you’re curious about this catastrophe, you can check it out for free on YouTube. Otherwise, you can sit blissfully with the knowledge that this madness exists…as do other animated Titanic films.

Until, next time friends.