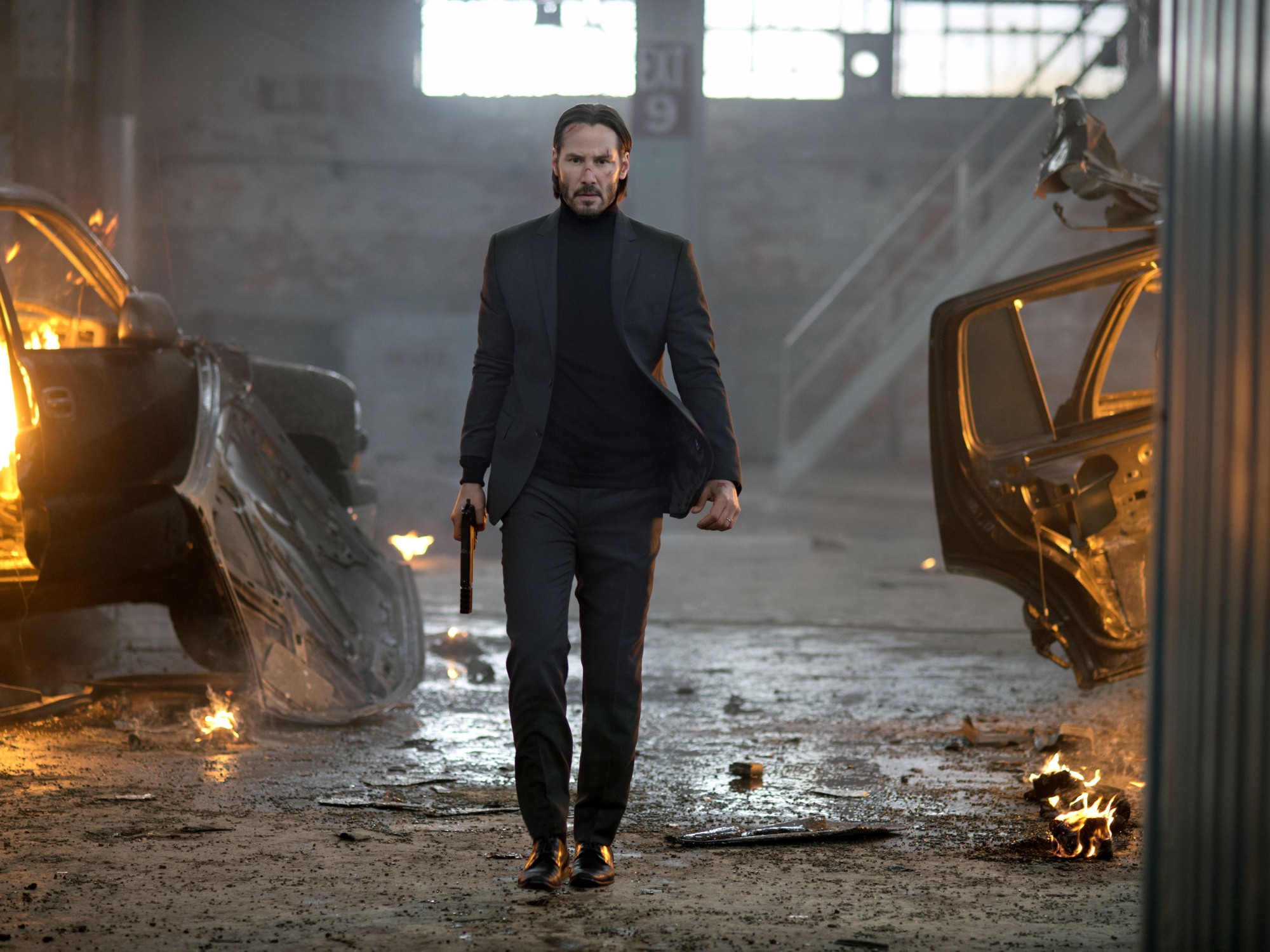 Films don’t need to reinvent the wheel every time I go to the theater. Sure it’s nice when you see something new, interesting, and daring with story or camerawork, but some films usually play it safe and “go through the motions” as it were. Take John Wick for instance, did it doing anything new for action movies? No…but rather than go through the motions and becoming something mediocre like The Equalizer or Non-Stop, it loads up on a healthy dose of style as it takes you on a ride.

The movie opens with Keanu Reeves as a guy named John, who is grieving as his wife dies from an illness. But after the funeral, John’s wife arranged the gift of a cute puppy to help him overcome his sadness and forge a new start. However, said new start never gets off the ground when some punk ass Russian gang members led by Alfie Allen (Theon Greyjoy from Game of Thrones) steal John’s car and kill his puppy. Unfortunately for Alfie and his friends…they have no idea who they just fucked with. Keanu Reeves is John Wick, the most bad ass hitman who ever lived, and the reason Alfie’s father (played by Michael Nyqvist) is the head of the Russian mob. And at that point, it’s on.

John Wick is a film that takes a simple set up and makes sure it’s dripping with style from the way characters are introduced to the music to the camerawork to even the language subtitles. Sure there lots of gun fights in this movie, but it’s the WAY these scenes are shot that make the movie so memorable. Rather than the use of quick cuts that prevent you from seeing what the main action star is doing (to cover up for the fact he or she CAN’T do these scenes or have a stunt double), John Wick puts Keanu Reeves in the center of the screen and relishes as he dispatches goon after goon with surgical precision. And by precision, I mean John shoots every body in the head. None of this arm shot and the goon is out of the picture; no, John makes sure his enemies are out for the count for good. It’s fast, it’s visceral, and it looks magical on screen.

To take us from one bad ass fight to the next we have Keanu Reeves giving a strong performance that is both believable and sympathetic. Action stars lose interest when you don’t see them get hurt too badly (see recent Bruce Willis and Liam Neeson movies), but you see Keanu convey the physical pain he endures at the hands of his enemies and believe he is genuine danger, despite the fact we would have no movie if he was gone.

Meanwhile, Alfie Allen is making a career out of playing characters that you just want to punch in the face. He looks weaselly and slimy that you can’t help but love it when people mess with him. And the fact he killed a puppy in the beginning of the movie? Every dog lover I know will want to see this guy and his friends get annihilated by Keanu Reeves. And Michael Nyqvist plays the role of a Russian mob boss who realizes at the beginning of the movie just how screwed he is. Nyqvist KNOWS Wick is a bad ass, he fears him totally, and tries to protect his son even against his own desire and knowledge that his son is already dead.

Supporting Keanu are a cavalcade of top-tier character actors from Ian McShane, John Lequizamo, Willem Dafoe, Adrianne Palicki, and Lance Reddick each playing anywhere from 5-10 minutes of screen time, but they use every second they’re on screen for all its worth. Their roles in any other action movie would have gone to some no-name actor or actress that would be quickly forgotten. But in John Wick? You get a believable performance out of each of them that not only sells you the movie but the strange world it seems to inhabit.

See a cool aspect of the movie is that John Wick is not only a legend in the world of assassins, but the hitman world has its own culture in this movie. They check into a special hotel where they rest while they conduct their business, utilize a gold-coin currency to transact every matter they engage in with each other, employ special cleaners to mop up evidence, and enforce a strong code of ethics while they’re at it. All of which is conveyed on screen with very little dialogue or exposition. No need to “explain” to the audience, the filmmakers think the audience is smart enough to draw their own conclusions as to how this world works.

John Wick is an enjoyable action romp from beginning to end that mixes clever world building and well-shot gun fights to make a stylish impression that will elevate it atop the usual action movies we see week after week. If you love dogs, here’s a revenge-fueled action movie just for you. If you want to see something fun, it’s the movie for you. Go check it out.