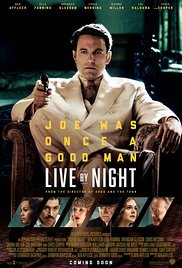 Oh Ben. Benny. Ben the man….what the hell happened? You were on a streak! A string of solid directorial works from Gone Baby Gone to The Town to Argo earning you your second Academy Award then getting to be the only good thing in Batman v. Superman. Alright, maybe The Accountant was a bit clunky, but that wasn’t your fault. For Live by Night though? Yeah dude, I can’t defend this to anybody aside from “well, it’s not THAT bad.”

So Ben plays Joe Coughlin, a Boston bandit and WWI veteran who ends up getting conscripted into a gang war by the Irish Mob. Oh but he’s also banging the Mob boss’ girlfriend (Sienna Miller) in a romantic liaison that threatens to destroy them both. Pretty straightforward set up, right? Well, the girlfriend gets killed by the mob boss, Albert White (Robert Gleneister) and Affleck’s character is sent to prison for a couple of years for a botched heist. When he gets out, he turns to the Irish Mob’s rival, the Italian Mob, and offers his services to take revenge on the Irish for killing his girlfriend and sending his dumb ass to prison.

So the Italian Mob sends him to Tampa to choke Albert White’s rum business in the middle of Prohibition era Florida. Of course that’s not the only threat he has to deal with…no he has to forge an alliance with the Cuban dealers led by Zoe Saldana as well as the Tampa police led by Chris Cooper. Oh, and because Joe’s a Catholic who forms a relationship with the Afro-Cuban, he ends up incurring the wrath of the local KKK. Oh but Joe also wants to legitimize his business by starting a casino, however that’s put into jeopardy by the police chief’s daughter (Elle Fanning) becoming a Christian Fundamentalist who encourages people to stay away from vices. And…shit why was he in Tampa for again?

As you can tell from my two-paragraph plot synopsis, this movie’s a big convoluted mess. What I appreciated about all of Affleck’s screenplays is that they were intriguing characters in tight, focused narratives. Here, in a script written entirely by Batman, he becomes obsessed with capturing every tiny detail that made the book this was based off a major scene in the film, so you barely have any time to flesh any of these characters all played by highly trained and talented actors. Granted, they all try their damndest to inject life into these paper thin cut outs of mob caricatures but it all feels pretty freaking pointless when the story itself meanders about with four or five subplots that all have pretty lame conclusions. The only character who gets any development, if by virtue of seeing him for such a large part of the film, is Ben Affleck’s character and his protagonist is where so many of this film’s problems begin.

Alright, so crime dramas are a hard sell to people because you have to justify why these people would do such detestable acts. Now you can paint them in a tragic light such as The Godfather, you can demonstrate how miserable they are a la Goodfellas, or you can show as true monsters that were simply waiting for an excuse to cut loose (see Breaking Bad). It’s alright if you make your protagonist sympathetic, but if you try to give them a “heart of gold” you end turning them into Dominic Toretto in Fast & Furious or Han Solo. There’s nothing wrong with the latter choice, it’s just not conducive to a gritty crime drama filled with nasty people doing nasty things. So why the hell is Ben Affleck coming across as the nicest gangster in the entire world?

I mean the dude likes Black people when no one else would bother looking at them, he builds shelters for battered women, he annihilates the KKK for terrorizing his community, and he refuses to kill innocent civilians. Give him a brown coat and have this movie take places centuries into the future and he’s basically Mal Reynolds from Firefly. Like I said, there’s nothing inherently wrong with this kind of character, but the framing has to be appropriate in say, an action-adventure setting. Trying to insert such a character in a fiction taking place during the Prohibition Era not only feels unrealistic, it just looks silly.

Now bear in mind, Affleck isn’t awful in this movie but he does seem bored to be on screen. I’ve seen this guy insert a ton of pathos into his characters that he directs, so to see him sleep walk through his own production just felt wrong to me on so many levels. He rarely raises his voice in the two hour and five minute runtime, while talking in a deadpan tone that just felt off putting to me. He lacked any emotion in scenes that truly required him to get angry or sad, and it became especially jarring when the film claimed that women fell deeply in love with him.

But as previously mentioned, barely any other actor gets enough time to shine in order to develop their characters to demonstrate such a connection. Zoe Saldana plays his primary love interest and the only thing I knew about her was that she was Cuban because she kept repeating her heritage in every scene she appeared in. I have no idea what her ambitions were or what did she see in Ben Affleck, hell their sex scene had all the passion of watching a six year old mash two action figures together by the mouth as he or she makes kissing noises.

At least she gets more screentime than some truly esteemed thespians like Elle Fanning, Brendan Gleeson, Chris Cooper, Miguel (the singer), and Clark Gregg. But unlike say, John Wick which took top tier level actors and gave them bit roles for them to drop a cool line while advancing the narrative; these actors in Live by Night just feel like they were asked to photobomb the set so they can add another name to a long list of great actors. It’s not as egregious as say the execrable Rules Don’t Apply, but it did become very apparent to me that these guys had no clue what they were doing there when all was said and done.

Now as bored as I was, there were a few car chases and gun fights that piqued my interest for however briefly. But they are in short supply compared to Affleck’s previous crime drama, The Town. Still, technically-wise the camera shots are excellent and the framing is very well done so maybe Affleck was taking a shit script he knew wasn’t worth it to just try flexing his directorial muscles in between superhero stints. But the film truly feels like it came from a man who made it without an ounce of interest.

That’s majorly disappointing coming from Affleck who completed his comeback stage and is now a permanent fixture in the Hollywood scene once more. Still, I expected better from. I don’t hate this film, but I can barely find anything to recommend in here aside from the technical aspects. Still, if you saw this while you were bored at home on a Sunday, you might get a kick out of it. So, with that, I’ll award this a low…