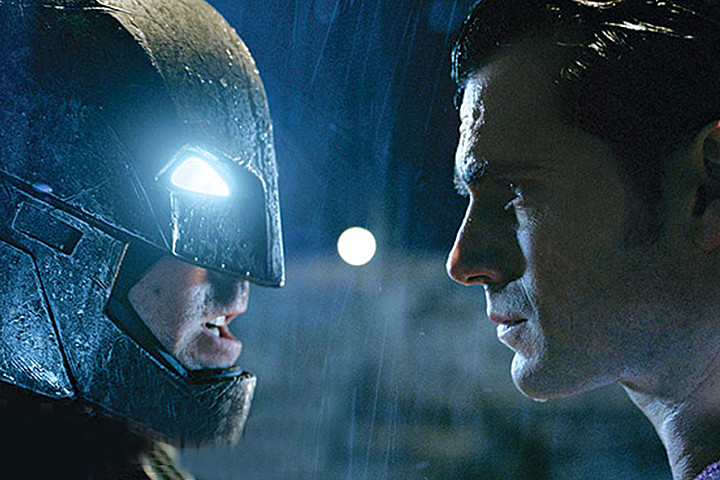 I think I need something strong after getting knocked the hell out by this movie.

I seriously don’t know how to give you a plot synopsis, because Zack Snyder doesn’t know what the fuck a “plot” is. Because honestly it went everywhere and nowhere at the same time. Bruce Wayne/Batman (Ben Affleck) is pissed off at Superman for being the cause of so much wanton destruction back in Man of Steel (you and me both, brother), so he resolves to steal a rock that is poisonous to Superman to destroy him. Superman is dealing with the ramifications of being a clumsy idiot god who some people distrust and others worship as their lord and savior. And then you have Lex Luthor (Jesse Eisenberg) who hates super powered humans because…he thinks all powerful cannot be all good and all good cannot be all powerful? Honestly, I’m not 100% sure on his reasoning but I believe it has something to do with faux-philosophy. Also, Wonder Woman is in this movie…that’s about as much I can manage without dropping into spoilers.

But to hell with giving you spoilers, because even then I still couldn’t make heads or tails of this plot. Scenes are poorly stitched together and do not flow into each other because you have the movie jump from Batman to Superman to Lois Lane to Lex Luthor to Batman to Wonder Woman out of nowhere and back to Superman and it goes on like this for two and a half hours. There is no story. Anyone claiming that “this movie is awesome”does not give a fuck about story. And you know what? That’s fine, it truly is. But it also tells me that this person is easily impressed by a bunch of glowy lights on a screen and that’s it. They like the fight scenes because “they’re so cool” and “they’re so badass.” And to this film’s credit, the fight scenes are indeed badass and cool.

Guess what? That’s not enough for me. I need well developed characters, I need a coherent story, and I need a reason to care. Batman v. Superman: Dawn of Justice almost fails on all three counts.

Let’s tackle story first since I’ve already dedicated two paragraphs attempting to decipher the plot of this movie. The reason this story sucks is because it truly feels like a bunch of random scenes were tossed up in the air by Zack Snyder, then he arranged the film in whatever order they landed. You go from moody credit introduction to apocalyptic horror to hostage rescue to pensive Senate hearing to dark firefight to detective scene to romantic lead-in and then to a goofy villain. That’s the first 20 minutes, and as you can see we just five or six tonal shift for the first tenth of this freaking movie.

It never gets better from there. Your pacing gets thrown around a merry-go-around gone haywire and you’re drunk on a particularly hyper active horse. And every now and again, you get your main villain monologue with a freshman’s understanding of basic philosophy he’s using to impress the girl with glasses he saw on the first day of class. These moments are downright chaotic because you’re having trouble figuring out what the hell you’re watching: a comic book movie? An exploration into the dark pretexts of men’s souls? A choice between destiny or free will? Or a trip into the nihilism of heroism?

So the story is a freaking mess, but what about the characters? Okay, I’m going to pause from the negativity to highlight something great about this movie: Ben Affleck. Everyone talked shit about him when he first got cast; and to be perfectly frank, he single-handedly saved this movie from Armageddon. His Batman is intense, hrutal, and tactical while his Bruce Wayne is the billionaire playboy. When he’s not under the cowl, he’s flirting with anyone who has a skirt and drinking the bar dry. When he’s under the cowl, he’s sending people to the trauma center. One particular scene towards the end is the live action Batman I have always wanted to see in live action…

…but some of his actions are so freaking WRONG. Let’s put it this way, if you like your Batman who doesn’t kill and abhors guns, well…this ain’t that Batman. Batman racks up a pretty sizable body count by film’s end and it just felt so off. Batman is NOT The Punisher. I was just praising Daredevil Season 2 last week for featuring a Punisher who wasn’t Batman with guns, and here I am criticizing a Batman who employs toys the Punisher would wish upon a star for.

But hey, at least Bruce Wayne has a consistent personality, unlike the emotional vacuum that was Henry Cavil as Superman. Yes ladies, I know he’s pretty. He still can’t fucking act. Especially in scenes that require him to act off other thespians, his lack of talent is much more noticeable. He’s like a block of marble when trying to look “tender” when he’s with Lois Lane, and Ben Affleck might as well be talking to a freaking brick when he’s talking smack to him. Superman is also not in this movie all that much even though he’s certainly required for the big climactic finish that makes it doubly coincidental this movie is coming out on Good Friday…as if the Christ imagery from Man of Steel wasn’t subtle enough for you. What’s more, it becomes painfully obvious that Zack Snyder truly does not know what to do with Superman and actively hates the character, choosing to focus on developing Batman throughout the film instead.

Jesse Eisenberg meanwhile takes home the MHP award for Most Horrible Player. He’s freaking atrocious in this movie as Lex Luthor. Snyder opted for a non-threatening, nasily sounding, spastic mad scientist for the main antagonist and it. Does. Not. Work. It looks silly, it feels silly, it IS silly. I know Eisenberg wanted something different from the serious CEO of the 90s or real estate mogul of the Christopher Reeve films, but this version of Lex Luthor is the weakest and lamest version of the character I’ve ever seen. It’s the antithesis to Heath Ledger’s Joker of a character I never knew I needed; Eisenberg gave me something that I didn’t reasonably think would be a good idea. But nonetheless, he chose to channel some of the mannerisms of Ledger’s Joker to make whatever the hell he was going for, but it fails miserably. And I haven’t even mentioned his master plan not making a lick of goddamn sense (and his reason behind the plan being “vague” at best). He’s so over the top in a movie featuring such dour dialogue that his presence truly feels incongruous to whatever the hell this movie was supposed to be.

Oh yeah, and Wonder Woman shows up at the very end for like five minutes. If you saw the trailer, you already saw her input for the entire freaking movie. To the filmmakers’ credit, she looks and acts fine. Seriously, Gal Godot acted quite competently and did a fine job with she had. That’s not a back handed compliment, because she’s truly not in the movie all that much and is barely given anything to do. Aside from being the catalyst for an awkward segue-way in which the film stops dead to give you brief glimpses of The Flash, Cyborg, and Aquaman out of nowhere.

So every character except one sucks, story sucks, and writing sucks…so is there a reason to give a shit? Aside from the fact that this is being marketed as the “cornerstone” of the DC Cinematic Universe, it’s really not that impressive. You may notice I haven’t mentioned the fight between Batman and Superman once in this entire review, and may think that is the reason to a give a crap. Sadly, I don’t care about the title fight either. That’s because it lasts a grand total of 7 minutes and it ends in the clunkiest way imaginable. Is there a victor? Yes, but the victor stops dead for a reason that is both a spoiler and something phenomenally stupid. If you’ve been browsing reviews elsewhere, I can confirm that yes, the reason for why they stop the fight is breathtakingly dumb.

But we all KNEW the fight wasn’t going to mean shit because the trailer gave away the three heroes posing to fight a cave troll from Lord of the Rings anyways. Yes comic book nerds, I know he’s freaking Doomsday. A lame ass villain that was specifically created to kill Superman in the comic storyline Death of Superman. And with Doomsday’s introduction, Warner Brothers has cocked up any significance that storyline (what little it had to offer) could have paid off in future installments. But Doomsday’s introduction also signifies for the special effects to be jacked up into overdrive that gives the wasteland creation in Man of Steel a run for it’s money. For all the criticism sent to Zack Snyder for that movie’s ending, he’s opted to embrace it wholeheartedly and given us a truly ugly and miserable climax that’s hard to tell what the hell is happening. That and Doomsday channels Super Saiyans from DragonBall Z in powering up, so you know exactly the mental age Snyder seems to be operating on.

Good action movies, like Mad Max: Fury Road and John Wick, give you ample opportunity to see every blow that’s thrown by villain and hero. Batman v. Superman does not agree, and mixes shaky cam with lens flare with badly edited computer effects to craft a final battle that looks worse than some Playstation 3 games I’ve completed.

This movie was a pubic hair away from being tossed into Some Ol’ Bullshit. I did not like this film at all. It’s relentlessly dour with maybe two or three laughs peppered in the whole debacle. Before I hear any responses claiming, “oh that’s not what DC is going for, compared to silliness that is Marvel,” first off YES THEY FUCKING ARE. You really think Warner Brothers doesn’t want Avengers money? How naive can you be? They wanted to create a popcorn money making machine and they entrusted it to an angsty thirteen year old who furiously masturbates to his comic collection. And sure, there are some people who liked that shit, but I’m not one of those fuckers.

This movie was a tonal, un-fun clusterfuck that I will not want to see again. Call me a crab, call me a bore, call me an old man. I don’t give a shit. I like good storytelling, I like unique visions and this movie is not either of those things. It’s an incredibly nihilistic look at superheroes that thinks it has something important to say, but is usually too busy with making everything look cool. For a few decent fight sequences and Ben Affleck’s Batman, this is a low…

EDIT 6/5/2017: Due to how good Wonder Woman was, I have no choice but to go back and look at this film to be honest with myself. Because this movie is…