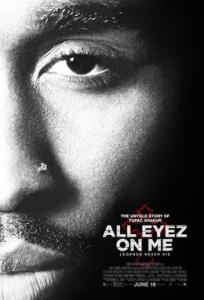 It was the best script written…in ’94

Trend chasing is a popular pastime of the film industry. One good idea leads to dozens upon dozens of imitators, though I am actually glad there is interest in now making biopics of the rise of 90s gangsta rap artists and their respective tragic falls. We had Notorious highlight the life of Biggie Smalls in a competent, but not necessarily exciting way; but then we had the commercial and critical success of Straight Outta Compton detailing the lives of Ice Cube, Dr. Dre, and Eazy-E (nobody cared about the other two). The latter has now sparked interest in more biopics about this era of music with a look at the life of one of the biggest names in hip-hop: Tupac Shakur. I honestly didn’t know much about his life going in, so I was gearing up for something illuminating…those ellipsis are a good sign that the film didn’t stand up to the task.

Our film begins with Tupac (Demetrius Shipp Jr., who is an honest-to-God doppelganger of Shakur) giving an interview in Clinton Correctional Facility in 1995 for his rape conviction as he waits for an appeal. As the interview goes on, we cut to the moments in Tupac’s life that he describes such as his parents’ (Danai Guerra & Jamie Hector) leadership in the Black Panther Party, his friendship with Jada Pinkett (Kat Graham) in the Baltimore School of the Arts, and the beginning of his rap career with Digital Underground (featuring Money-B as himself). All of this leads to his booming career in music and film that puts him on a collision course with unscrupulous friends in New York, Biggie Smalls (Jamal Woolard reprising his role The Notorious B.I.G. from Notorious), and Suge Knight (Dominic L. Santana). When Tupac is released from prison, the interview narrative is dropped entirely and we shift to a straightforward biopic as he get to know the rapper’s time with Deathrow Records and his untimely demise in Las Vegas.

As I stated in my Straight Outta Compton review, biopics are by their nature very difficult to make from a filmmaking perspective because they just don’t have a strong narrative flow that exist in other films. Now films like Ray and Walk the Line rely on very strong performances from their leads to captivate their audience any way they can, while Straight Outta Compton began with a strong social focus by spotlighting the rappers’ rough early life and their constant issues with police leading to an amazing performance of “Fuck the Police.” Where the Straight Outta Compton faltered was in the latter half of the film when it became a series of true events that happened to each member of the band, as there wasn’t much to hold the film together aside from the great leads. And while Demetrius Shipp is a solid actor who seems to have been blessed as a clone of the late rapper, he alone couldn’t save this film from a plethora of narrative problems.

Let’s talk about “artistic license” when it comes to biopics. Many biopics tend to be dry affairs where the order of events are presented as “so this happened, and then this happened, and then this happened.” This is not a great way to present a story as it becomes incredibly difficult to maintain a narrative flow that feels natural. Great biopics like Amadeus, Malcolm X, or The Wolf of Wall Street inject a ton of style and filmmaking twists that keep the audience engaged in a way they wouldn’t with a normal biography. All Eyez on Me instead uses Tupac’s Clinton Correctional Interview as a decent narrative device to tell the life of the late rapper up to that point, but the film seriously feels schizophrenic as it jumps haphazardly across defining moments in Shakur’s life. As stated above, you go from his mother’s imprisonment to being raised by his single mother to dealing with the fact his mother abused drugs to his relationship with Jada Pinkett to his audition with Digital Underground all in the time frame of about 20 minutes. That’s a ton of defining moments to pick on, but you don’t really get to know Tupac or his relationships with these various people that defined his early life.

Now I “get” why highlighting such moments are important to a biopic, but they also need to have actually HAPPENED or serve some purpose to telling a story for a film. So far, Jada Pinkett has pretty much denied any of the scenes featuring her in the film either happened at all or were straight up contradictory (she claimed Tupac and her never argued backstage, nor did she attend any of his concerts by his requests, and he had never read to her a poem he wrote about her). Now, it’s very likely the filmmakers used her as a figure of different days for the rapper when he was more dedicated to his parents’ cause and less interested in petty rap rivalries; but it just felt the film was using Jada Pinkett for this role because she was a famous person who knew Tupac.

The weakest part of the film are the events leading up to Tupac’s trial and imprisonment. For those who don’t know, a woman accused Shakur and his entourage of raping her in a hotel room back in 1994, for which he was convicted and was still awaiting an appeal when he died. The details of the actual event appear to be sketchy twenty years ago, but the film depicts these events in as just as a confused matter. The movie sloppily introduces the people who were involved in the entourage as well as their relationship with Tupac and Biggie Smalls. This also leads to a shooting that took place on the eve of the final day of Shakur’s trial that pins the blame of the attack on a third party that was tangentially related to Tupac and Biggie. Instead of trying to stake a claim as who was involved with what, the film presents the facts as a big ol’ mess that’s undecipherable as to who was the true culprit of the shooting.

You may think that the film is setting up the source of Tupac’s real-life rivalry with Biggie from his perspective, but the movie pretty much glosses over a lot of need-to-know facts so it can get to the next scene. Honestly, it would have intriguing to dive into Shakur’s paranoia of who actually shot him, but it’s only given lip service before moving on to the second half of our film where we focus on the rapper’s relationship with the infamous Suge Knight. If you have never heard of Knight, think Marvel’s Kingpin…no seriously, that’s how many rappers and the film itself view him as. Mostly because he intimidated every artist, producer, or any person he didn’t like with violence. While some of the actions he took in real life are shrouded in mystery, it’s only added to his legend and made him an attractive point for the film to focus on.

The only problem is that this portion of the film feels like a 180 degree turn of how it was depicting Shakur as well. Up until signing on with Suge Knight’s label, the film was explaining that Tupac was a wise artist who wanted to reach out to many members of the Black community to address violence in the inner cities despite his many contradictions with some of his music. But once Shakur and Knight shake hands, Tupac is depicted as someone who happily went with Knight’s violent tactics while also demanding respect to his company in Deathrow Records. But there was no development between the budding revolutionary and the vindictive businessman determined to settle scores with other rappers. I would have loved to see this transformation actually take place, because it’s truly tragic tale; but the film misses the opportunity completely by presenting these facts as flatly as possible.

And that’s why I can’t like this film it all, it failed to engage me in the life of Tupac Shakur in any way. On paper, his larger-than-life persona makes for a fascinating read that has only fostered all kinds of legends and urban myths. But this movie presents a life in such a matter-of-fact life, that it strips the rapper of any sort of apotheosis. To that, you might think it was the intent of the filmmakers to de-romanticize the life Tupac, but the film doesn’t stop once to drool over all of his accomplishments. Hell, even the end title cards stopped just short of worshiping the man for his many feats. This kind of confused filmmaking just makes me resent the whole production unfortunately.

Mercifully, the cast really do save the film from oblivion. Of note, Demetrius Shipp Jr. isn’t just a decent lookalike, he’s also a very solid thespian. His every reaction and internal strife is communicated remarkably well for a poorly mishandled direction, and he effectively carries the film on his back for the entire run time. Even Dominic L. Santana finds a decent median point between businessman and supervillain in portraying Suge Knight, which might honestly be closer to the truth about the man and one that he apparently appreciated. Danai Guerra also did a wonderful job as the complex mother of Tupac, to the point I wish she was in the movie a whole lot more than she was.

And while I hated the story structure, the script itself is filled with decent dialogue. Really, the direction is what really lets the film down. Benny Boom was at the helm of this production with his only other major project being Next Day Air and…God I hated that film. Like REALLY hated that movie. While All Eyez on Me is a more competent film, it’s also far more boring. The guy’s a music video director first and foremost and I hope he can expand his creativity to make something truly memorable, because this film will not be his mark on the industry.

Overall, I’m left disappointed, which you’d think I’d be used to by now. I’m not angry, just really sad that such great potential was squandered for a by-the-numbers biopic. Maybe fans of Tupac will enjoy this far more, but I can only really recommend this movie for everyone as a…

2 thoughts on “All Eyez on Me Review”