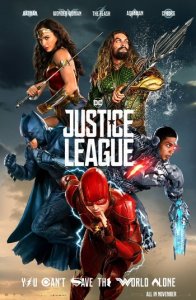 The DC Comics Cinematic Universe has been one of the relentlessly curious and fascinating implosions in modern memory. Hellbent on capturing the magic (and profit) of their rival company, Marvel, DC has embarked on one of the most lucratively self-defeating pursuits of catch up in film industry history. The result? The divisive Man of Steel introducing a new Superman that demonstrated a complex version of the character but falling completely short on the story end. The abysmally bad Batman v. Superman: Dawn of Justice, giving an even worse version of Superman in a confused, cynical plot that was also somehow supposed to be a crowd pleaser. The somehow even worse Suicide Squad that gave the world the worst possible incarnation of the Joker as the film fruitlessly imitated another Marvel property. And then we arrived at this year’s surprisingly great Wonder Woman, giving our first glimpse into the potential for amazing use of these comic characters. So our fifth installment, we have the biggest collection of heroes since The Avengers…how did they do? Well good news is that it’s remotely watchable…DC truly set the bar as low as possible before today.

So the plot of this film concerns six individuals who possess a wide array of special abilities including a strong woman, a rich billionaire, a man from another world, and another person who regards himself as a ticking time bomb. They have come together as an alien has come to their world with the intent of conquering it in the name of their unseen master. To complete the conquest, the alien seeks the power of a magical box that will allow him to fulfill his mission and so the six heroes band together in order to stop the alien onslaught and save the people of Earth and…what? Oh you thought I was describing the plot of The Avengers? How awkward, because that’s LITERALLY the plot synopsis for Justice League.

Snide against the plot aside (come on, I wasn’t going to pass that joke up), it’s at least a thousand times more coherent than anything that was going on in either Batman v. Superman or Suicide Squad. There’s a beginning, middle and end for once in a Zack Snyder film (even though he wasn’t able to complete post-production due to a family tragedy requiring Joss Whedon to serve as director for reshoots instead). What’s more I could tell what the hell was going on most of the time…emphasis on most because this film does feel rushed at several points. It’s feels as if there are whole chunks of scenes missing from the final product, and that’s because that’s exactly what happened. Whedon was likely hired to cut and reshoot certain sequences to allow the film to make more sense and feel more streamlined. And while I think he succeeded for the most part, I can’t help but feel we’re missing a ton of information, and that’s mostly where the new characters for this universe come in.

Now, a positive in this film’s favor is that the cast is pretty solid all around and each of the characters get enough development to be charming and sympathetic. I really enjoyed Aquaman (Jason Momoa) as a laid-back surfer who roams the seas helping people out when he can, and also getting the best lines in the whole picture (even if they are permutation of “My man,” “Alright,” and the immortal “Yeah!”). Barry Allen, aka The Flash (Ezra Miller) grated on me at first, but I liked the fact the filmmakers have envisioned him as a borderline autistic kid now being drafted into a war when he has zero clue on how to fight. Further Miller does a decent job of injecting humanity and wonder into his character, that I can easily see him as a crowd favorite. I’ll even pay a compliment to Ray Fisher as Cyborg, who is possibly the only character who undergoes an actual character arc throughout the entire film. It’s a welcome change, but I will confess that the development is indeed rushed of depicting him as accepting of his abilities by film’s end.

Actually, a lot of these new characters get major cuts to their development. Aquaman pops into…what I think was supposed to be Atlantis for a brief moment and we’re introduced to his future love interest (Amber Heard flat as ever) in Momoa’s upcoming solo film. But the set up for this scene is incredibly rushed, that it took me a few minutes to realize what I had just witnessed; and this unfortunatley happens a ton in the first half of this film. Now granted, I know DC is trying like hell to make the lightning in a bottle approach that led to the box office and critical success that was The Avengers (especially by hiring the guy who directed it), but the studio stumbled severely in trying to replicate that film’s structure when that movie was preceded by five others over the course of four years establishing the identity of all eight main characters. Now granted, Guardians of the Galaxy succeeded fine by introducing you to five characters coming together as a team within in a single film; but James Gunn was able to give you just enough characterization for each protagonist and didn’t faff about with history too much. Unfortunately, nobody at DC got that memo, which lead to strange omissions like the deal with Atlantis, Cyborg’s  transformation from man to machine, Barry Allen’s own motivation in helping his father, and even the loss of Superman in Dawn of Justice.

My biggest gripe against the character of Superman in these films is that the person everyone speaks of him as is NOT the character that was previously shown to us in two other films. Superman was shown to be an isolationist who doesn’t really understand on how to deal with society, especially when the people vilify him as a danger to the world while others worship him as a god. We barely get to know the man before he was unceremoniously killed off by a Tolkein cave troll in Dawn of Justice (which made for a great-to-Zack-Synder shot of the Pieta), and instead we’re left with other characters filling in the gaps of what Superman supposedly meant to the world. But they all revere him as the greatest hope the world had ever known, even Batman (Ben Affleck, seriously eyeing the exit in every scene that he’s in) laments what a great man Superman was…after he spent 90% of his last movie trying to MURDER the man. Oh but he found out their moms had the same first name, so that instantly made Superman a godsend in Batman’s eyes…God this scene is hysterical.

So when Superman inevitably returns, NO. Don’t you dare. Don’t you dare tell me that Superman returns is a spoiler because he’s in the friggin’ poster! I specifically put that shot of him in the title to make it abundantly clear that he returns in this film. I will not go into specifics, so I’ll leave that as a surprise for you as well as the effect it has on the plot. Okay? Okay then…

So when Superman inevitably returns, I felt…nothing. The resurrection of a pop culture icon lands with the effect of checking off a list of things to do, and the film quickly forgets all about it to focus on the original plot with the invaders. I had a suspicion this was going to happen anyways as the death of Superman in Dawn of Justice left me such apathy that it contributed to my overall resentment of the film. But it’s really jarring to see the “Resurrection of Superman” appear as a mere footnote to a film about repelling an alien invasion.

Speaking of which, the alien invasion comes across as incredibly dumb in no small part to the main villain, Steppenwolf (Ciarán Hinds). No, not the musical band, I’m talking about a painfully bad looking CGI puppet who talks in a deep voice but has piss all character. So he’s at least on par with every Marvel villain ever as opposed to being a phenomenally bad performance courtesy of Jesse Eisenberg (hoo boy, stick the end credits if you want a reminder that he’s your Lex Luthor). But the design and the render of Steppenwolf looks shockingly bad for a $300 million dollar budget (not including marketing costs) and I can’t help but feel just how easier it would have been to just film a normal dude in an extravagant outfit. I mean Thor: Ragnarok had both ridiculous CGI-characters and bright costume design, but both looked great in context with their respective scenes.

At the very least, much like Thor 3, Justice League has some decent action sequences in which I could tell what the hell was going on. And hey, I even had some characters that I genuinely liked. Even though I really needed some more Wonder Woman (Gal Gadot) because she genuinely comes across as the most charismatic of the trinity of leaders. The film tries to appease you in the first five minutes by throwing in a totally irrelevant scene of Wonder Woman kicking ass, but I forgave it because 1) it’s Wonder Woman kicking ass and it looked cool and 2) I really liked her character from her previous solo film that still holds the distinction of best DC Cinematic Unverse entry. While the conclusion feels a bit like a lesser version of the Battle of New York from the first Avengers, I was still able to enjoy it for what it was…just not as much as I would have preferred.

By film’s end, there were a ton of individual scenes that I liked containing some solid banter or some cool visuals that I can easily appreciate. But taken as a whole, the film feels inconsistent to stand together as a complete experience. The rushed character development, the weak depictions of Batman and Superman, and the lame ass villain hurt what was otherwise a decent trip to the theater. I still greatly enjoyed the character interactions and even thought this is DC’s best cinematography so far for great action set pieces, so it’s worth checking out in theaters at the very least. But for the marks against it, I’ll give this a low…