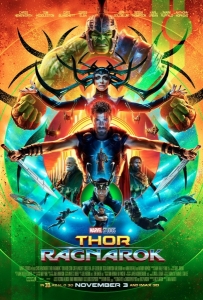 The Thor films have been the Black Sheep of the Marvel Cinematic Universe, generally regarded by some (particularly me) as the weakest in the entire series. Which is a shame, because Thor is a fun comic character: a fish out of water dealing with larger than life creatures from Norse mythology. And Marvel had the good sense to hire Chris Hemsworth for the role, who has done his best to inject as much personality into the self-serious character. However, after two solo films taking themselves way too damn seriously and ironically coming across as a bigger joke, Marvel got the bright idea to turn Thor over to a very talented comedic director, Taika Waititi. Never heard of him? He’s flown under the radar with one of my favorite comedies of 2015, What We Do in the Shadows, and he released last year’s Hunt for the Wilderpeople which was pretty decent if you ask me. Additionally, he also directed a few episodes of Flight of the Conchords. Low budget fare all, so how does he manage with a bigger budget?

Well first of all, Waititi decides the best thing to do with Thor (Chris Hemsworth) is to pit him and his conniving brother, Loki (Tom Hiddleston), against their sister, Hela (Cate Blanchett rocking the Rita Repulsa look). Hela is the Goddess of Death and has returned to Thor’s home world of Asgard to take it over as well as every planet in existence to satisfy her ceaseless blood lust. Thor tries to use his trusty hammer to take care of the problem as he always has…until Hela smashes it into pieces within two minutes of meeting our hero. While Thor and Loki try to flee her wrath, they end up getting stranded on the planet Sakaar, ruled by the flamboyantly hedonistic Grandmaster (Jeff Goddamn Goldblum). Lacking his mighty hammer, Thor gets captured by a drunken bounty hunter who also happens to be a powerful Asgardian Valkyrie (Tessa Thompson); and so, the God of Thunder is forced to compete in the Grandmaster’s gladiatorial arena to earn his freedom. But his first and only competitor happens to be his long lost friend, Bruce Banner (Mark Ruffalo), AKA The Incredible Hulk.

What follows in a 2 plus hour hilarious road trip across the galaxy, easily cementing the film as the best of the Thor trilogy. Now as previously mentioned, this is not at all a difficult task, especially given just how boring and uninspired Thor: The Dark World was; but it is important to note that Ragnarok does indeed stand on its own two feet as a solid film thanks in no small part to its director, Waititi. The New Zealand director expressed his own voice with solid and consistently funny banter between characters, gorgeous and colorful visual flair, and a great sense of momentum as each scene builds upon the next like a proper story should. Furthermore, the situations Waititi comes up for our heroes to face allow him to create ideal comedy best suited for the circumstances at hand. A rarity in this industry to be honest.

Furthermore, Waititi gives his actors plenty of room to breathe so they can feel comfortable enough to take more risks. Most notably, this is easily Chris Hemsworth’s finest contribution out of the five times he’s appeared in the Marvel films thanks to small modifications he made to the Thor character. No longer do we have the Shakespearean cadence he was first introduced with, but he’s far more aloof as the hot head Thor really is and adopts a far more casual tone that lends itself to great moments with other characters and even situational comedy. Most surprising of all for a part three of a franchise, he actually goes through a genuine arc, ending the film as a far different person then we saw in the beginning of the movie. And yes, it helps that he has the body that was kissed by God himself.

Helping him along is a solid supporting cast that also turn in truly special moments. Now Jeff Goldblum has always been a national treasure, but he’s allowed to chew as much scenery as possible in this movie and it pays off in dividends. Goldblum enters the frame as a cross between Caligula and Liberace but talks in a way that entirely belongs to the actor and him alone. Every time he showed up was a true pleasure to behold, especially since he’s not in the film all that much. Similarly, Hiddleston returns to the role that made him a household name and he continues to find new ways to be as much as backstabbing showboat as possible.

Another great addition to the cast was Tessa Thompson as Valkyrie. Introducing herself as a drunken scrap collector, she commands the screen with her amazing charisma and sarcastic attitude that made each scene with her as much fun as possible. Out of everyone here, I do hope Marvel gives her a unique spin off (and doesn’t tease us like they did with Black Widow for almost a decade) because Thompson honestly feels like she can carry a movie all on her own.

Now someone who can’t be in a movie all on his own due to…complicated legal matter I don’t have time to get into, is the Ruffalo’s Hulk/Bruce Banner. Once again, Ruffalo provides the motion capture and voice to Hulk, who unlike previous appearances in the Marvel films, is actually able to converse with other characters for extended periods of time. This is due to a surprising character turn involving the Hulk, but Ruffalo still gets a chance to show his pretty little face as Banner as well and is consequently able to riff well off of Hemsworth. We’ve normally seen Ruffalo interact with Robert Downey Jr’s Stark and Scarlett Johansson’s Black Widow, so seeing his character hang out with Thor is a change of pace. Pleasingly, like many other things in this movie, the back and forth works well to give you a solid sense of camaraderie that is a staple of the Marvel films.

Now a weak point for Ragnarok unfortunately comes from the aspect I was most looking forward to: Cate Blanchett as the villainous Hela. Blanchett is amazing, no question, and she does as much as she can with what she’s given…the problem is that there’s not a whole lot to her character. It’s a definite step down in terms of writing especially in the wake of Spider-Man: Homecoming, but Waititi is still able to use the character to introduce a…surprising concept. See, Hela used to be Odin’s (Anthony Hopkins who basically gives a cameo in this movie) main weapon to put Asgard on top of the food chain before she was put away when her aspirations grew too great. However, Hela exposes that Odin was feeding a lie to his people who have lived in regal splendor for centuries despite the fact he waged a bloody colonial conquest and decided to stop when it was too much for him. It’s an interesting critique about the inherent nature that colonialism has been the foundation for many a great civilization despite its horrific nature…it just be nice if the film explored that concept a little more than a nod to it.

Oh yes, and while I’m on the complain train, Karl Urban has a tiny, TINY role as Henchman #241,512 with an arc that really doesn’t have the pay off the filmmakers were intending for. Finally Natalie Portman did not return for this installment and she gets written out of the story in the worst possible blink-and-you-miss-it line of dialogue ever. Still, tiny critiques out of a consistently funny comedy with beautiful imagery isn’t half bad, considering other big budget productions fall short of giving you anything of worth. I really do hope Waititi gets brought back for another Thor film, and if not for that than anything Marvel-related (let’s see if we can nail that Valkyrie flick I was banging on about). I’m giving this an enthusiastic…

One thought on “Thor: Ragnarok Review”