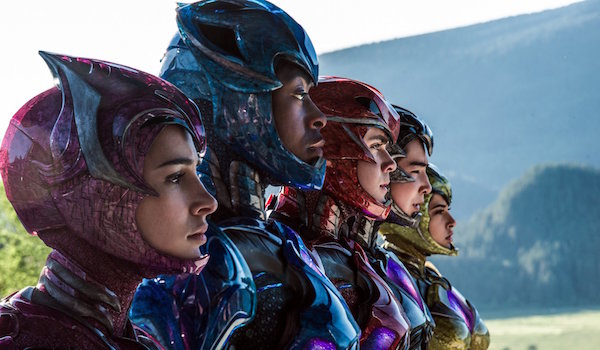 Nostalgia has been a tricksy mistress of a late. Resurrecting old properties from the 80s as blockbuster films can go in multiple ways. You can make something loud and obnoxious like the Transformers series, or an average effort that still pales in comparison to the source like Ghostbusters, or something that’s tonally mismatched like Teenage Mutant Ninja Turtles or G.I. Joe, or just make the worst film possibly imaginable like Jem. Well we’ve mined the 80s for all its worth so now it’s the 90s turn to dig up any odd corpse with the slightest hint of fan recognition and shove a gigawatt up its ass to bring it back to life on the big screen. For the first of these properties, we have Saban’s Mighty Morphin’ Power Rangers being reborn as a major motion picture, although (I did not know) is STILL ongoing. Yeah, the series is still going under a different name that still somehow retains the chronology of the past 24 years. But for this film adaptation we have a reboot of the very first series complete with villain.

We’ve got the mining/fisherman town of Angel Grove, where five weird teenagers arbitrarily uncover a set of five coins at a quarry that imbue them with super strength and near invulnerability (kind of). The teens return to the quarry and stumble upon a spaceship where Alpha-5 (Bill Hader) and Zordon (Bryan Muther-freaking Cranston) reside. Zordon was once the leader of the Power Rangers, peacekeepers in charge of protecting a crystal that gives life to an entire planet, until Rita Repulsa (Elizabeth Banks), one of his fellow Rangers, betrayed the team and got them all killed because….actually that motivation wasn’t particularly clear. I guess she wanted to dick. Anywho, Rita’s coming back with a brand new monster called Goldar that she’ll summon within 11 days so that she can claim the crystal for herself, and it’s up to the teens to team up and learn how to morph into the Power Rangers to stop Rita and save the world.

While a bit convoluted, the plot’s not too shabby. I mean it’s basically your standard Power Rangers episode from any odd version of the franchise. The only problem is that those episodes were 20 to 40 minutes in length, and this film is two freaking hours long. And just like any odd Power Rangers episode, the teens don’t become the superheroes until the last few minutes of the film. Knowing this going in will help you decide whether you want to shell out cash for a theater showing or waiting for this to come out on Netflix. Tiny spoiler of my review, I’m going to give this a tentative recommendation*…but keep in mind that endorsement comes with a big, wet, pulsating, cancerous asterisk that needs to be dissected first.

So if you’re wondering what you’re in for in the first 90 minutes of the film, think The Breakfast Club meets Karate Kid. The former’s comparison come into play with character introductions that feel comparably hallow to its inspirational material, however. You first get to meet Jason (Dacre Montgommery), the de facto leader of the team, first as he engages in a prank that involves jacking off a bull (no really, this is a thing that happens) and getting his dumb ass arrested and thus losing his chance of being a professional football player. Why did he engage in such a prank? The film never bothers to explain because it was too busy setting up a really awful looking one shot chase scene inside the car that the director thought was really clever, but just looks awful (incidentally, Collide pulled off a similarly bad stunt).

From here, our darling Jason winds up in detention where he meets Billy (RJ Cyler), a noticeably autistic young man who wound up on the school’s crap list thanks to an exploding lunchbox. The pair strike up a friendship of sorts when Jason defends Billy from a bully (no it’s Bulk or Skull, put your hand down) and Billy assists Jason in committing a felony. Nice kids all in all, when they meet the other three future teammates at a quarry who all happen to be there for very arbitrary reasons at the same time as Jason and Billy. The five end up blowing up a mountain (don’t ask) and end up coming across the power coins that turn them into superheroes.

Now, aside from being an obvious ripoff of the premise behind Chronicle, I’m going to pause for a second to explain why this setup doesn’t work. When this was all being played out on screen, I couldn’t help but think of the first act to Guardians of the Galaxy. With that film, which I’ll remind you features a human, a cyborg assassin, a talking raccoon, a walking tree, and autistic warrior, the team meets all together through a series of misadventures that were established in the opening minutes of the film. You briefly know of all five characters’ backstories through various means before they all find themselves in a similar predicament that leads the distrustful protagonists to want to work together. And despite how out there the premise and the characters were, everything worked well on screen.

Now here, you have even more believable characters of just angsty teenagers. Not a bad thing mind you, but considering how down-to-earth this film’s set up was, I couldn’t help but feel how contrived this meet up was. Maybe it was because you only get to know the characters of Jason and Billy the best at this point, and that thread continues until the very end of the film. Yeah, Trini (Becky G) and Zack (Ludi Lin) barely get any character development, while Kimberly (Naomi Scott) gets a late minute reveal as to why she’s so standoffish that seems so trivial compared to what she was building her secret up to be.

See, I know what the filmmakers were trying to do with this film in updating these characters; rather than give you “teenagers with attitude” you get teenagers with emotional baggage. The baggage oscillates between realistic (Billy’s autism) to relatable (Zack’s mother issues) to forced (Trini’s supposedly gay in a similarly vain attempt to court LGBT audiences in the most half-assed imaginable similar to LeFou). On paper, this was working for the aforementioned characters, but for Jason and Kimberly, not so much as their “issues” were apparently being dickheads…and that’s it. They’re also set up to have character arcs were they learn to change their outlook on life, but it falls entirely flat because these writers are just not equipped to handle this kind of development. Which makes sense when you find out five people in total worked on the developing the story, while one dude (John Gatnis) was put in charge of the dialogue and he’s really not good at capturing younger generations and the way they talk to each other. Which is a shame, because the younger actors were all clearly trying to make this shit work even if the screenplay failed them miserably.

What works slightly better are the roles meant for the veteran thespians. Elizabeth Banks was having a ton of fun as the villainous Rita Repulsa, overacting as something that closely mirrored the original’s absurd screaming. Even if her motivation’s a bit unclear, Banks injects a ton of scene-chewing that makes her infinitely watchable and makes her absence on screen that much longer. Brian Cranston is doing slightly better than his original appearance on the television show (no really), but he’s still confined to a wall and isn’t really allowed to go much beyond a guiding voice to the angsty team. Hader has a bit more fun as Alpha-5 and makes him somehow slightly less annoying than his extremely irritating counterpart, so that’s another plus in the film’s favor.

What seriously doesn’t work in this film is a painfully weak second act that appears to just be a training montage as the teenagers learn to be Power Rangers. The problem is, you don’t get any Power Rangers action until the last 20 minutes, and are instead treated to badly choreographed fight scenes were the teens punch and kick rock monsters of a good 45 minutes in between all their bickering. The point of this segment was to set up some internal strife between the teenagers that impede their progress to becoming superheroes. But it’s all for naught when you barely get to know the individual teammates except for two of them, and even they don’t get that much of an arc. It’s a slog to get through that it was seriously making me wonder whether to hate this film completely or not.

But, as has been explored before, a fun third act can indeed save a film from atrocity. And I will freely admit that the film gives you the goods in its climax of a Power Rangers film complete with martial arts and giant robots (or the Zords) tearing shit up on screen. Now is it stuff you’ve seen before? Yes, if you’ve seen Kong: Skull Island or any odd Transformers flick. That being said, I found myself having fun with the last twenty minutes and so was the rest of my audience who were all clearly there out of their love for the original show.

Keep in mind, I don’t have much connection to this material. Most of my friends in elementary school loved the hell out of Mighty Morphin’ Power Rangers, but I was far more into Teenage Mutant Ninja Turtles, Animaniacs, and the entire Disney Afternoon programming block. What I know about the property is mostly through osmosis and the power of Wikipedia; and while it’s never been for me, I understand why some people have formed an attachment to it. And as a film born out of the nostalgic love for it? Well, it gives the fans exactly what they want warts and all. While I see fans getting everything they want, they also get a grimdark reinterpretation of their favorite characters…and that will definitely grind my gears.

Because why the hell would you do that with characters that are clearly aimed towards children? You can say all you want that “oh they’re just allowing these characters to grow up with their audience,” but that doesn’t change the fact that there’s STILL an ongoing television series clearly aimed for children. I don’t mind them tackling more mature themes…but they don’t. All their doing is making the character more angsty, not more mature. Major difference.

It’s not a deal-breaker, but make no mistake: this is not a good movie. Not by a long shot. Fans can try to convince themselves otherwise, but everything that is great about it has been done better by other films. Still, the film at least tried which more than what I can say for Michael Bay’s studio’s handling of the Teenage Mutant Ninja Turtles and Transformers, but it’s also shed a lot of what made the original show a unique oddity. So with that, I’ll give this a higher…