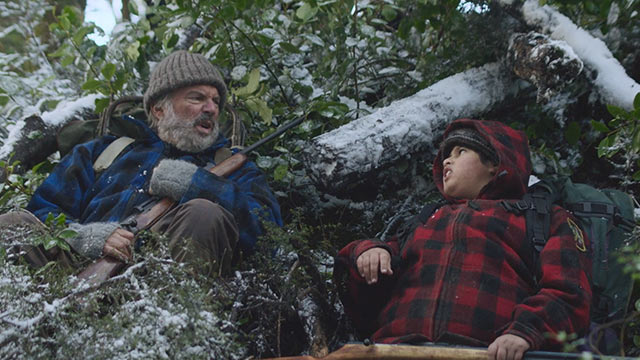 Hunt for the Quirky

I can recognize when certain concepts, namely comedy, feel off to me when it comes from a different culture. And that’s not a bad thing, every society has their own desires for what makes people laugh, cry or inspire; but certain stories may not have the intended effect on foreign audiences. I bring this up because I should point out that British comedy tends to be hit or miss for me. While I’ve appreciated the dry wit in certain movies like What We Do in the Shadows, Hot Fuzz, Four Lions and most of Monty Python; I’m less enthused with fare like The World’s End and Pirate Radio. I bring this up because Hunt for the Wilderpeople walks the fine line between what I like and don’t like about the comedy from the Brits and their respective former colonies.

Taking place in New Zealand, we’re introduced to a juvenile delinquent named Ricky Baker (Julian Dennison) getting taken to his latest foster home out in the deep forest. His new Guardians are the cheerful and surprisingly cool Bella and her rugged and curmudgeon husband, Hec (Sam Neill fresh of his various television successes). While Ricky initially wants to run away from his latest home, he’s so charmed by Bella and Hec’s lifestyle that he decides to stay with the quirky couple…until Bella passes away and following her quirky funeral, the quirky child protective services want to take Ricky to yet another home. Ricky opts for door number 2, which is to run away with his new dog named Tupac (see: quirky). Hec catches up with the kid and just wants to be rid of any legal troubles with him, but the pair end up getting lost in the wilderness for several weeks. When they finally make it back to civilization, they find out that through a series of misunderstandings that both are now subjects of a national manhunt. Left with no other option (kind of), the pair decide to go on the lam in the Zealand wilderness while agreeing to look out for each other as equals.

That premise sounds great to you? I’m glad you agree random Internet person, because you’ll understand my frustration that it takes the film 35 minutes in a 100 minute film to get to this good part. Instead, what do we have for a first act? A boring introduction to our characters explaining how fucking quirky they are through their offbeat dialogue ripped straight from a Wes Anderson film while couched between folk music blaring throughout (actually the music continues throughout the film at large).

I’m getting my dislikes out of the way first because I genuinely liked a good portion of the run time when it’s all about Hec and Ricky. Ricky’s a surprisingly decent shot that Hec doesn’t mind keeping the boy around, and Hec’s bitter old attitude makes him the ideal “uncle” for Ricky (he keeps referring to his foster parents as auntie and uncle). The pair even get various solid banter going as they talk shit to each other or about their situation in ways that please me greatly as they were both charming dicks to each other.

It’s these moments that the film makes me fondly recall last year’s What We Do in the Shadows, which got an honorable mention from me in my Top 10 list of 2015. When I went to go look up this movie for background information, I was pleasantly surprised to find that the director of Shadows also directed Hunt for the Wilderpeople. Taika Waititi has been quickly making a name for himself as New Zealand’s premier director after his successes in Flight of the Concords as his films have become the country’s most critically praised and most commercially successful films, giving me higher hopes than I expected for this year’s Thor: Ragnarok. On top of all that, Wilderpeople in particular would hold the distinction of being New Zealand’s highest grossing movie…if any of the Lord of the Rings movies did not exist.

Waititi’s style is to focus on a core group of characters in a preposterous situation serves him well in the second and third acts of the film, as our pair keep coming across strange people along the way from people in need of their help, the cops, bounty hunters, paranoid mountain men (one straight up calls himself “Psycho Sam”), and even fans of the pair’s exploits. It’s these moments that make me quickly forgive the overuse of folk music throughout the movie, and they let me enjoy Neill and Dennison’s performances.

Dennison is a wonderful find for a child actor. He plays his role as a delinquent quite well of a kid who listens to rap music and obssesses over gangster films to explain his expressions and his rebellious attitude. Dennison also does a great job of conveying humanity of an orphan, consistently worried that the government system will throw him under the bus while also highly distrustful of adults. His bond with Hec comes more from the fact that the pair are similarly outcasts to society and were both taken in by a woman who wanted to fix and help people.

The loss of Auntie Bella is communicated amazingly well by Sam Neill. This is probably the best thing I’ve seen the guy do in what feels like ages as he communicates the grizzled misanthrope that slowly warms up his child companion (he makes it abundantly clear that he will not treat the boy as a son). But his subtle cues for humanity as a straight man in an absurd situation is what really makes me appreciate Neill’s casting and I’m highly pleased to see that he’s having fun with the material and his young co-star.

The pairing also doesn’t go down the conventional route of becoming Lone Wolf & Cub, instead Neill and Dennison form a pair more reminiscent of The Nice Guys, which is also feature a great duo of hapless fools getting in way over their head. It’s a partnership rather than a father-son dynamic and it works surprisingly well in allowing you to appreciate their misadventure. It’s easily worth a watch, but I’d still say that What We Do in the Shadows was a much stronger final product than this was.

Hunt for the Wilderpeople has to contend with the slow beginning and a pretty weak ending for a comedy. It looks as if it’s going for a balls to the wall finale that doesn’t quite make it all the way there, more like balls to the table and I’m suddenly realizing that original phrase doesn’t make any sense but I’m too deep into this shit now and…sorry got lost for a moment. Kinda like this movie’s climax (segue!) since which feels a bit underwhelming to what the movie was building itself up to. It’s not a deal-breaker, the film gives you a decent denouement that’s both fitting and bittersweet in the all right ways to patch the ending up a bit.

Still, the movie does way better than some quirky comedies that I felt fell flat on their face. So while it won’t make my Best of 2016 list, this is still a solid…

2 thoughts on “Hunt for the Wilderpeople Review”