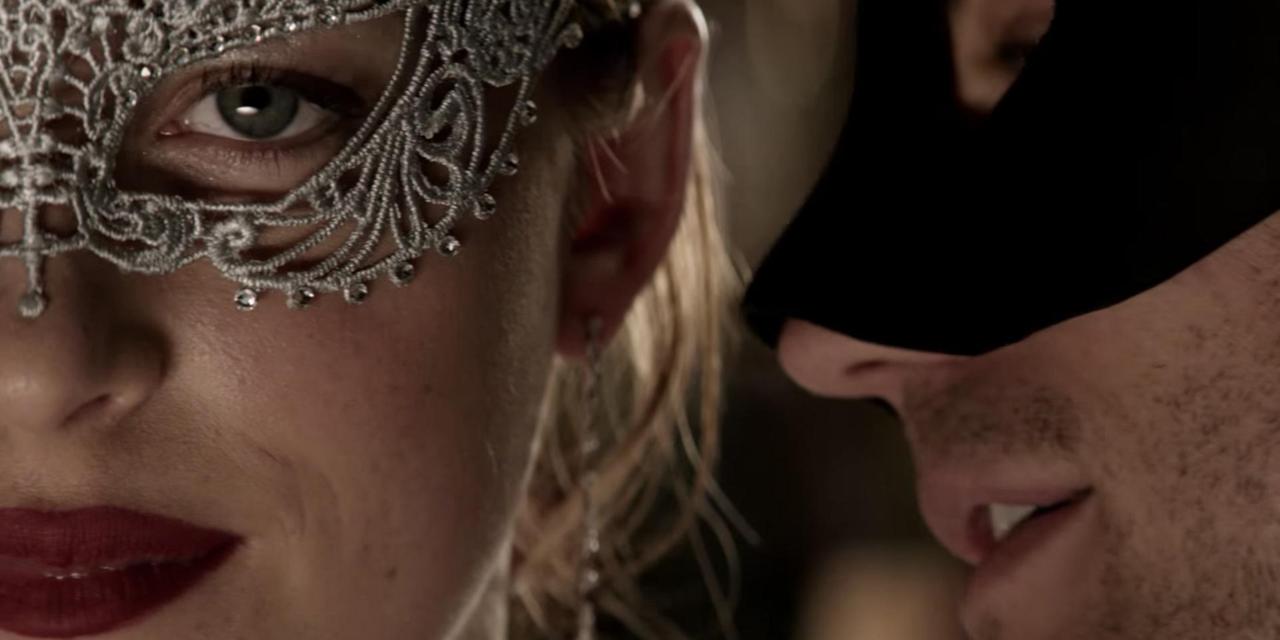 Alright, let’s cut the bullshit first: no one seeing this movie expects this to be good or even passable. That ship has sailed and is already writing us postcards from the other side of the world at this point, wishing we were there. Similarly, you’re not seeing this review expecting me to be praising of it, because barely anyone wants to say anything positive about this tower of sexist bullshit. Instead, consider this review to be an autopsy of a body that suffered from forty-seven different sexually transmitted diseases, the bubonic plague, and spontaneous combustion. There’s blood and entrails everywhere, it’s a disgusting mess, but hey…somebody has to figure out what the hell went wrong if only to prevent this horrible disease infecting any other poor soul again.

So the film begins a few days after the end of Fifty Shades of Grey, where (spoiler alert for anyone who actually gives a shit) our protagonist, Ana, dumped billionaire sadomasochist , I mean Christian Grey because she didn’t want to take part anymore in the worst of his kinky sex practices. What was the horrible act she couldn’t bear anymore? Getting slapped in the ass with a belt…and he looked considerably bored as he did it. So after that mess, we find her starting her first job two weeks out of college as a secretary for a publishing company (one unrealistic fantasy at a time E.L. James) and reconnecting with her “platonic friend” (and I say that with big, neon flashing quotation marks) Jose. Mr. Friendzone should have been out of Ana’s life by now as he tried to take advantage of her while she was drunk off her ass in the beginning of the last movie, but they appear to have patched things up offscreen in our sequel. Because clearly such a horrible line-crossing act is something you get over in a phone call.

Anywho, Jose’s invited Ana to an art exhibition featuring all of his photographs…which are all giant portraits of Ana that were taken without her knowledge. While she understandably freaks out and realistically chastises Jose for his second violation of privacy, the duo learns that all of the portraits were bought by a single buyer. Gee, I wonder who it could have frigging been?

With an introduction straight out of a slasher flick, Christian Grey re-enters Ana’s life; and after a single dinner date together, they agree to give their relationship another chance…a mere few days from the breakup. Now far be it from me to judge someone for getting back with a guy who’s clearly a physical abuser, but what the fuck? Why are we indulging the fantasy that so many women have gone through of wanting to change a broken man, when so many of said women (and some men) know good and goddamn well this shit doesn’t happen overnight if at all. Regardless, apparently Grey’s now willing to enter into a purely “vanilla” (their term, not mine) relationship where they have no dominant-submissive rules in their daily life. Well…do they anything kinky in the bedroom?

Also, curious for a film very clearly aimed at the female demographic, you get way more shots meant for the male gaze than you do admiring Dornan’s physique. I think the dude has his shirt off for a grand total of two minutes in this two hour (yes seriously) production, whereas you get copious shots of Dakota Johnson’s naked breasts. Hell, you only get a shot of the crack of Dornan’s ass compared to the first movie where they teased women with a blink-and-you-miss-it shot of the shaft of his penis. At the very least, women are treated to a cunnilingus scene which is admittedly pretty rare for a Rated-R flick. I believe only Black Swan and Gone Girl were the most major productions to slip away with an R rating without getting hit by the NC-17 rating which would prevent its release in most major theater chains. Nonetheless, the sex scenes feel incredibly passionless and devoid of any life, which may make you wonder what the hell else this film has to offer if the sex scenes aren’t impressive at all?

Don’t expect anything from the actors who seriously fail at convincing you that they even like each other, much less have the hots for each other. Now I’m not going to be hard on either Dakota Johnson or Jamie Dornan this time around, as both have been defended by other friends and critics that I know of turning in much better performances elsewhere. So I’m going to blame this painful-ass script for robbing either of any chance to shine. Seriously, every line uttered by either thespian is torturously painful to hear, with such choice options as “I don’t know whether to worship at your feet or spank you,” “I don’t want anyone else gawking at you,” or the immortal “Curious?” And it doesn’t help that either actor deliver their lines with all the passion of ordering a value meal at McDonald’s.

Now I know what you’re thinking, “So the script sucks, the acting sucks, and the sex scenes are terrible…how bad could the story possibly be if you’ve barely touched on it?” Oh, my children, I was saving the best dissection for last. Because the beauty of discussing the story to Fifty Shades Darker is that it’s literally impossible to spoil because there is NO plot. That’s not an exaggeration or a dismissive insult, this film has no goddamn story at all. It’s a collection of scenes that have fuck and all connection between them. Worst, this film has a horrid tendency of introducing the tiniest amount of conflict which is resolved instantaneously.

Look, for a thriller to work (and bear in mind, this film is actively marketed as a sex “thriller”) you need to keep the audience in suspense that something terrible may befall our protagonists that is looming over head. Apparently, that’s too fucking cerebral for Fifty Fucking Shades Darker, so the film presents a threat one minute, and the threat is neutralized in the next two minutes. That’s the opposite of suspense, that’s like throwing you a cheap jump scare in a terrible horror flick. I need to go into specifics now, so if you’re that bothered, tune out and drop to the end of the review for the rating (oh wow, wonder what could it be?), everyone else can brace themselves for some incredible stupidity.

So as I previously mentioned, Ana’s now started working for a publishing company in Seattle and we’re introduced to her boss, Jack Hyde (hint-hint-evil-evil-wink-wink-nudge-nudge) who tries to flirt with Ana for all of a few seconds before Christian Grey bursts through the door, declare Ana as his property, and whisks her away from her employer. While she was mildly annoyed by this (as opposed to, you know, dumping his ass on the spot for being a controlling sociopath), half an hour passes before we’re introduced to Hyde again and he attempts to assault Ana in his office. At this point, Ana pulls some Krav Maga out of her ass, runs away out of the office into Christian’s arms outside, and in the next scene Hyde is fired from the job. This is because Grey was buying out Ana’s company anyways (because he must own every aspect of Ana’s life at all times).

We also have Bella Heathcothe (Jane from Pride & Prejudice & Zombies) as one of Christian’s former submissive that is now stalking Ana on the street, while pulling some Batman-esque disappearing acts to evade our protagonists’ line of sight. Now the film could have presented to us a view of how Christian has coldly viewed his exes and how his treatment of them have practically ruined their lives; but nope, the film just presents them as a crazy-ex who just views Ana as another rival for Grey’s affections. You might think that’s offensive, disturbing, and all around unpleasant, but hold your horses! It gets worse.

See after one single scene in which the ex trashes Ana’s car (and the couple go on lockdown to rival U.S. presidential security), the ex reappears in Ana’s apartment with a gun. After the clearly disturbed woman pulls the trigger to let Ana know she’s not fucking around, Grey appears and is now in the thick of it. Now this could make for a great standoff where we explore a tragic reunion and force Grey to learn the horrible cost of what he’s done to people, but alas that must have been too freaking boring for E.L. James. Instead, Grey utilizes his dominant-submissive routine on the woman, to which she complies and hands over her weapon while kneeling on the floor as if she was a good little slave.

Hope you were drinking something as you read that to have a spit take; please consume the beverage of your choice and re-read the previous paragraph for maximum effect. Got it? Good, now you may proceed with screaming “WHAT THE SHIT?!” How on God’s green earth could anyone buy this is a disarmament tactic? Especially when it looks like Grey should be wearing a Sith lord cloak while using the Force to keep this woman docile? It’s utterly batshit insanity that Ana continues to hang with Grey after this as this woman basically presents herself as a warning for what she could become if she continued to hang around Grey. But nope, instead she seriously considers marrying the dude after this disaster…yes freaking really.

After these two bizarre developments, it would be impossible for any other film to get any worse than this. But Fifty Shades Darker is no other film. We complete a trifecta of disturbing shit with the introduction of Kim Basinger as the woman who introduced Grey to BDSM. And goddamn was Basinger ever good? I thought she was in Tim Burton’s Batman, but she never gave another good performance that I know of. Hell, she was the weakest part of the otherwise excellent The Nice Guys. But here, she is not even emoting even when she’s presented with someone who’s a romantic rival to her. Or, more disconcertingly, she fails to act like someone who raped another person, and her character is very clearly established to have molested Grey. Her addition to the film is straight up surreal as you know this film isn’t equipped to handle such heavy subject matter, and surprisingly drops it when it realizes it couldn’t swim in the deep end.

What I mean is that Basinger is hardly in the movie to embarrass herself. In one scene in the middle she warns Ana that Grey can’t handle anything other than a BDSM relationship, then the ending comes with another scene with her reaffirming her warning to Ana that’s overheard by Grey’s adoptive mother (because Grey’s real mother was a “crack whore” according to the first movie and looks like Ana…guess we can add Oedipal Complex to the long list of fucked up shit Grey is into). At that point, Basinger is gone from the movie before the big finale which is just someone in the darkness burning a picture of Christian Grey with a cigarette. All that was missing was the character shaking their fist into the sky while screaming, “And soon I will have my REVENGA!”

People, do I need to explain in any other way why this film is a nuclear explosion? I’ve sifted through the remains of Chernobyl at this point and now have to deal with the effects of the fallout for years to come. This is a godawful film with zero redeeming qualities about it. Even if you’re a fan of this series, you’ll find the translation to be laughable when you have live actors saying these dialogue choices out loud. At this point, Fifty Shades Darker is a strong contender for the absolute worst of 2017 and deserves my lowest possible rating…