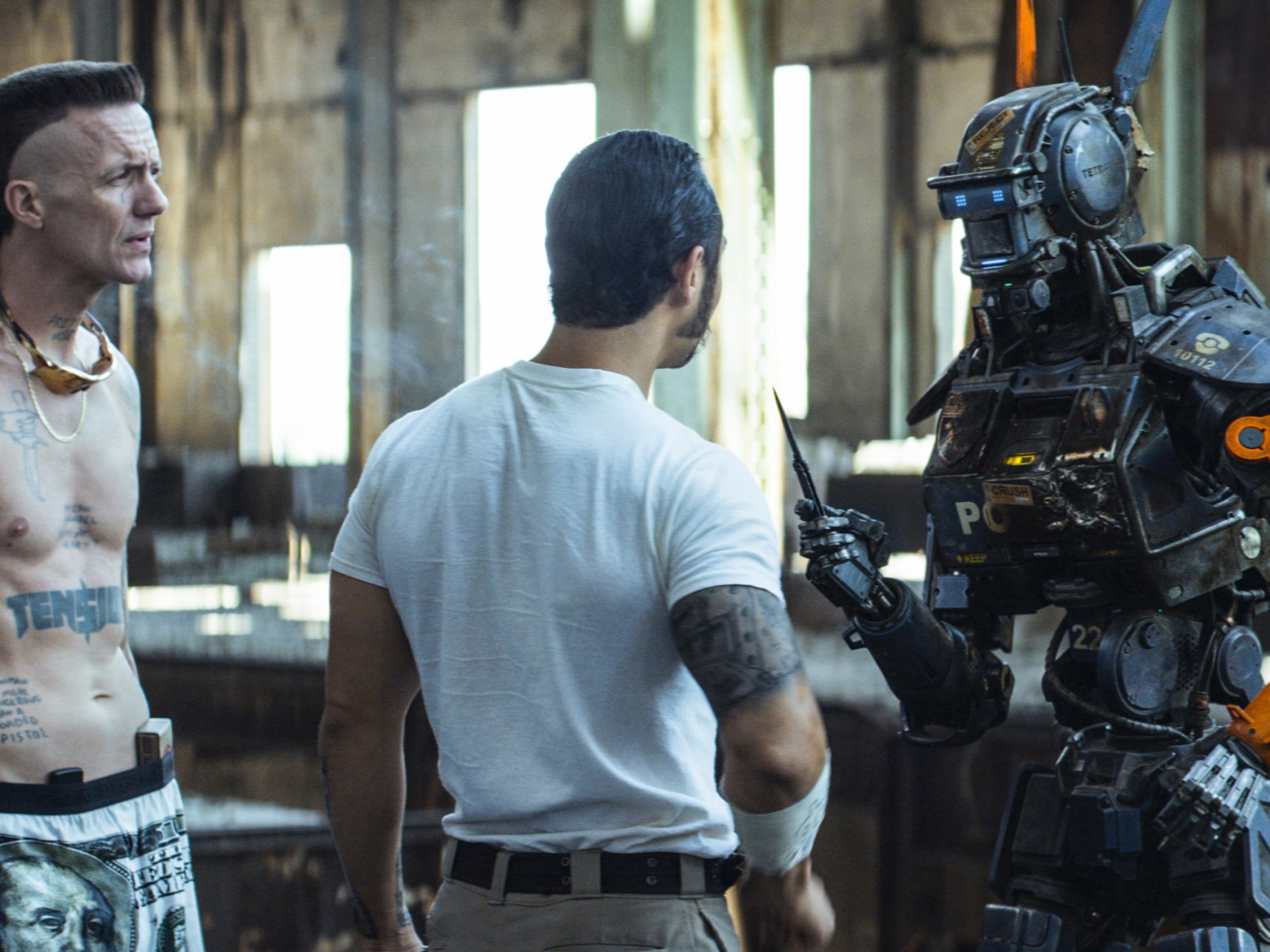 You remember that kid who got As back in school and was doing so well, but then you see them a decade later to find they’re being arrested for cheap Ponzi schemes? You know that feeling of absolute disappointment for so much wasted potential? That’s kind of where I’m at right now with the director of District 9, Neil Blomkamp, who’s latest unofficial remake of Robocop and Short Circuit is painting a sorry future for the once promising director.

As in District 9, we find ourselves in future Johannesburg, South Africa, also known as Even-Worse-Than-Detroit. Crime is so rampant that the police force had to employ robotic officers to deal with the well armed criminals. These officers, Scouts, were designed by Deon (played by Slumdog Millionaire Dev Patel) who really designed the robots to design true autonomous artificial intelligence. Since his boss (Sigourney Weaver) doesn’t want to fund the experiment on the company dime, Deon smuggles a broken Scout out of their factory to try his AI experiment on who becomes the titular Chappie. That plan goes to hell when he’s kidnapped by thugs played by Die Anterwood.

“Who the hell is Die Anterwood?” I hear you inquire across the web. They are a pair of white South African electronica-rappers identified as Yolandi and Ninja who play the characters of Yolandi and Ninja…yes, these rappers play exaggerated versions of themselves from their own band. Complete with wearing their merchandise in every frame and listening to their shitty music in every car ride.

So if that’s not filling you with any hope, let me keep chipping away. See the duo in the movie are in trouble with a gang leader who looks like he missed the Mad Max auditions demanding $20 million pounds…from a pair of ignorant street thugs. Why doesn’t he just kill them rather than giving them an impossible task? There wouldn’t be a movie otherwise! So that’s why they kidnap Deon to assist them in deactivating the Scouts, but when that’s impossible he instead offers his own AI to assist in their crimes.

Thus Chappie is activated and is essentially a fast-learning child with the strength of a muscle car and the resilience of a Hummer. The film sci-fi concept then turns into a whole exploration of child rearing styles between Deon’s god complex and authoritarian father, Ninja’s manipulation to turn Chappie into a “man” (read: degenerate violent-obssessed hoodlum who dresses “street”), and Yolandi’s crack mom who wants to raise a kid but is woefully out of her depth.

Chappie himself is played by Neil Blomkamp’s boyfriend, sorry muse, Sharlto Copley who provides both the voice and motion capture of Chappie. Even though Chappie is a robot, he looks startingly lifelike with his rusted, dirty look and forces you to wonder if they’re just using makeup rather than computer images. The acting is indeed solid from Copley…but he’s not given enough to be likable.

Over the course of a few days, Chappie goes from infant-intelligence to bratty punk to tech wizard hoodlum. That’s not a character arc but a character roller coaster. Not helping are the various times Blomkamp tries to intentionally manipulate your feelings with scenes that are way too thick.

At one point Chappie is hunted down by main villain Hugh Jackman (I’ll get to him later) and thrown in the back of a van so he can take a computer chip from Chappie. Chappie is restrained and cries out for help from his “mommy” while Jackman takes an electric saw and hacks an arm off while Chappie pleads to stop. He’s then laid on his stomach while Jackman does his business of taking the chip directly from his body. Chappie manages to escape and returns to his surrogate parents to tell them in a child-like voice about the “Bad Man in the Van” and how he hurt Chappie “even though he said stop.” Holy shit, now that I just typed that I realized how freaking dark that was.

But that’s the biggest problem with the movie: it’s a Saturday morning cartoon show reinvisioned as an R-rated action movie. And it does not work. Everything is laid on too thick with a bunch of one dimensional or unlikable characters or wasted potential on great people like Sigourney Weaver. But the biggest sin is Hugh Jackman’s character.

He’s depicted as an ex-military religious nut who wants to replace Deon’s Scout program with his own Robocop rip off of ED-209 (that bipedal tank thing). In an age where people are loudly decrying the use of military equipment by police officers, Jackman’s proposal is insane. Add to the fact he gleefully slaughters poor people with his monstrosity, while LITERALLY tearing them apart, you realize Blomkamp does not know the definition of subtlety.

The tragedy of the movie is that it looks amazing. The action scenes are well shot and Chappie himself is an amazing feat of technology in filmmaking. But without a decent story or a likable character, it falls flat.

This is not worth checking out in theaters, but if you’re still interested then I would recommend this as a low…