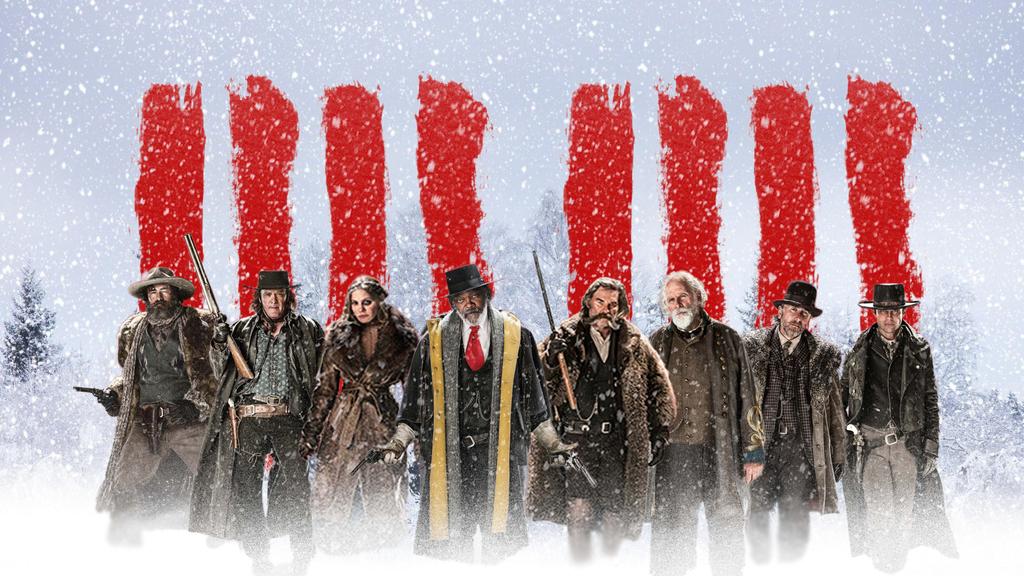 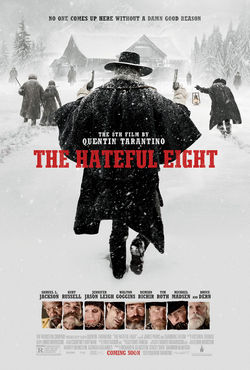 Quentin Tarantino is probably one of the most frustrating directors for me. Yes, Pulp Fiction is one of my all time favorite films, and yes, I really dug Kill Bill and Inglourious Basterds. However, Deathproof was what happens when a forty-year-old man talks to college girls on MySpace in order to get an idea of how teenagers talk (that’s not a fucking joke, that’s LITERALLY what he did). And Django Unchained was a tonal mess between comedy and dark horror only saved by great performances by everyone EXCEPT the main character while trying to break the world record for saying the N-word more times than any other film. Tarantino, in other words, can craft dialogue better than anyone in Hollywood even though he keeps holding himself back by bizarre eccentricities. So how does The Hateful Eight compare?

Well, it has everything that I love about Tarantino with a little bit of what I hate about him…some things never change I suppose. The film itself is about eight strangers stranded in a cabin some time after the Civil War as they slowly realize they are all connected to each other through deadly liasons. That’s all the plot you’re getting for me partly because it’s fun to learn the plot on your own and partly there’s so much to parse through that a single paragraph won’t really do it justice.

But what we do have are tons of fantastic actors bouncing off each other in some of the most tense dialogue exchanges I’ve seen all year. Tarantino is and has always been a master script writer even if he does love the N-word more than what I’m comfortable with. Mostly because he interjects not for dramatic purposes but for straight up comedy, which can be hit or miss or me. Nonetheless, it says a lot that I found myself on the actual edge of my seat listening to Samuel L. Jackson quietly antagonize Kurt Russell and Jennifer Jason Leigh without anyone even flashing a gun in sight.

Part of what makes the film so tense is that you realize it’s a whodunit, with each of the eight characters making fragile alliances as each suspects the others are not who they say they are. What’s more is that you care what happens to each character not because they’re likable (on the contrary, every last one of them is absolutely despicable) but because they’re interesting. They feel like exaggerated three dimensional people, less than the film type of characters we’re used to and more like stage-production quality.

Complimenting the script is rather stunning cinematography utilizing 70mm film stock (most audiences don’t really give a shit about technical jargon like this, so I’ll put it you in layman’s terms: it looks really pretty). Beautiful landscape shots of pounding blizzards are accentuated by a fantastic score composed by Ennio Morricone, a legendary composer for classic Spaghetti Westerns like For a Few Dollars More and The Good, The Bad, and The Ugly.

So I’m gushing about this film a lot, and rightfully so. This film has already cemented a place in my Top 10 of 2015, but I’m not going to give this a Better than Sex. Mostly because the part of Tarantino that I don’t like rears its ugly head towards the end of the film. The side that caps a tense dialogue exchange with a gratuitous explosion of violence.

Now people complaining that this film is too violent are dumb. Mad Max: Fury Road was more violent, Kingsman was more violent, and hell, fucking Star Wars was more violent than Hateful Eight. However, when violence does erupt on screen, it’s not a mere gunshot…no, people’s heads explode using revolvers as if you stuck a damn grenade inside their mouth. It’s that fountain of blood from that lady in Kill Bill all over again. But unlike Kill Bill, which the first film was a straight up action film, this is more of a dark comedy that goes for violence so absurd that you can’t help but laugh at how ridiculous it is. The ridiculousness yanks me out of the film like a trebuchet and suddenly I’m not immersed in the film anymore and I remember I’m sitting in a theater watching a movie.

It’s a shame, because the film really do not need to go that far. It could have had the deaths with a little bit of blood splatter and it would have had a weigthier effect on the violence much like scenes in Kingsman and Mad Max. I can’t help but feel this script would have been amazing as a stage play, where Tarantino would be limited by being unable to blow people’s heads up (though with his coked-out ass you never know).

Regardless, should you see this film? Yes. It’s a damn fine film and it’s still particularly memorable for me three days after I saw it. Right now, you can catch the film on a “Roadshow” type experience that’s about three hours long complete with 15-minute intermission and playbills handed out before the show. It’s an impressive production and a great theater going experience. Otherwise, catch the two and a half general release coming in the next few weeks before Oscar season.

Even with my frustrations, this film is still a solid…

4 thoughts on “The Hateful Eight Review”