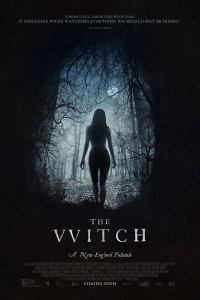 Evil comes in many forms…one of them happens to be a bunny….no not the Monty Python one.

This is going to be one of my stranger reviews; because I’ve seen tons of love for this movie and I did in fact find lots to dig about it…and yet I’m not tearing off the movies clothes. Why? Well, we gotta dig a little deeper.

We’re following a family of Puritans who’s patriarch was kicked out of their plantation being a little overly dogmatic…well dogmatic for a Purtian that is. The family consists of the religious William, his wife Katherine, and their children Thomasin (Anya Taylor-Joy), Caleb, fraternal twins, and an infant. They set up a farm out in a clearing to live off the land and the rest of the movie is about a Puritan family living in the harsh wilderness of New England…oops, wrong review, I mean the infant son gets kidnapped by an honest-to-God witch that murders the kid and rubs his blood all over her. Oh yes, this is fun for the whole family.

One of the biggest praises of this movie that I wholeheartedly agree with is that the movie lets you know up front that there is a witch somewhere in the woods and she means this family harm. None of this Crucible business with the Salem Witch Trials and how horrible it was to be a woman in the 1600s, this is a straight up horror flick with a child-murdering witch serving as the catalyst for the rest of the family’s troubles. The funny thing is, after the film’s twisted opening, you really don’t come back to that Witch and are mostly hanging out with the Puritan family dealing with the abduction.

This surprisingly turns out to be a smart move on the film’s part because all the members of this family are tragic and deeply flawed characters going through a traumatic event. The movie feels more like a period piece drama than a horror flick until the halfway point in the movie (which I’ll get to soon). The parents have a lot going on with the farm not meeting up to snuff and dealing the loss of their infant child while their twins are acting very peculiar. The older son in the family is going through puberty like a motherfucker and is checking out his sister in a very teenage sort-of-way. Finally, the daughter Thomasin is our primary focus as she gets most of the shit from her mother for all the wrong that has happened to this family thus far.

It’s really compelling stuff made all the more impressive that the actors are utilizing very old English dialect, what with your “doth’s” or “thee’s” with some very appropriate clothing really selling you on the setting perfectly. But all these details are filmed very close to give you a very claustrophobic look as the rest of the movie spends its time building an air of dread and suspense as you notice, to put it in layman’s terms, “that shit is fucked up.”

The missing infant was one matter, it’s more bothersome that the animals around the firm are acting strange. A mere bunny just stares down the family’s hunters without flinching when he starts getting the other farm animals going. A goat named by the twins to be “Black Phillip” is acting stranger than the other animals with particular aggression while the twins claim he “talks” to them. And of course, you get your healthy dose of animal disembowelment.

All of these events are just scratching the surface of what you’ll witness in The Witch, and the movie is to be commended for building such a creepy atmosphere as things slowly start to more and more wrong for this family. This is done all without jump scares or the usual tropes you see in horror movies. Because a good horror movie should show you the dark side of the human condition, whether it may be an Oedipal Complex in Psycho or fear of losing control as in Rosemary’s Baby. As the problems mount, the family starts to turn against each other. Here is yet another brilliant stroke with the movie as it deals with themes of trust and secrets, as each family member is keeping stuff from the others. Whether they may be personal feelings they’ve had since before arriving at the farm or suspecting Thomasin of being a “witch” who has cursed this family.

The actress portraying Thomasin did such an excellent job, that I really wanted to single her out among the great cast. She’s able to communicate a lot of emotions through the 90 minute run time, ranging from teasing her siblings to repentful for unknown sins to being remorseful for what happens to each member of her family. We mostly follow her through this movie and she serves as an excellent guide to the hell that her family is being put through by this unknown force.

And “unknown” is the key word here. You never know why the witch did what she did in the beginning of the movie, and you don’t know for sure if you’re witnessing something truly supernatural or if it’s just plain shitty luck being blamed on supernatural horror. The guessing game and paranoia of what was real dark shit or not was highly effective in drawing me in and making me say “shit, shit, shit.”

That is, until the end. The ending has been praised by some critics to be some masterstroke in filmmaking, but it felt to me like an M. Night Shyamalan-esque ending from out of left field. It was so odd that I didn’t find it scary or disturbing as I did the rest of the movie, it felt kind of goofy honestly. And it yanked me out of the movie before cutting to credits so I was left with a poor taste in my mouth.

Granted, in writing this review, all the good things I mentioned reminded me of how damn effective this movie was at getting under my skin. But I will always remember that ending as being so out-of-place with the rest of the movie that unfortunately I cannot love it as much as I’ve seen others do. There’s plenty to dig about this movie as I told you, but I assure you the ending you’ve got in your head is totally not the ending you’ll wind up getting.

Slightly disappointing, but there is some damn fine film making to be found here. The acting, camerawork, and production are values are so well done, and they’re further complimented by this oppressive score letting you know that you and this family are not safe.

So for all the good this movie has done, I’m going to give this a high…

4 thoughts on “The Witch Review”