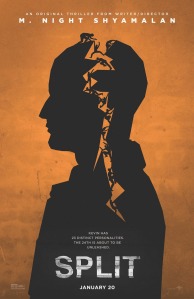 Director M. Night Shyamalan’s filmography is one of the greatest cautionary tales in Hollywood. While introducing himself to the world through his first flicks of The Sixth Sense and Unbreakable, followed up by the well received Signs, people were ready to declare the man the next Spielberg or Hitchcock. And then he proceeded to piss all that good will away with films that had nonsensical twists like The Village and Lady in the Water to an idiotic foray into the rated-R realm with The Happening to a last ditch effort in order to reinvent himself as an action director with the despicable The Last Airbender and the boring After Earth. Things looked bad for M. Night until he found pity from the one man in Hollywood who would be crazy enough to give him money: Jason Blum. The catch was, however, Shyamalan had to operate under a micro-budget of $5 million. He was able to turn out a decent profit with his first Blum co-production of The Visit, which got him another $5 million to make the film we have today.

Split follows James McAvoy as Kevin, a man suffering from a form of Dissociative Identity Disorder that allows Kevin’s physiology to change dramatically depending on which of the 23 identities are in control of his body. One is diabetic, but the others are not; one is a gay fashion designer; and another is just a studious book nerd. While the 23 have been living a content “life” in Kevin’s body under the guidance of their therapist, Dr. Fletcher (Betty Buckley), three of Kevin’s personalities have now usurped control and have kidnapped three teenage girls (played by Jessica Sula, Haley Lu Richardson and The Witch‘s Anya Taylor-Joy) to sacrifice them in order to welcome the 24th personality, an entity known only as The Beast.

Right off the bat, Kevin is a dream role for an actor because it allows the thespian to showcase a wide range of emotions and characters all within a two hour period. And McAvoy rises up to the occasion to deliver multiple distinct performances in somewhat surprising ways. One of three worshipers of the Beast, for instance, has a nasty case of OCD while another is the aforementioned gay fashion designer. What’s cool is that the OCD personality tries to impersonate the designer one’s voice to fool the therapist into believing nothing is wrong, but cannot stop rearranging items in the room. In other scenes, one of Kevin’s personalities is a 9-year-old boy named Hedwig who talks with a strong lisp and a fundamental misunderstanding of certain words. These scenes made my whole theater laugh out loud, even though it was a bit on the disturbing side as well; but what was particularly effective was one moment where Hedwig gives control to a matriarchal personality in an instant and this one is considerably more scary than Hedwig’s antics. All my praise will go to McAvoy for bringing these characters to life, but I also have to give credit to a man I never thought I’d say something positive about again…M. Night Shyamalan.

Go ahead and check if the rivers have run with blood and the sky has fallen cats and dogs, but M. Night somehow crafted a decent film again. It helps that he finally stepped out of his comfort zone with writing Kevin’s characters and wrote a variety of flavors for their personalities outside of trauma-induced outsider that he usually relies on (though we still have room for one of those). Further, M. Night’s budgetary constraints have made the man finally realize that painful, boring, monotone speeches being delivered directly into the camera has no place in a “suspense” film. Instead, M. Night is now forced to film inside a basement to make a claustrophobic thriller as the captive girls (alright, ONE of the girls) plays a game of wits with the kidnapper to figure out a way to live another day.

The main protagonist would be played by Anya Taylor-Joy, who, like another Shyamalan protagonist from The Sixth Sense, is a kid with a thousand-yard stare after having survived major trauma in her life. Now granted, like Hayley Joel Osment, Taylor-Joy is very effective at playing creepy dead-eyed girls after her stunning debut in The Witch and her follow-up in Morgan. For Shyamalan’s latest, she’s pretty effective at scoping out the scene with Kevin’s various personalities and is apparently quick to deduce the quirks of three worshipers of the Beast while also being able to learn more about Kevin’s condition. The reason for her ability to suss out the differences and weaknesses in Kevin’s personalities is explained through various flashbacks when she took hunting lessons with her dad and uncle, even though these flashbacks serve as a point of terror that her character suffered through. Despite her trauma-induced look, Taylor-Joy is still able to deliver the lines very well and is able to avoid the usual Shyamalan problem of having every ounce of personality stripped away from her while being able to provide a dry comment on how screwed she and her friends are. But her character also happens to have a problem that brings the film down, and it’s not due to the actress’ fault, but it’s of Shyamalan’s doing.

See, the trauma Taylor-Joy’s character experienced is one completely outside of Shyamalan’s usual wheelhouse and honestly, the dude was not ready to handle it. You can probably guess it had something to sexual assault, but the issue is not that the horror is portrayed in an exploitative way (far from it). It’s just that it felt clumsy, as if Shyamalan only heard how sexual assault survivors cope with their experiences but didn’t quite understand what they went through to accurately capture what they were feeling without the depiction feeling. Plus, he didn’t know how to talk about the subject next to his usual bag of tricks like quirky characters eliciting laughter out of the audience. It just felt incongruous to me when you finally get to what made Taylor-Joy’s character who she was and it didn’t help with the silliness of the final act.

Keep in mind, I’m not going to spoil anything (though I will have a separate post to discuss what happens because it needs to be discussed), but the third act drops the tense creepiness for something a little more…campy. The Beast makes his presence known to the various characters and his depiction is just freaking funny to watch. Granted, McAvoy’s performance was quite fine and he spoke with great gusto as the villain, but it’s everything else from the make-up to how the Beast moves makes you start giggling in the theater. While not necessarily a deal breaker, it did bring my overall enjoyment down a notch. Which is a shame, because I was genuinely digging the first two acts and it’s easily Shyamalan’s best work since Signs.

There’s also no twist per se, it’s more like a Marvel post-credits stinger that happens in the last minute of the film. You see, the film establishes a connection with a completely different and established property that you either haven’t seen or have probably forgotten about. If you saw this ending and didn’t “get it,” don’t feel bad because you simply were not exposed to this other film in all likelihood. Like I said, I will go into more detail with a separate post because it’s fun to explain and speculate what are the possibilities for Shyamalan’s future.

Whatever lies in the director’s path, I do hope he can turn a few more quality films to return the man to his original position as “the next Spielberg.” However, I do hope he stays humble through his micro-budget projects that have forced him to become more creative and he doesn’t let that ego swell too much for him to fall back on his old bad habits. I’ll wait for him to give me at least two or three FULL PRICE films before I declare that he’s in the clear, but for now I’m awarding his latest with a very high…