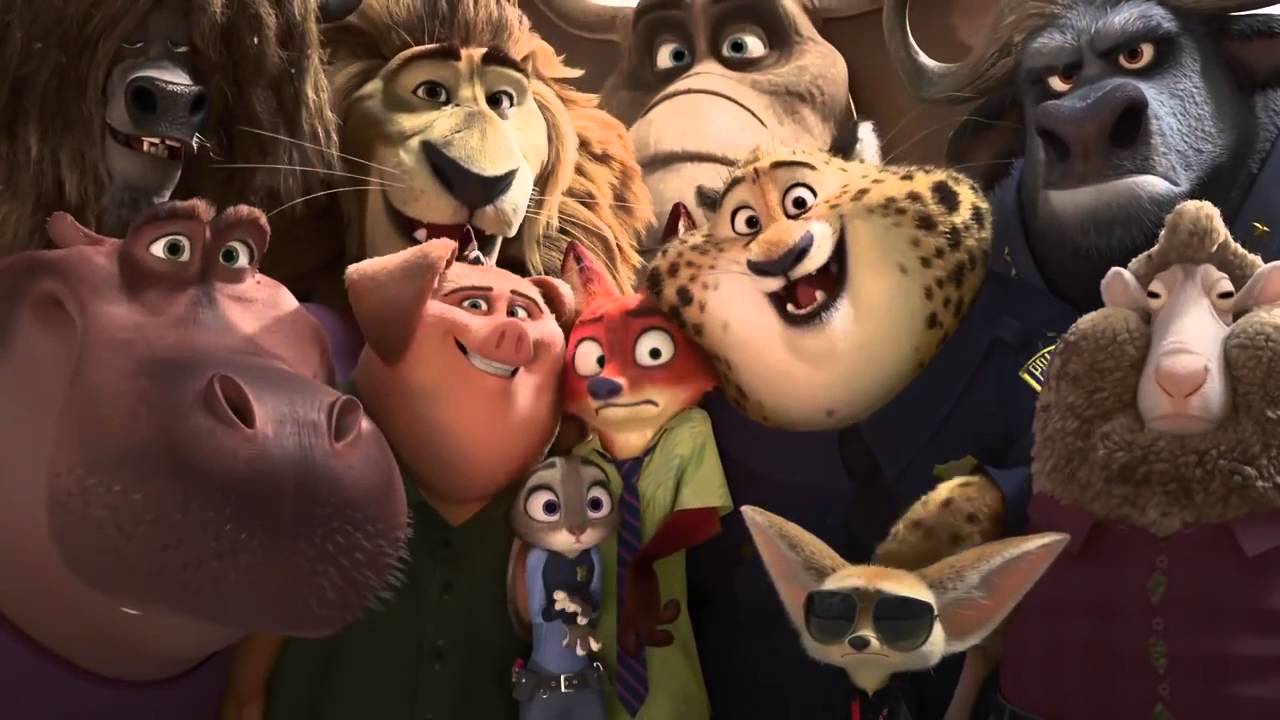 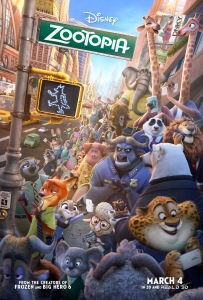 It’s always nice when Disney reminds me how good at animation it is. Doubly so when they decide to talk about racism and sexism in a way Oscar contenders fail miserably to do.

Goddamn this movie is great. So get this, we have the world of Zootopia, a metropolis where anthropomorphic mammals live in harmony together, regardless whether they used to be predator or prey. Moving to this city is Judy Hopps (Ginnifer Goodwin, Snow White from Once Upon a Time), a rabbit who finally realizes her dream of becoming a police officer despite the fact no bunny has ever been a cop on account of the fact they’re stereotyped to be “too fragile.” Even though she desperately wants to be taken seriously, she gambles her career to solve a missing mammal case within 48 hours. But to do so, she enlists the help of a fox con artist named Nick Wilde (Jason Bateman) to solve the disappearance. Through their investigation, however, they discover a dark conspiracy involving predators “going savage” and reverting to their natural predatory instincts.

This is some of the deepest shit I’ve seen in a movie, and keep in mind, I just finished marathoning every single Oscar contender from last year. While I know I’ve harped on race issues in the past, it’s pretty unavoidable here as it’s pushing through racism, bigotry, xenophobia are the main themes of this film. The animals in Zootopia make several stereotypical statements that are eerily similar to racial statements made about Black, Hispanic and Asian groups, while also taking the time to get in some statements reminiscent of gender discrimination. You get references to “Securing the sheep vote,” to “Cute is our word” to straight up “You people? What’s that supposed to mean?” Hell, there’s a scene where a prey-type animal moves her kid away from a predator-type animal in an uncomfortable mirror of shit I’ve seen in real life before my eyes. I mean almost every other line in the beginning of the movie was couched in racial politics…and I loved every second of it.

Don’t take this to mean that these race or sexism issues will not appeal to kids, this is a Disney cartoon after all. But the best cartoons I’ve seen are ones that appeal to children while reinforcing positive messages that are relevant to our world today. Zootopia succeeds on this metric with flying colors while providing you a thoroughly entertaining film filled with vibrant animation and extremely clever jokes. My audience (which was packed by the way) was laughing hard throughout this movie and I personally had a big grin on my face throughout it. Believe me, the comedy is perfectly meant for children but adults can enjoy it just as much. The true definition of “fun-for-the-whole-family” as opposed to “children’s movies” that appeal to little kids and solely little kids (see Home).

The animation is truly astounding here as the storied Disney Animation Studios is now on par with it’s sister studio, Pixar, after delivering this, Big Hero 6 and Frozen. Filled with as much imagination that packed Inside Out that made it one of my favorites last year, Zootopia also delivers lively characters with Judy and Nick as your guides into this world. Every single mammal on screen is drawn with such passion that you could see these characters connecting with a variety of people, and the animation was likely done by watching the actors perform their lines on a sound stage.

Speaking of which, this is my favorite movie that I’ve seen Ginnifer Goodwin in. I don’t watch Once Upon a Time, but friends of mine who are fans absolutely adore her; and here Goodwin shows me just how much range this actress actually has. She also develops as a character should, changing their viewpoint on the world to be more nuanced and more mature as the movie goes on. While Goodwin has to deliver the “message” of this movie (BIGOTRY IS BAD) with all the subtlety of a sledgehammer, she rises to the occasion because it never feels hokey or preachy. It felt “earned” like this is where the movie was going all along and you can remain satisfied that this is the best way the movie could have concluded.

Her co-star, Jason Bateman, is…well Jason Bateman, every bit of a snide dickhead you’ve seen him dozens of time. But the character of Nick is also a dickhead with reasons of his own for being such an asshole. Said reasons feel “real” as you get why Nick became a con artist after seeing his dream of being accepted as a person shattered by people judging him for being a fox…and foxes are “supposed” to be traitorous and untrustworthy. Nick decided to wear this “like armor” and became who he was. His own transformation is also earned and you feel sympathy for him as well.

Complimenting these two are a very entertaining supporting cast including Idris Elba, Octavia Spencer, J.K. Simmons, Alan Tudyk, and even Shakira (who also has her own pop song sung throughout the movie as written by Sia). Each actor injects as much life as they can into their own character that further fleshes out the world of Zootopia to feel like a real place, one that I wouldn’t mind going back to.

I’ve heard some critiques that the movie becomes “predictable” as it basically emulates buddy cop films. Seeing as I had to sit through Ride Along 2, I KNOW how bad this genre can get. And I’m here to tell you that this is one of the finest buddy cop films I’ve seen belonging in the same breath as Lethal Weapon, Bad Boys, and yes, 48 Hours. The buddy cop dynamic is simply used to explain the relationship between Judy and Nick while the plot itself deftly uses hard-boiled, noir detective trappings in the vein of a Philip Marlowe story. This journey from witness to witness to piece together the mystery of the movie that slowly becomes a conspiracy is solidified through navigating the various burrows of Zootopia including Sahara Square, Tundratown, and the Rainforest District. And this whole adventure still manages to be one of the most important message movies I’ve seen in some time.

In an election season that has brought out the worst in American politicians, feeding off fear of Muslims, immigrants, and Black people; this is perhaps the most timely movie of the year. It’s important to teach kids that yes, bigotry does exist and society will do its best to reinforce as many negative stereotypes as it can; but they must also see past the color of someone’s skin or their language to see who a person really is…for good and for ill. And yeah, with people making important decisions at the election booth this year, it’s important for adults to be reminded of this lesson.

I have seen some critics argue that message of this movie is muddled by the central plot involving predators going feral as reinforcement of negative stereotypes that certain races are “sub-human” or “savage” while pointing out that the predators are in fact dangerous creatures. I personally don’t see it that way, as the mutants in X-Men are equally as dangerous as any predator in Zootopia could be considered. And that never stopped Marvel writers from banging the drum that mutant discrimination is meant to be a metaphor for racial and sexual discrimination, so I’m fine with the route the filmmakers opted to take.

I freaking love this movie. Take your kids to see it, because they’ll enjoy every second of it while learning an important lesson in the process. If you have no kids? See it as soon as possible on the big screen. This is so, so close to Better Than Sex and it very well may turn out that way when I see it again (for I WILL see this again). I need to think about the racial metaphor for a bit longer, but for now? This is an extremely high…