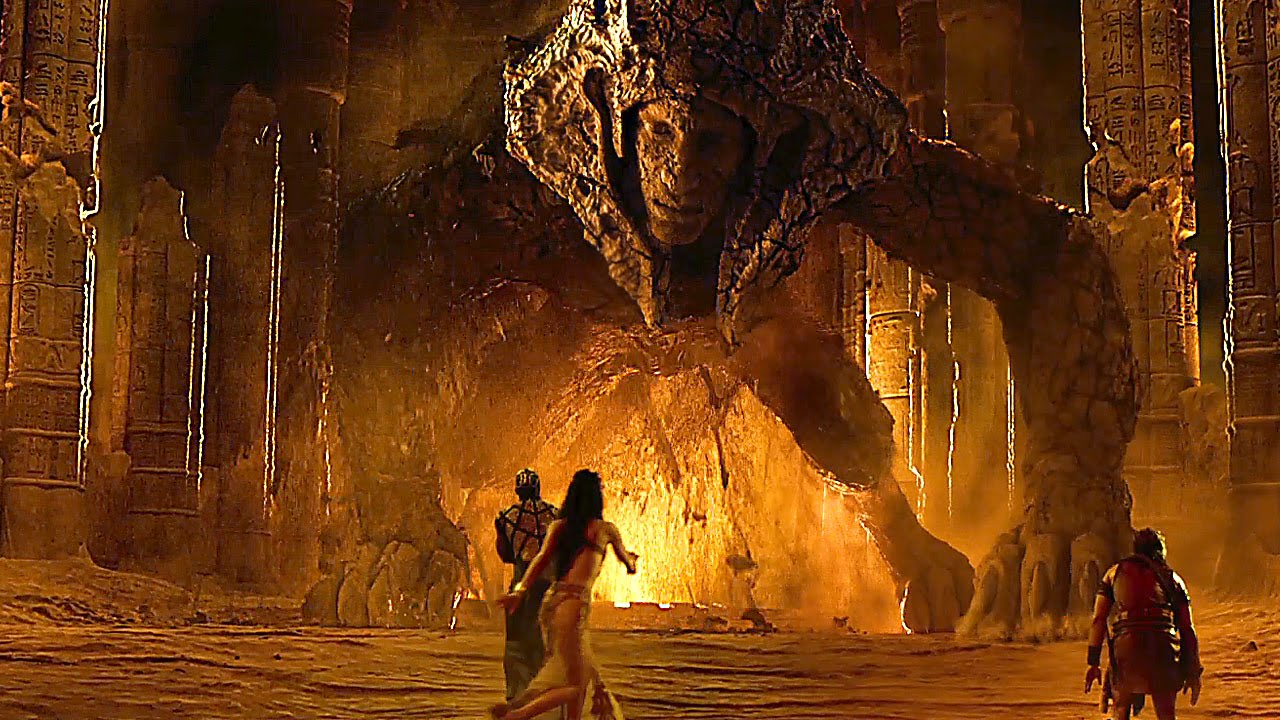 Oh this is a blessed day. Thank ye gods for this wondrous bounty. Thank you for giving me one of the most spectacular failures I have seen.

Yes people, someone thought it would have been a good idea to make a movie called Gods of Egypt and feature only one Black actor in the entire cast. And before I hear the fools crying, “there are Black people in the background,” they only serve as window dressing and more often than not they play the roles of servants and nothing more. This mentality of casting Black actors and actresses in roles like this just further emphasizes just how little we have progressed in the American film industry that Hollywood MUST have white leads and nothing further.

Despite films like Creed, Straight Outta Compton, and the entire Fast & Furious franchise showing that diversity brings in tons of money, some executives and directors with their heads up their own asses still thinking they need a Caucasian lead. But if the race issue were the only problem in Gods of Egypt, then perhaps it would have been a disappointing case study of Hollywood assholishness. No my friends, Gods of Egypt doesn’t just fail on the diversity level, it fails on every conceivable level in making a decent movie.

The plot is an absolute crock of shit in trying to adapt the Egyptian gods tale of the Osiris Myth to the silver screen. For this movie, we have Set (played by Gerard Butler doing a Scottish accent…in fucking Egypt) murdering his brother Osiris and usurping the throne of Egypt (which is basically the entire world if it were flat…roll with it) from Osiris’ son, Horus (Nikolaj Coster-Waldau, a name will you never hear of again because he’s fucking Jamie Lannister). After ripping out both of Horus’ eyes, Set establishes his rule by claiming that all of Egypt can enter the afterlife peacefully if they have enough gold; thereby forcing the rest of the white Egyptians (still not over it) into slavery. Among these slaves is Bek, an Aladdin-esque shithead with the parkour moves of Prince of Persia, trying to save his girlfriend from death. Said girlfriend is constantly rocking a lot of cleavage because the film gives you fuck all other reason as to why Bek would risk his life to save her by stealing one of Horus’ eyes from Set. With only one eye, Horus sets out on a journey across Egypt with Bek in tow to claim vengeance against the Scottish-Egyptian god.

I need to point something out, because my girlfriend and I were similarly confused by this: this is NOT ancient Egypt. This is fantasy version of Egypt where the gods walked and lived among the humans by being significantly larger than the mortals and bleeding gold (I assume to get a PG-13 rating with all the bloodshed involved). On one hand, this might explain why there are a bunch of white dudes in heavy makeup running around while they constantly look amazing because they’re in so much make up. On the other, it gives this movie this alien-like quality I have not encountered since George Lucas’ Star Wars prequels.

Mostly because the majority of this movie was shot entirely in green screen. The backgrounds and sets all look too clean, too fake as if if all belongs in a video game. Extras were replicated dozens and dozens of times, so the crowds all look terrible and completely fake. This also affects the monster sequences in which the actors are fighting various mythological creatures, but the actors’ words and tones are simply not appropriate with what we are looking at on screen. It’s like the actors were forced to make up in their heads what the fuck they were supposed to be looking at. While you can get away with that in a scene or two on many films and television shows, that form of acting frequently goes horribly wrong when the entire movie is filmed that way.

This movie once again reminded me why I loathed the prequels and loved The Force Awakens so much, because you need physical sets and character makeup for your actors to bounce off of. It makes the world feel real, and with sets, your actors have are able to appreciate their situations far more to behave appropriately. Gods of Egypt, by contrast, has nothing but shiny lights and must rely on their actors and art to carry the whole film. And both fail spectacularly.

Let’s rip up the art first. Fuck me, it’s so plastic and lazy. It just feels ripped off from various better movies, cherry picking everything from 300 and Immortals, while slapping on top an “Egyptian-sounding” soundtrack ripped from Brendan Fraser’s The Mummy. Further the art motif is gold…everything is fucking gold. The blood is gold, some monster skins are gold, everything is fucking gold. So when you see two monsters fight each other, it’s a jumbled mess of golden blobs punching and slashing each other. This movie made me reminsce of another special effects-laden film called Jupiter Ascending. While I initially hated the movie, I later grew to appreciate it as a campy misfire from the minds of the Wachowskis with over-the-top acting from the likes of Eddie Redmayne and a general sense of fun. Gods of Egypt is not fun at all, despite the film’s attempts to do so through the character’s dialogue.

Jesus, this script a tonal mess. The actors are literally blabbing words that don’t fit the situation they’re in as they’re running from giant snakes, fighting half-man and half-rhino creatures, or falling from various heights in several flying sequences. The lines themselves are pretty lame jokes with a few painful puns thrown in for good measure, but the actors deliver these lines with all the warmth and emotion of talking to a friend while working out at the gym. It’s so casual, so devoid of any stakes; that you just don’t give a shit and can’t connect with any single character.

Further not helping is that the plot itself is the prototypical, “and then this happened, and then this happened, and then….etc, etc, etc.” This is not good storytelling. A decent story’s scenes should all be connected with logical connections. Check out this short video from Matt Stone and Trey Parker, explaining their rules for writing. It’s probably the single most important rule in all of screenwriting that so many people get fucking wrong. So Gods of Egypt features scenes in a desert, a pyramid, a swap, outer space, river rapids, and a city that have no connection at all between each other.

Perhaps this all could have been forgiven if you had decent characters to follow, but the film lets you down in that area too. Horus and Bek are the worst mismatched duo to appear on screen since the Ambiguous Gay Duo, and at least those characters had a reason to be friends. Horus and Bek are continuously annoyed by each other’s presence and they have fuck all chemistry together. Granted, their attempted bromance is better than their respective love interests who have zero personality whatsoever. The only glimpse of character you get from any woman in this movie is “tits” and that’s it. Every goddamn frame a woman is on screen is squared perfectly on their chests because: 1) these actresses can’t fucking act; 2) they don’t serve any purpose to the plot aside from motivating the men; and 3)  something needs to hold the audience’s attention because nothing else in this movie bloody will.

None of the other big draws fare any better. Geoffery Rush is slumming it in this movie. I’d imagine the filmmakers had him for one single day, and rush to film all of his sequences. He has to fight a giant monster twice in this movie and he accomplishes the task the way a gardener chases a fucking gopher around his lawn. Gerard Butler is fucking atrocious in this movie, with his heavy Scottish accent permeating every damn line that comes out of his blubbering mouth. As the main antagonist, he has no fucking personality, no menace, no intrigue, no fucking anything. Just fucking useless.

What about the one Black actor with a speaking role? Chadwick Boseman, he’s your future Black Panther making his debut in Captain America: Civil War before he gets his own movie. I admit he has the best lines in the whole damn fiasco, mostly because he treats these useless ass characters with such disdain that I completely related to him. As Thoth, Egyptian god of mathematics and oratory, he’s perhaps the only character who matches up with his mythological counterpart well. It’s just such a shame we don’t spend too much time with him and he’s gets taken out in the lamest way imaginable.

Fucking hell, this movie is a goddamn mess. The whitewashing was bad enough, but to layer the atrocious writing, subpar acting, and insipid plot just makes this whole production a frustrating experience. A part of me is glad that no Black actors had to sully their names by featured in this movie, but the other part of me is completely frustrated why were unknowns cast in the main roles aside from Gerard Butler. All these other actors were absolutely useless so there was literally no reason any other race could have taken the roles.

Regardless, this movie fucking, fucking, fucking sucks. I had to drink so much whiskey to get through this mess and I say that with zero shame. And coming from Alex Proyas, a man BORN in Egypt, the direction is the final insult. This guy made The Crow and Dark City. But ever since then, he’s made one failure after another from I, Robot and Knowing. At one point, this guy wanted to make an adaptation of Paradise Lost starring Bradley Cooper as Lucifer. When the studio refused to provide him the budget he wanted, he dropped the idea and likely reconfigured some aspects of that script for this soggy diarrhea.

So fuck you Proyas, fuck the Hollywood machine that allows bullshit like this to happen, and…

9 thoughts on “Gods of Egypt Review”