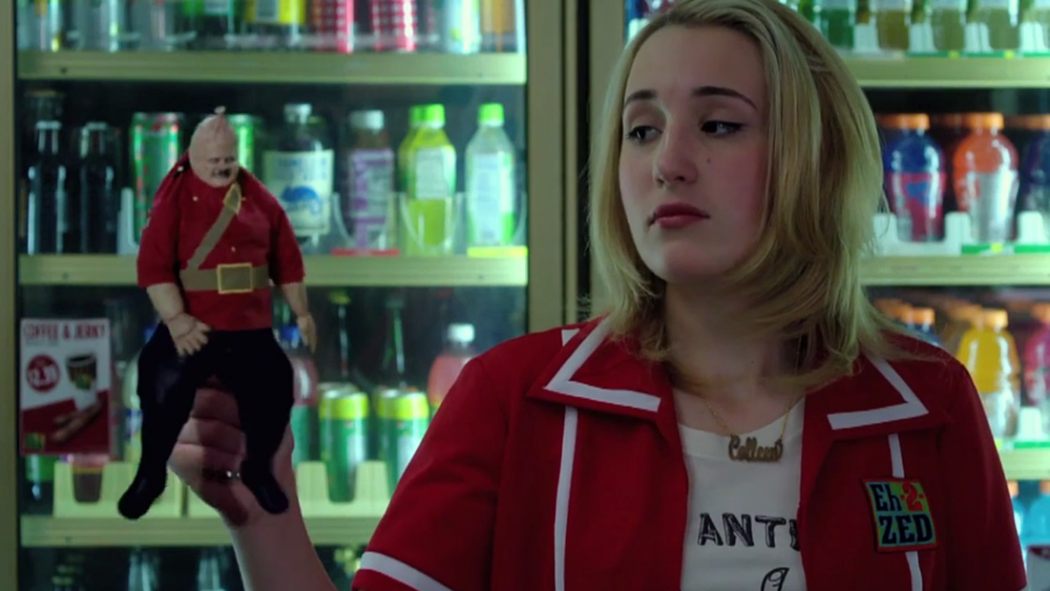 Oh how the mighty have fallen. Two decades ago, Kevin Smith was on top of the world. He had become a geek icon through Clerks and Mallrats, then became a critical darling with Chasing Amy, then capping off his odd universe with Jay and Silent Bob Strike Back. Then through the 2000s, Smith tried to reinvent himself with various productions that simply didn’t connect. Finally, he just gave up, cashed in on his rabid fan base and committed himself to shooting the shit with his friends on his “Smodcast” where he gets his new ideas for films like the execrable Tusk. But the director just couldn’t fucking help himself and he made yet another film. A film that will now go down for me as the worst film I have seen in 2016 so far. And given the unbelievable piles of shit that I have endured, that’s saying a goddamn lot.

I’m not giving you a plot synopsis…because Kevin Smith didn’t give a fuck, I’m not going to give a fuck. All you need to know that this is about two teenage girls both called Colleen played by Lily Rose Depp (Johnny Depp’s daughter) and Harley Quinn Smith (Kevin Smith’s daughter) dealing with a horde of talking, Nazi sausages (Bratzis) that enter people’s assholes and kill them from the inside…in Canada. Oh you think that’s fucking dumb? Stick around, I just got started. FYI, the actresses are BFFs in real life, which would explain why the fuck Johnny Depp is in this movie doing an atrocious French accent while wearing a face full of prosthetics.

God fucking damn it. I really don’t know where to begin with the nuclear explosion of Tyrannosaurus Rex shit. Do I start with the abysmal writing? The fucking idiotic characters? The fact that the only so called “jokes” in the movie are all making fun of how Canadians talk? Or the infuriating cameos? Smith’s crybaby routine that “critics are mean?” Let’s start with the story first and work our way from there, because you need to truly appreciate how fucking idiotic this movie is and why it fails as a film.

So the killer sausage plot point doesn’t even come into play until the latter half of the film; the first half is following the Colleen’s around in their high school lives working a shopping mart as the film stops fucking dead to give you an Instagram-esque profile picture and description of each and every goddamn character, bar fucking none, that appears in this 88 minute Japanese martyr torture. Some characters get this lavish introduction scene even if they appear once in this entire film. So when the film isn’t grating you with these annoying cutaways, it’s boring you to fucking death with bland, uninteresting dialogue between two high school sophomores where the only jokes they can possibly make is how Canadians talk funny…that’s it.

Now you’d think this is the part where I viciously insult baby Depp and Smith’s acting abilities…but I’m not going to. I mean, I will criticize their singing ability because my God, was these chicks can’t fucking sing. And they perform THREE goddamn songs in this bullshit. As far as acting goes, they’re not atrocious because the pair do have chemistry likely since they are friends in real life. But neither is emotionally invested in the scenes so you don’t give a shit what happens to either because Kevin Smith wrote the Colleens to be self-absorbed teenagers constantly checking their cell phones with every breath they take. It’s not remotely interesting, Kevin Smith has nothing interesting to say about cell phones in teenagers’ lives today, so you don’t give a fuck. Plus, I have the sinking feeling that several lines of dialogue were essentially ad libbed by the pair of girls because I strongly doubt Kevin Smith can write a decent character ever again for the rest of his fucking life.

No where is Smith’s writing abilities more apparent than when you come across Johnny Depp’s Guy LaPointe, a bumbling, incomprehensible French-accented private eye that returns from Smith’s previous film, Tusk. And I swear Kevin Smith took several minutes of Yoga Hosers to talk about how “amazing” the adventures in Tusk were. Now while I know some people actually like Tusk (Lord knows why), I’m sure even those fans can’t stomach this movie or Johnny Depp’s character. Take his most obnoxious roles from The Lone Ranger, Charlie and the Chocolate Factory, and Alice in Wonderland; mix them in a blender; drink the bloody decomposed waste deep; and you’ll get how fucking terrible Depp is sinking here. It’s like his failed audition for a Pink Panther reboot that thank sweet, merciful Christ never happened. I truly hope you understand how much I fucking despise this Depp for taking this role, and not just because he’s a spouse-abusing asshole (though that horrible fact certainly inspired me to take the gloves off).

But aside from Depp mugging the camera and making you pray for the sweet, cold embrace of death, you get several public figures dropping by when they should know goddamn better. Jonathan Taylor Thomas (remember his ass?) makes an appearance as a Canadian Nazi, and the only reason I know he’s in this is because he’s friends with Smith after his last appearance in Tusk where he played a completely different character. Incidentally, Justin Long also returns from Tusk, no longer the annoying podcaster who got turned into a hideously fake-looking walrus, but appears here as the Colleen’s yoga instructor, Yogi Bayer (get it? Because God knows Smith proceeds to drive that joke into the fucking ground).

Fucking Stan Lee appears out of nowhere, likely as payment for selling his soul to be honored for all the Marvel Cinematic Universe success. But the most offensive cameo of all was hidden deep in this movie, a reference that made my fucking blood boil with rage. Kevin Motherfucking Conroy stops by and even does his infamous Batman: The Animated Series voice. Don’t play that game, you know exactly what I’m referring to. He’s the quintessential Batman voice, better than Bale, Affleck, and Keaton combined. But Conroy’s slumming it here, likely out of pity as I imagine Kevin Smith has kissed his ass so many times that the man’s buttocks now has an imprint of Smith’s tiny mouth.

And while you’re contemplating that frightening imagery, let’s turn our attention to the main plot device of this desecrated corpse of a fetus: the Nazi sausages. Kevin Smith decided to voice and lend his appearance for these painfully fake looking monstrosities that speak only in common German words like “wunderbar” and “guttentag.” On screen, they look fucking terrible. It’s mind blowing to me that people on YouTube are coming up with better looking green screen effects than this garbage. And those YouTube people don’t have a $5 million budget to blow either…yes this movie seriously cost some poor sap in Hollywood five million American dollars. Pathetic, I know.

And what the fuck is the point of these sausages that crawl up people’s assholes and kills them? Apparently they were created by some Nazi scientist who’s using them to create a monster that will kill “mean” and “negative” critics of his artwork…fucking what? You had a dumb ass premise, Kevin Smith, and all you use it is to talk shit about critics again? Have you learned nothing at goddamn all from Shyamalan’s Lady in the Water?

The moronic premise could have been used to talk about something interesting. For fuck’s sake, I just saw a movie about talking food become an exploration into the concepts of the after life, religion, atheism, and the goddamn Iraeli-Palestinian conflict. Expecting a little something more from a guy who made interesting, thought provoking films like Chasing Amy and Dogma is not unreasonable.

You see, Kevin Smith, THAT’S why people hate your most recent work. It’s not out of jealousy or wanting to destroy every art work they come across; critics like myself WANT to see weird, unique visions come to life. We want to laugh, we want to be engaged, we want to think. And if you fail at all that, then at least put some fucking effort into it and give me something to recommend people to see your fucking movie.

But no, Kevin Smith acts like an entitled little brat who claims no one understands him. And you know what? He’s fucking right. No one, not critics, not fans of his, not general audiences, no fucking one is going to understand this miserable piece of shit of a film. It’s a waste of goddamn life that’s unfunny, shoddily produced, poorly written, and ultimately pointless. Two things makes this movie all the more frustrating: 1) the fact that he dragged his daughter and her best friend into this bullshit as some poor launch point for their acting careers and 2) I still fucking know Smith is a smart, witty guy. His speeches and his discussions about comics and films are still intriguing to listen to, but the man has no desire to ever produce a quality film. So fuck you, Kevin Smith, and…