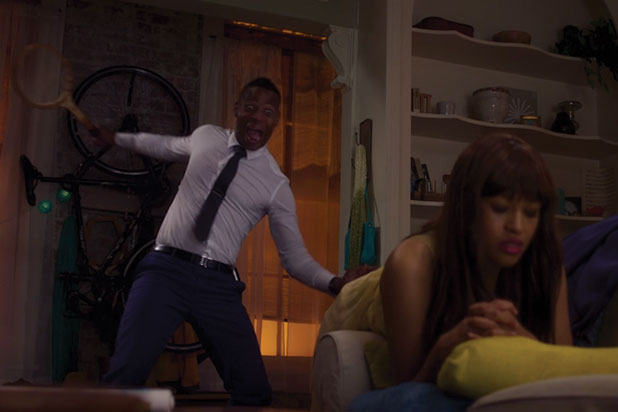 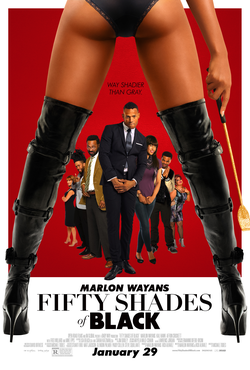 There is nothing left in me, but unholy rage. Today is a day that makes me curse reviewing movies. Because I want to review every goddamn movie that passes by theaters, I needed to pay attention to this worthless piece of fucking shit. My soul is dead inside now, and it’s all because of Marlon Fucking Wayan’s fault.

Fuck giving you a synopsis. You want one? Just read my Fifty Shades of Grey review and that’ll get you up to speed because this discharge of giraffe spunk is suppose to be a “spoof” of that unforgivable sin against God. A spoof is defined by Google to mean “a humorous imitation of something, typically a film or a particular genre of film, in which its characteristic features are exaggerated for comic effect.” But the key words, my dear children are “humorous” and “exaggerated,” because Fifty Shades of Black has nothing of the former and practically manages to ruin the latter.

Making fun of Fifty Shades is not fucking difficult. Everyone from me to Saturday Night Live to stand-up comedians have taken turns giving it a good old-fashioned spanking for being absolutely terrible. Hell, I fucking watched it again last night with my girlfriend because she wanted to experience it. And we had a great time drinking whiskey and shitting all over that garbage. But watching Fifty Shades of Black has now made me feel bad for E.L. James’ crap adaptation, because this Wayan’s tumor is somehow worse. And keep in fucking mind, I ranked Fifty Shades of Grey as the second worst film I saw in 2015.

There are no goddamn jokes in this so-called comedy. The vast majority of these alleged “jokes” are references. References to Magic Mike, Back to the Future, Donald Trump, Republicans , Rhonda Rousey, Soul Plane, Django Unchained, Kevin Hart, 12 Years a Slave, and yes Fifty Shades of Grey. But there’s nothing clever to the reference. It’s just presented in front of you like a dog licking his balls while you stare at the turd he dropped on your rug while you were gone. There’s nothing about the references either that even make sense in the context of whatever the fuck Marlon Wayans and his co-star, Kali Hawk, are doing. It’s just inserted with the subtlety of ramming a goat inside a refrigerator.

This is Family Guy type of shit. But whereas Family Guy occasionally, rarely, gets you with such a random, out-of-place gag; Marlon Wayans never fucking makes you laugh. Most of the time he just turns it into a excuse to take off his shirt. To the fucker’s credit, he’s got a great physique for a 43-year-old, but he is completely unable to deliver a simple fucking joke. Somehow this guy has gotten worse from his days in White Chicks and Littleman, which seem like fucking masterpieces compared to this come stain and his garbage A Haunted House duet.

Speaking of which, Black falls back on Marlon Wayans’ worse habits when it comes to race jokes. He doesn’t just go for low-hanging fruit, he just goes for infected, rotten fruits that aren’t even fucking funny. A character gets tazed and Wayans’ reaction is just “Black Lives Matter!” That’s fucking it. Doesn’t say anything else, just fucking spits out “Black Lives Matter” like a fucking parrot. And he kicks off this whole, stretched-out 92 minute Vine with a series of a Black dude robbing from white people randomly. Why would he show you this? “Because it’s ironic and funny!” Marlon Wayans would blubber as he pops out from his pillow fort where he writes this script with his own shit that’s being wiped by his mom. And he doesn’t fucking stop there. He basically puts on a straight up minstrel play that is somehow worse than fucking Soul Plane, one of the biggest insults to a race of all fucking time.

I’ll spoil the one fucking good joke in this whole torturous diarrhetic explosion: Wayans ties up the Anna Steele knockoff and reads the book of Fifty Shades of Grey while the Steele spoof forgets the safe word to avoid her torture. Laughed? Good, now you don’t have to see this piece of shit. Because couched in between this gag are just lazy physical gags involving a magician out of a fucking nowhere, or re-enact a fucking waterboarding scene from Zero Dark Thirty (forgot that was what he was making a gag of).

Fuck me. I’m in disbelief that I sat through this lobotomy. Five other people were in my theater besides my girlfriend and I. Four left before the first 20 minutes, the last dude woke the fuck up as we ran out of the damn theater screaming.

And it didn’t have to be this way. Fifty Shades of Grey is practically fucking easy to trash and make fun of. Hell just fucking watch the goddamn movie with a six pack and just talk shit throughout the ordeal and I guarantee you will have a much better experience than watching Fifty Shades of Black. Though interesting enough, he ends up copying whole lines from one of the worst film of 2015 to make cracks against it, and it’s here that you could almost see the potential for a great spoof. A tragedy of this spoof is that all the sets are near perfect recreations of Grey, right down to the lighting in certain locations. Hell, you could hear through the vomit a tiny critical voice pointing out what kind of a psychopath you have to be to do the things Christian Grey did.

But no, Marlon Wayans was never interested in skewering E.L. James’ fecal matter because he failed miserably to do so when he tried spoofing found-footage horror flicks in his execrable A Haunted House. Every. Fucking. Joke. Is. The. Same. Goddamn. Thing. “This is what white people do! And this is what black people do! Isn’t that funny?” When you’re doing the same GODDAMN thing over and over again, it fucking isn’t Wayans.

I’m fucking fuming at Marlon Wayans. Requiem for a Dream was over 15 fucking years ago. Marlon Wayans was a revelation in that haunting film. He demonstrated that he had the potential to carry on incredibly difficult roles. But he has chosen instead to make godawful comedies to pursue a cheap buck. But the joke’s on that asshole. His films have noticeably taken a dive in box office returns over the years, culminating in this bullshit. Wayans has only managed to eek out $6.19 million for his opening weekend after his last film managed to take in over $8 million. He’s out his way out the door, and I will not fucking miss him.

Fuck Marlon Wayans. Fuck the actors who agreed to be with him in the piece of shit, especially fuck-muthering Jane Seymour (Dr. Quinn, Medicine Woman) and damn-God Florence Henderson (Carol Brady). Fuck the people who still support Marlon Wayans. And last, but certainly not least…