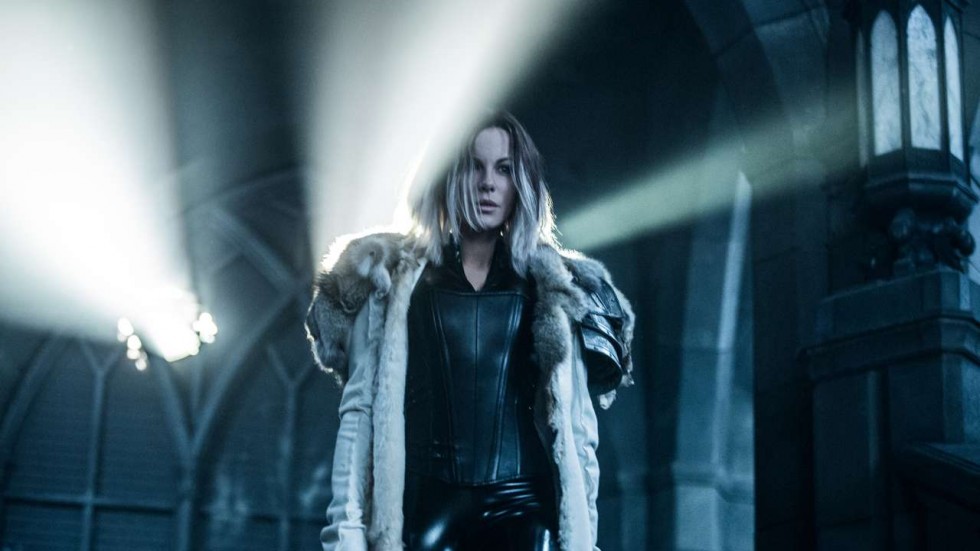 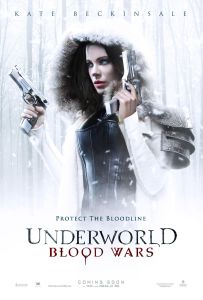 You know me, I appreciate film series that continue a story past just one film. From epic adventures like Star Wars and Lord of the Rings, to ridiculous fare like The Fast and Furious. And even if I don’t like a property, like bullshit YA adaptations and the clunky Transformers movies, I still am able to recognize why people would like those kinds of films. Which is why I’m puzzled by the Underworld series, I don’t hate the films but I just don’t get why people give so much of a shit about these boring messes aside from Kate Beckinsale’s butt in leather.

So Beckinsale is back as Selene the vampire death dealer (basically a vampiric soldier really good at killing people), as she continues her long journey to escape the war between vampires and werewolves (called Lycans in the series). Not only did she hook up with a half-vampire, half-werewolf hybrid but Selene also killed the leader of her coven when she found out he had betrayed her. Also, her hook up lead to the birth of her only daughter, a powerful hybrid who’s blood is so highly sought after by both the vampires and werewolves because it can give one side the power to tip the scales in their favor.

I’m giving you the Underworld info dump before getting into the plot of this film because you will be completely lost otherwise. Honestly, this movie is definitely not for newcomers to the series because everyone keeps referring to events that occurred in the previous films, the first of which goes back to 2003…I’ll give you a moment to let out a little cry as you realize that was 14 years ago. Now I’m not saying that sequels shouldn’t necessarily ignore their own continuity, it’s what brings fans back to the table after all; but I am saying that sequels should at least be accessible to fresh audiences to get them interested in the older films for context. The Marvel movies are great at pulling this stunt off, but Underworld: Blood Wars opts for a five minute word vomit for its an hour and a half movie so you won’t be completely lost as to what the fuck is going on. Not like it matters, because this film ends up becoming about the same damn thing as the previous films, save for Rise of the Lycans: everyone is in pursuit of the person with magic blood.

That’s your plot, all the vampires and werewolves are chasing Selene because her daughter has magic blood but here’s the punchline – you don’t even see the kid in the movie. That’s because Selene deliberately separated herself from her daughter to prevent anyone from tracking the young girl down. This isn’t a twist, this is told to you in the opening monotone narration delivered by Beckinsale as she recalls the days of her bootius maximus wrapped in the tightest leather. But that’s the thing, because the daughter NEVER appears in this film because of this deliberate decision in the last movie, you don’t give a fuck about the central story of this movie.

Actually, no one in this production seems to be giving an ounce of a fuck either. Beckinsale is as freaking lifeless in this movie as the living dead (ba-dum-tss). Her character says on multiple occasions throughout the movie that “she has lived too long” and it was honestly hard to tell if it wasn’t Beckinsale herself exasperatingly saying that. She does the bare amount of work in this movie, hell she doesn’t even bother with teasing her rear bongos as she did in her last three appearances. And Beckinsale packs the same blank eyed expression on her face from beginning to end in a likely effort to sabotage any attempt at a SIXTH film to let this story quietly die in the night.

Her co-stars don’t fare any better, the closest thing they could get to a big name is freaking Theo James from the abysmal and now defunct Divergent series. This non-acting motherfucker continues his pursuit of becoming the blandest young actor in our modern day now that Sam Worthington is off making decent films again. And yet he stood out to me more than one of the film’s main antagonist, Marius (played by Tobias Menzies). This dude didn’t even try to act, he just grunted everywhere and glared at his underlings who were acting better than him to convey that Marius was supposed to be intimidating.

Meanwhile the secondary antagonist, and by “secondary” I mean forgettable, was played by the same lady who played Irene Adler on Sherlock. I’ve got nothing more to say about her except that she’s really fucking bad in this. I know she was a bit over the top as Adler, but it turns out that’s just how this actress performs in every goddamn role. Granted she’s the only person excited to be here, so I’m able to forgive her in her brazen attempt to chew the scenery, if only she was in it longer. Oh yeah, and Charles Dance (Tywin Lannister himself) appears to cash a quick paycheck in a role to what amounts to a cameo before he finds a way out of the bloody movie. But hey, I’ll give points to the film for not shoehorning another forced love plot like they did in the first two films for someone to praise the bountiful bottom of Beckinsale (though I do find it amusing they wrote the love interest out of the story in the most embarrassing way imaginable).

So, if the story and acting is terrible, is there anything to salvage this mess? Well, the Underworld series did have decent action…I think. But not here, the action is overly reliant on computer generated effects that have not advanced since 2003. Seriously, the werewolf transformations are straight up lazy, I swear they repeated the same morphing animation over and over again because the filmmakers realized Beckinsale was too goddamn expensive. And the actual fist fights between humans have the Jason Bourne issue, of not knowing what the fuck is happening due to poor editing and camerawork. And I didn’t even raise how flat and boring the actual gunfights are between nondescript characters so you can’t tell which side is which.

Of course, the awfulness doesn’t get cranked up to 11 until the fights between the werewolves and humanoid characters. They have this weird quality from Blade II, where the human characters perform hyper-fast acrobatics that in no way looks cool or exciting. But keep in mind people, Guillermo del Toro’s turn with the greatest vampire hunter premiered in 2002, one year before the first Underworld and it somehow has aged better than these movies have. And for this film to STILL be using this slipshod effects are just freaking lazy.

Honestly, this is the worst kind of film to review because the movie is ultimately BORING. It’s not the insulting kind of bad like Fifty Shades of Black or the amusing kind of bad like Norm of the North, it just puts you to fucking sleep. And unfortunately, that’s a pretty damning statement against an action movie, predicated on thrills and excitement. But the confusing plot with the bland characters involving shit you don’t care about and bland, forgettable dialogue is just painful. And no amount of ass jokes can make this film any better.

Please God let this be the final nail in the coffin for this series, because as far as I’m concerned, this series has lost all goddamn steam and is 100% useless. If you’re a legit fan of this series, then check this out for a RENTAL; but for everyone else, this is…