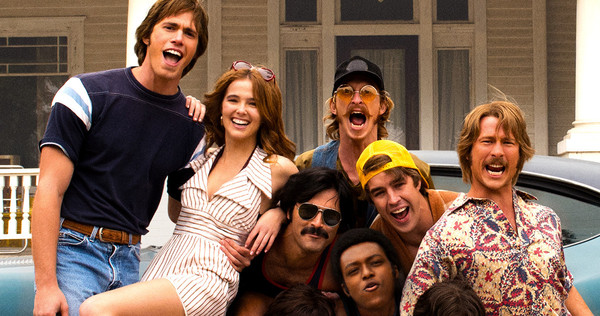 Dazed and Confused in the 80s

Dammit, I sometimes hate having a contentious opinion with some critics (not with Harry Potter fans though, it’s fun to poke them). Look, this movie is being heralded as “one of the best of year” and is appearing in a lot of early top ten lists for some critics. And while it’s by no means bad, I thought it was just kind of alright. These “ehhh” reviews usually aren’t very much fun, but when contrasted against certain people’s expectations of “GREATEST OF ALL TIME,” they can serve to be an interesting discussion of what’s truly an amazing film. Let’s dig in…

We mostly follow the exploits of a college baseball team in the 1980s getting to know each other in the last days of summer right before the school year starts. This involves them partying, trying to get laid, partying, trying to get laid, try some weed, partying, and…that’s about it really. I mean we have a main character in the form of Jake (Blake Jenner) who gets accustomed to his new surroundings, flirts with tons of girls but goes a little harder for one over the rest and pretty much serves as your de facto tour guide because you rarely leave his perspective. Does he change at all or learn something new? Nope. He’s pretty much a semi-lucky dude who’s talented in the beginning and pretty much stays the same til the closing credits.

So what the fuck is the point of following these college boys around? Well the good news is that they reveal a bit more dimension to each of themselves as the movie progresses. Bad news is that they don’t have an endpoint they’re working towards. The word that comes to mind in describing this movie is “coasting,” your characters are just cruising around doing whatever they please and you’re along for the ride. You’re having fun with them because they can be charming and even funny at times, but after two hours with them you have to ask, “so are we going anywhere in particular or are we just chilling?”

Story wise, this film’s a bit of a disappointment because there isn’t one. This is more of a slice of life for some jocks playing baseball and scoring chicks back in the mid-80s, and if you have zero interest in the life of these bros, then this film has really nothing for you. This is where my Dazed and Confused comparison in the subtitle becomes especially relevant, because this movie is pretty much the same teenage slice of life sequence of partying and pranks only set in a 1980s college as opposed to a 1970s high school. I should probably emphasize for those who don’t know that Richard Linklater directed both Dazed and Confused as well as Everybody Wants Some!! (God adding those exclamation points is screwing up my grammar rules).

I know some critics are calling this movie a “spiritual successor” to Linklater’s own masterpiece, but I don’t see that as a positive comparison. For one, Dazed and Confused actually was working towards an event (an end of the school year party) while you got to know various characters partying and pranking each other around town as they got set for the main event, which resolved several plot threads before everyone settled in for the summer. Everybody Wants Some!! on the other hand, focuses on the last week before school starts for a horde of bros and they all became interchangeable for me. It didn’t help they moved from party to party like a pack of dogs thirsty as motherfuckers. Is there any point to all tail-chasing? Do they choose to live a hedonistic and polyamorous lifestyle rather than pursue normative relationships while making a convincing argument for said lifestyle?

Fuck no. It’s all set up for a bunch of gags involving drinking, sex, and innuendo while the dudes make fun of each other’s sexual prowess. Now you might be thinking I’m asking for too much from this film…and that’s because I bloody well am for a movie that’s decked the halls of several critical top ten lists. Seriously, I do not understand why the fuck is this movie being heralded as the Second Coming of Jesus Dalai Lama Christ. It’s just a solid comedy with some pretty decently well rounded characters, but that’s all it is.

And that’s perfectly fine. Look, the jokes are indeed funny and I mentioned how multi-dimensional the characters can get in such a short amount of time. What I mean, is that you learn for all the swagger some of these guys have, they do have a code (a bro code if you will) about not being a raging, entitled douchebag. And it’s at least comforting that these guys do recognize that and even impart such a lesson the hard way to one particular member of the baseball team. But aside from this great moment, the movie never elevates above that because you don’t have a lick of drama to be found anywhere. I gave Fences a glowing review because I was highly impressed by the performances of extremely solid actors as they portrayed some pretty impactful drama with highly flawed characters while even relaying some hard life lessons about humanity. Everybody Wants Some!! is missing all of that.

I could only tell the dudes apart by the color of their skin and their facial hair alone. I didn’t bother learning any of their names, their motivations, or their insecurities save for the one we were first introduced to; all of which get discussed in the brief snipets you get to see them. Hell, I didn’t even bother listing the other actors’ names for this review because I could honestly not recall which thespian portrayed each character. No one left a major impact on me and that’s ultimately what brings the film down for me.

Still, the writing and situational comedy are quite enjoyable; and you do learn to enjoy the company of this cast even if their introductions may turn you off. Think of them as a group of great party animals that liven up the festivities for a brief few hours and you forget all their names the following morning as your nursing your bad hangover from the night before. You know you had fun, you just didn’t care to learn anything more about them as you went on with your life.

So with that, I’ll give this film a low…

4 thoughts on “Everybody Wants Some!! Review”