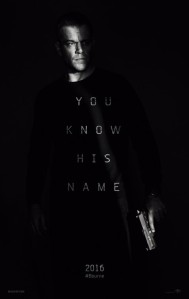 So Jason Bourne has been living off the grid for the past decade after his adventures in The Bourne Ultimatum, when Nicky (Julia Stiles) returns to his life to let him know that he indeed hasn’t remembered everything. In fact, his dad was apparently responsible for the program that created him. Of course, Nicky only got this information while she was hacking the CIA to uncover their latest and greatest Black Ops program, which puts her and Bourne in the US Government’s crosshairs. Tommy Lee Jones as the new CIA director and Alicia Vikander as the head of the CIA’s cyber ops have Nicky killed, thus setting a chain of events more improbable than the last shitty James Bond movie.

If you’ve never seen a Jason Bourne film, then perhaps you’ll be surprised by the plot twists but I doubt it will captivate your interest since the film’s script, acting, and directing do its best to bore the ever living shit out of you. But before I slag them off, I need to rag on the plot just a little more, because it is absolute cold diarrhea refried on a paper plate.  Jason Bourne takes separate plot details from the first three movies (not the fourth, because honestly, who the fuck remembers Jeremy Renner in The Bourne Legacy), and mashes them together to give you more of the same shit you saw before.

You have the super assassin out to kill Bourne like they did in each freaking movie, played here by Vincent Cassell. You also have a “new” black ops program being built from the remains of Jason Bourne’s original program like in Ultimatum. You have Bourne sifting through his recently-recalled memories like in Identity and Supremacy. And of course, you have the insider at the CIA who wants things to change in the spy industry as in Supremacy and Ultimatum. Is there a car chase that caps everything off in the end just like in Supremacy and Ultimatum? You bet your sweet ass there is.

Now, remaking certain scenes from previous adventures isn’t necessarily a terrible idea, but you have to give your audience something, anything new as in Star Wars: The Force Awakens. For the seventh installment, you had brand new characters with fleshed out goals, personalities, flaws and challenges being put through similar situations as before, but their reactions based on their characteristics make for compelling viewing. For Jason Bourne, you’re given jack shit. Matt Damon’s character is a freaking flat line from beginning to end; he doesn’t change, he doesn’t grow and nothing in his life has been altered for the better or even the worst. The events of this movie were essentially a distraction from his life of making money in illegal fighting rings before he fucks off to the ether.

Not even the world around him changes. It would at least give the movie something to turn Bourne into this force of nature that the CIA or other government and private entities have to deal with as he messes with their toys. But no, all we get is some vague plot involving social media that felt crowbarred in when the filmmakers realized “Jason Bourne remembering his dad” adds nothing to the character, the franchise or even the world surrounding them so they had to raise the stakes some-fucking-how.

What kills this movie’s interest further is that we’re provided an ensemble cast sleepwalking through their performances. Of note was Tommy Lee Jones, who sat on his ass for a good portion of this film literally phoning in his performance by acting in a Bourne movie’s favorite location, computer rooms with maps and surveillance equipment. He’s absolutely dull here, and doesn’t even make for an interesting villain the way Chris Cooper or Brian Cox in the first two films.

However, his boredom with the material pales in comparison to that of Alicia Vikander, who I swear must have been reprising her robotic nature from Ex Machina. However, I reread my review and remembered that her style came more from trying to emulate human emotion rather than simply trying to be a robot. So that’s when I realized that she was likely being directed to do that by Paul Greengrass because he forced Julia Stiles do the exact same shit. And it didn’t make any sense there either, because I remember showing plenty of emotion in her interactions with Matt Damon during Ultimatum, whereas in this movie, she speaks her line in this awkward stilted style that launched me out of the bloody film.

Hell, Matt Damon may as well be going for a little snooze in every scene he’s in. He has significantly less lines for this outing while keeping up a monotone voice that doesn’t even fit him after we last saw his character nearly a decade ago. Not even his action scenes pack any feeling, but they may have more to do with Greengrass’ awful shaky cam nonsense.

I know everyone thought it was groundbreaking in the first few years of the 2000s, but the camera work cheats you out of seeing anything remotely cool as the camera wobbles up and down, side-to-side like the dude holding it is drunk as hell. Every fist fight save for the last one is poorly shot, poorly edited to do its best to prevent you from figuring out what the hell is happening. The only breath of life this entire movie has is a car chase during the end in Las Vegas that still manages to go on way longer than it should. Damon and Cassell drive a Camaro and SWAT van respectively as they pursue each other through the Strip, destroying nearly everything in their path (but somehow their vehicles keep going until the film contrives a way for them to stop).

Contrivance really is the word of the day here. Because everything from character motivations to plot development to action scenes feel forced. Nothing gels and nothing feels like a natural development. It’s as if Greengrass and the screenwriter were told to include specific scenes in specific locations, and they tailor made (poorly) a film that had all of it. All with the passion of a toll booth operator handing out change to each driver.

Nothing in this film felt inspired, nobody involved in the production gave a shit they were making a spy movie, and no summer movie has managed to bore me to sleep the way this film almost succeeded. I didn’t let it beat me, but I don’t think I won anything of importance.

If pressed for positives, I’ll admit it was nice to see a spy franchise use a woman for more than a romantic interest and attempt to give her an interesting perspective while operating in the CIA. But Vikander is not given nearly enough to save this movie from absolute mediocrity. And since that’s the best I could do, with nothing of interest to hold me in any of the characters, story, action sequences or even developments in the franchise itself, I have to give this…