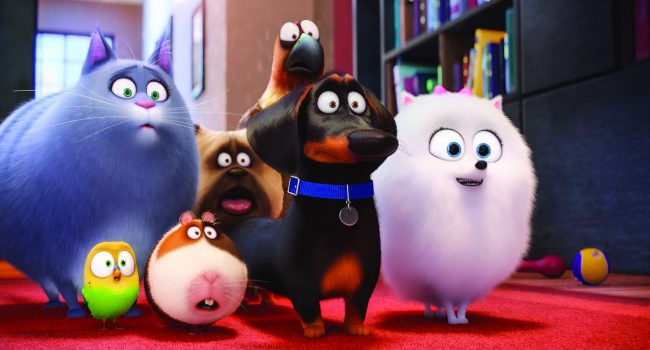 “Imitation is the sincerest form of flattery” some ridiculously jaded film critics will say when talking about details they recognize from other movies. This usually comes up with our dear friend Quentin Tarantino, who takes whole scenes from really obscure films and recreates them for his “bold” storytelling. But it’s usually meant as a compliment for him and an insult towards other people who do the exact same shit  (see people getting stuffy about the references made by Netflix’s Stranger Things). For me, imitation comes down as good or bad depending on how well a film can use the thing they’re copying for something else. Sometimes this works fine, and other times (most of the time) it doesn’t. So why am I bringing this up for a cartoon movie from the guys who brought you (the shitty) Minions? Well, stop me if the following sounds familiar…

You have a dog named Max (Louis CK) living a wonderful life with his owner in New York City. Then his life is upended by his owner’s introduction of a big, new dog named Duke (Eric Stonestreet). The duo come to blows for the attention of their owner, but wind up getting lost from home due to their shenanigans. A group of pets that are friends of Max (played by the voices of Jenny Slate, Lake Bell, Dana Carvey, and Albert Brooks) set out into the city to search for their lost friend, while Duke and Max learn to get along. Also the duo runs afoul a group of abandoned pets led by a bunny named Snowball (Kevin Hart) who reject owners and seek a life away from humans. Hilarity ensues.

Still not ringing a bell? Just replace my references to pets with references to toys, and you the first two parts of the Toy Story trilogy. Yeah, you can petty much see where every story beat is going by using Pixar’s scripts in your head. Still, just because the movie uses a similar story structure of a very well known film is not reason enough alone to slag it off. If it uses the story to tell a fun adventure with similarly interesting characters, then the film can still succeed. So how does The Secret Life of Pets fare? Pretty well with some characters…and not so well with others.

Gidget (Jenny Slate) is the dog that takes the lead to rescue Max, and she’s fun to be around. She goes from cutesy to violently psychotic on the flip of a dime, and it’s a treat to watch her flip the fuck out on other pets. Particularly because she has an unrequited love of Max…but that’s a weakness of the film at the same time. You’re barely given any time with Max and Gidget, she is clearly into Max but he barely recognizes her presence most of the time until the very end of the movie. So her journey seems a little quaint at best and stalkerish at worst. Yeah I’m calling a cartoon character a stalker, might as well call out shitty messages being slipped into your kids before you have to deal with the negative consequences later on as their worldview was shaped by these cute dogs. Call me paranoid all you want, there’s a reason plenty of women out there blame Disney and their princess movies for their poor outlook on dating.

Some of Max’s other friends aren’t given nearly as much screen time as Gidget, so they’re more like forgettable background characters. Which is a shame, because Toy Story had a fun cast of side characters like the Potato Heads, the aliens, Rex, Bullseye, Slinky and Hamm (shit I just remembered all those names from pure memory, and they didn’t nearly have as much development as Buzz, Woody and Jessie). The only other standout in the team of friends is Tiberius, played by Albert Brooks. Which was funny to me because I couldn’t recognize his voice compared to his turn in Finding Dory. But he’s got a few fun moments to make you chuckle, and distract you on your busy day.

You also have Snowball, an antagonistic character that provides the largest divergence from the Toy Story formula. Kevin Hart plays him in a manic, excitable fashion that shocks the film to life in a way that I could appreciate. Granted, he’s basically doing his usual shtick to be as loud and obnoxious as usual, but in a film with two boring leads (more on that in a bit), he’s a neat way to get your interest back into the movie. And unlike the miserable Ride Along 2, his scenes are short enough for you not to get annoyed so easily.

But all this talk about the supporting cast and I haven’t even brought up the two main characters, Max and Duke. Trouble is that they do not have a whole lot of interesting things to say or do compared to their costars…and they are the catalyst for the movie’s plot. I think the biggest issue is that their dilemma is so similar to Buzz and Woody’s original beef, but worse is the fact that The Secret Life of Pets does nothing new or interesting with the dynamic. Look Buzz and Woody doubled as father figures to their owner, Andy (who’s real father was noticeably absent in the events of all three films). It’s not merely being loved as Andy’s favorite toy that drives the plot and Woody’s own character arc, but the fact that both toys recognize they mean something important to a little boy’s life that inspires them to go to distance for him and each other.

Max and Duke have…none of that. They’re mostly just territorial dogs screwing with each other initially, but are forced to work together in order to survive. They have a “moment” towards the end when Max tries to find Duke’s former master, but this emotional scene felt flat for me. It didn’t do anything to move me or wish for a better resolution, I just felt nothing. There’s nothing deeper to parse through, there’s nothing unique or fun about their relationship. This is just purely bland.

And therein lies the film’s ultimate weakness: it’s really nothing special. It’s got a few funny gags here and there, with some fun cute characters bit it’s got nothing else to show. Everything you see here has been done and done way better with a shit ton more to say. But even with that harsh critique, I will openly admit that the film does have its charms and I get why some kids will connect more to this movie than I did. Hell, watching this in a theater may get you more excited than seeing it on Netflix or Redbox, but I wouldn’t call this a run out and see this sort of a film. So I’ll give it a very low…

4 thoughts on “The Secret Life of Pets Review”