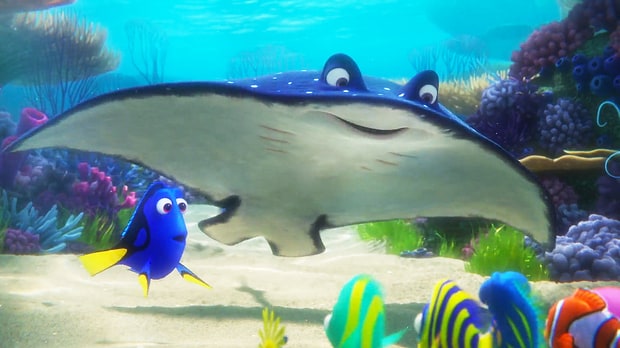 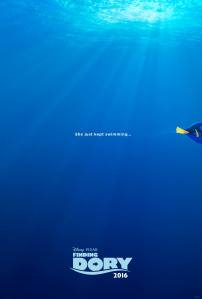 Pixar is one of the few companies that has to walk a tightrope every time it puts a movie out. Each successful movie has to up the game of the next movie, otherwise audiences start feeling like the studio is “losing its touch.” Sometimes they whip up brilliance like Inside Out, Up, and Toy Story 3; sometimes they make forgettable fluff like Monsters University and The Good Dinosaur; and then they make really awful flicks like Cars 2. So a sequel to the classic Finding Nemo could go either way honestly. Does it compare well or does it stand out on its own? Read on…

We start with Dory as a baby (clinically designed to be the most adorable thing ever animated) as she learns from her parents how to cope with her short term memory loss before cutting to an extremely depressing montage of how she lost her family and wound up on the other side of the ocean to run into Marlin the Clown Fish at the beginning of Finding Nemo. The film jumps to a year later with Dory, Marlin and Nemo living their lives together as best as they can before Dory suddenly has a flashback to recalling she lost her parents. Now determined to find them, Dory gets help from Marlin and Nemo (they do owe her majorly from the last movie after all) to get to a “catch and release” aquarium to treat injured aquatic animals. Hilarity, inevitably, ensues.

Pardon the dry quip, because I really did enjoy the comedy for this movie. It’s charming but not really gut-bustingly funny, yet it still manages to entertain for the hour and a half run time. I’m getting this out of the way now because I want to talk about the fundamentals for this movie. I was praying we wouldn’t get a retread of the previous film by having Nemo and Dory switch places, and thankfully that’s not the case here. Instead…well, if you can imagine that Finding Nemo was Taken with fish, Finding Dory is Memento with fish. And I intend every amount of edge Christopher Nolan’s piece implies.

Finding Dory is a surprisingly dark film because Dory’s coping with her mental disability becomes the theme and plot of the entire movie. Which in turn makes you feel bad for laughing at Dory in the last movie as this film shows just how bad Dory’s affliction had affected her and other characters’ lives. Then the emotional whirlwind gets kicked into overdrive as Dory is frequently forced to go on her journey alone and her disability becomes that much more frustrating (from a progression point of view).

Thankfully she’s not alone all the time, but your then reminded of the main theme of dealing with a disability. Nearly every voiced character encountered by the original trio has some form of physical or mental handicap ranging from short-sightedness to retardation to freaking PTSD and limb-missing. The latter two points comes to us through the character of Hank, an octopus missing a whole arm, who happens to be voiced by Ed O’Neil.

I have to say I truly loved this character, partly because he’s such a curmudgeon dick head through a large part of this film and partly because he gets the best animated scenes in the film. His camouflage ability is some straight up cartoon shit, but it allows the animators to become very inventive with perspective and color. His erratic, stealthy movements also compliment him as well as he deals with Dory’s memory problems that gets him into more trouble as the film goes on. Dory and him truly forge an interesting relationship that I genuinely dug thanks to the chemistry between O’Neil and Ellen DeGeneres.

Which makes Marlin and Nemo kind of hangers-on really. Look, both characters went through major arcs in the last film because the previous installment was a perfectly contained storyline. Their addition here is quite noticeable as they’re roles are inversed from the last movie. Here Dory is the main protagonist while Marlin and Nemo get to be the comic relief. The trouble is…they’re just not very comical. Marlin was and still is a straight man, while Nemo is still the adventurous kid. Neither one of these personalities lends themselves to decent comedy.

But wait, didn’t I say this film was funny? Very much so, it just comes mostly from Dory running into various fish at this aquarium. Although it does make taking seriously the underlying drama a little harder, I still enjoyed what the film had to offer.

A lot of people I’ve talked to over the past few days have reiterated to me that they liked this film fine, but they felt Finding Nemo was better. While it’s not an unreasonable comparison, these are two very different stories focusing on two very different characters, so I’m really not down to make a compare and contrast analysis. I’d rather judge Finding Dory on its own merits.

And by its own merits, it’s a fine film. Doesn’t obtain Pixar perfection like Inside Out but I can easily recommend this movie over a lot of animated films this year. What really holds the film back from the upper tier of animated features is Dory herself honestly, and that mostly comes from my impressions of her in the last film. In Finding Nemo, Dory was a klutz that gave Marlin’s worrisome father-schtick something to bounce off of and create genuine comedy. Following a goofy character as your main protagonist can get a little off putting, especially when what makes her funny is also what makes her tragic. You feel bad for laughing at Dory later on in the film when she’s confronted with harsh realities, which makes the effects of her disability all the more hard-hitting. The disconnect definitely made me feel uncomfortable, but then again that may be the point.

But what I will be more critical of is the progression of this tale. Nothing really surprised me here unlike in other films that made me feel genuine concern for characters when they were in dangerous situations. I never really got that whenever Dory, Marlin and Nemo were confronted with major dangers either. Perhaps it didn’t help that the stakes weren’t very high. Like I said, they’re in an aquarium that institutes a catch and release policy, so the humans hardly seem threatening. Hell, most characters tell our main protagonists to not worry so much. So if our heroes aren’t worried, them why the hell should we be?

The story is a bit of a disappointment on that end, but I can safely say I was still entertained by the comedy on display as well as the gorgeous animation techniques. Once again, Pixar manages to one up themselves in this department compared to their imaginative Inside Out and I walked away impressed by their style, use of color and environments.

Still plenty to dig in this movie, so I’m going to give this an enthusiastic…