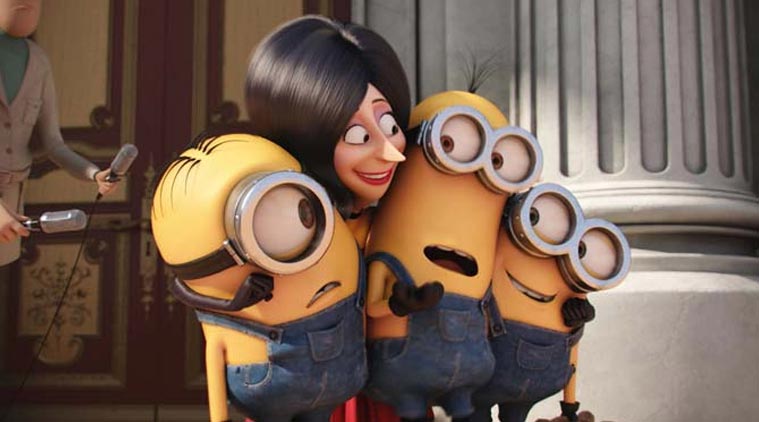 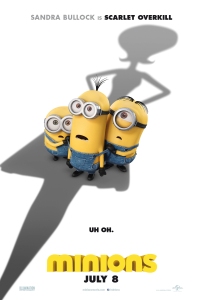 There’s running a joke into the ground. There’s beating a dead horse. And then there’s Universal Pictures with their Despicable Me franchise…oh sorry said that wrong, I mean those damn little Minions. I honestly don’t know why in hell people are obsessed with a bunch of yellow testicles speaking in Spanish gibberish. Okay, I’m not proud to admit I enjoyed the Despicable Me films and found a few chuckles in this new entry…but not as much as I want from a film.

We come to learn of the origins of Gru’s minions as having been around since the age of dinosaurs as desiring to serve the most evil entity in history. Why they conveniently leave out serving someone like Hitler is left to the audience’s imagination. Regardless after screwing up their last job, the creatures seclude themselves in the middle of a frozen tundra until they’ve become despondent over not serving a master for several years. This leads to Kevin, Stuart, and Bob setting out in the world to discover a new master to serve.

The beginning was probably the strongest part of the movie, as the jokes are lightning quick and are packed with energy. But the film slows down after that beginning until they encounter other villains including the baddest of them all, Scarlet Overkill (Sandra Bullock). And then….hijinks with characters you don’t understand ensue.

The jokes in Minions are really sight gags, that are fine in little bursts like an Internet short or the little asides in the Despicable Me movies. But when you base your movie ALL around that? It’s kind of a mess. Not helped at all by the fact you don’t give a shit about the Minions and their end game, because the film doesn’t give you a reason to. I know they look “cute,” but being adorable isn’t a reason to care about a character.

Not helping is that the three main Minions we follow have completely interchangeable personalities and appearances, so you care even less. All you have are the big stars in the movie like Sandra Bullock. And while she excels in comedies more than she does at dramas, she needs a script. And she can’t do shit with a script that tells her to act “crazy.” Don’t get me wrong, she does fine with what’s she’s given, but much like Jon Hamm and Michael Keaton, their appearances are far too short to be really enjoyable.

Before you tell me I shouldn’t expect much from a kid’s movie with characters that barely speak English, that’s a bullshit attitude to have. Because I clearly remember when Wall-E charmed audiences and made them cry (myself included). So at the very least I could get an entertaining experience at the theater.

Nonetheless, I had a few chuckles but their too spread out. This film really isn’t worth a trip to the theater, but definitely as a strong…