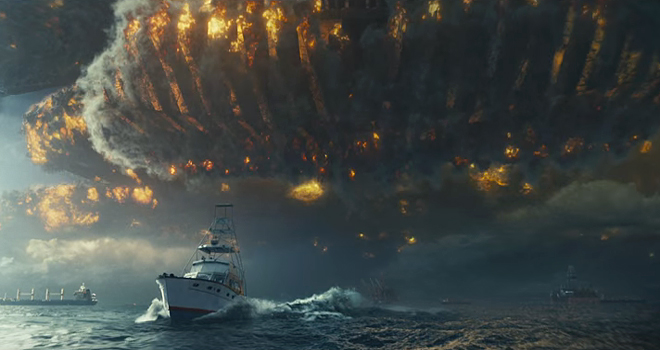 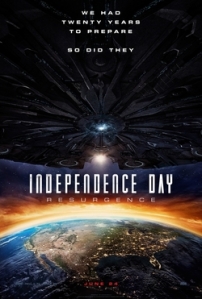 There are some movies that are, simply put, lightning in a bottle. Films that come out at just the right time, with the right cast, and perfect script with direction. The first Independence Day is one such film. Critics initially dismissed the movie when it came out, but it was a box office success at the time and, more surprisingly, became a fixture for America’s Independence Day weekend ever since. There’s tons of reasons why that movie works so well, and I’d imagine it’s why people were hellbent on making a sequel. Twenty years later, it’s now on our doorstep…and I’m here to tell you to kick it back out.

So after humanity fended off the extraterrestrial invasion in the last movie, the world has pillaged the desecrated spaceships and has advanced their military technology by half a century (or generic sci-fi tech) as they prepare for whenever the aliens decide to return. But before this occurs, we have President Whitmore (Bill Pullman) as he gets more and more visions of the aliens planning to take their revenge and Director David Levinson (Jeff Goldblum) investigating reactivation of alien technology that’s been dormant for two decades. Meanwhile, we switch to the son of Will Smith (noticeably absent) and the daughter of President Whitmore, Patricia,  reconnecting and both dealing with the fact that Patrica’s fiance, Liam Hemsworth (hell no I’m not giving you his character’s bland name), almost killed the dude years before. Finally, the aliens return…and you pretty much get a repeat of the last movie only bigger (and way more dumber).

That’s not comedic writing folks, this movie literally copies the plot points of the last movie, scene for fucking scene. For Independence Day: Rework, we have an alien mother ship arrives, destroys a bunch of landmarks, humanity mounts a counter attack, counter attack fails, a Deus Ex Machina appears that can save the day, and the humans execute a simplistic plan that somehow works along with an important character sacrificing themselves. Credits. That’s fucking it. Worse, whole scenes from the first are replicated without a hint of irony to them. You have someone being used by an alien as a mouthpiece where the humans learn of the aliens’ plan (complete with fog inside a contained space); and you have the President give a stirring speech to people around the world…except that you don’t give a shit that William Fichtner is giving you the spiel.

Independence Day: Repeat is a straight up remake of the original film with cleaned up special effects and somehow lacking any of the characters and heart that made the first movie a classic. Yes, I am unironically calling Independence Day a classic. It’s a film that took the concept of an alien invasion and wrote it in the way you would make a disaster film (not surprising given Roland Emmerich’s penchant for natural disasters obliterating landmarks). What this allows is being able to focus on an ensemble cast at different places in their world as they each deal with the fallout from the disaster in their own way. All of them converging at the climax for one last stand that will define them.

But you noticed the phrase “one last stand”? It’s only special if it’s truly a last stand; that is, it’s magic trick you can only do once. When you make the exact same thing, suddenly you’re poking holes in how fucking dumb everything is, especially here for Independence Day: Redial. From the character decisions to the aliens’ plan to the humans’ counterattack, you can find something utterly idiotic to pick on. And granted, the first film had its fair share of goofy decisions, but they were made up because you had well-developed and charismatic characters to follow.

Hell, the first film turned Will Smith into a blockbuster star once upon a time with his pitch perfect delivery of clever quips while dealing with the aliens. Jeff Goldblum was a bumbling stuttering mess that dealt with realistic romantic tension with one character and a sibling-esque rivalry with the President. And of course, you had Bill Pullman delivering one of the most iconic movie speeches of all time, that cemented itself in the hearts of an entire generation of film audiences.

For Independence Day: Regrettable, Bill Pullman isn’t a major character until the very end of the film even as he tries  to deliver yet another speech to inspire the masses (actually he did two, and neither stirred the eagles). Goldblum’s far more involved this time around but he’s also far more competent than he was in the last movie, lacking any character flaws that would have made him relatable. And of course, Will Smith isn’t around and instead we have a few young actors and actresses to try to take the role of breakout thespian. There was just one tiny problem: not goddamn one of them has even a fifth as charismatic as Will Smith was.

Liam Hemsworth gets more screen time than the others, but he’s nowhere close to being as charming as Will Smith or even his brother as Thor. Liam is just so bland and milquetoast that I can’t connect with him even as he pulls the “hot shot who doesn’t play by the rules” act that’s been played a dozen times better by much more talented actors. None of the other young actors fare any better, Jessie Usher plays the son of Will Smith’s character (thank God they didn’t hire Jaden Smith) and he’s no where near as boisterous or as clever as his character’s father.

Grace Huang is a young Chinese actress who looked she was going to play a significant role in this movie (gotta get that China box office after all), but even then she’s used as the object of affection for a creepy “nice guy” white boy who comes on to her so pathetically and so ineptly that it was baffling when she returned affections for his no-game ass. Maika Monroe plays as Bill Pullman’s daughter, and she too is just a trophy for her fiance (played by Hemsworth) to get back to even though she’s just as an accomplished fighter pilot as he is. What’s even more unfortunate is that she offers to make a big risky move to save humanity, only for the part to be taken by another guy.

Actually, come to think of it, NONE of the women characters fare very well in this movie. If you’re not one of the fighter pilots and you’re a lady, you’d be dead. That’s a bit of a spoiler, but in a movie that was literally repeating everything it did in the last film, then there’s very little room to be surprised about anything at all.

Really, the only noticeable improvement between the original movie and Independence Day: Refracted is that the special effects have improved…slightly. In an age where we have Marvel and Star Wars flicks on a regular basis along with more ridiculous fare like Transformers, these kinds of films just aren’t special anymore. There is no amount of rendering or graphics that can make a film stand out any more, when you can see other movies that offer the same thrilling fare with much better characters and more imaginative stories.

What’s even dumber is that the Independence Day: Reject offers a unique idea that could have made for an interesting story and also paved the way for some great action: it was revealed that one of the spaceships in the last movie had landed in Africa and started drilling into the ground, forcing the local population to take whatever was handy and fend off the attackers in hand-to-hand combat. THAT would have been bad ass to see, it would have been interesting and cool. But no, we just had to have another fucking space battle, so this cool idea was pissed away into the wind.

When a summer blockbuster lacks relatable or interesting characters that you can root for or an intriguing plot, then the movie falls apart and fails to engage anyone. Movies need to provide you a reason to give a shit, or it will fade into the annals of mediocrity, only coming to resurface every now and again when someone drops the name. And when I think of July 4th weekend here in the United States, I will continue to think of the original Independence Day with fondness and flip through the channels to catch the last hour of it at least. But I will never once think of Resurgence again because it commits the most damning sin of an action movie: it’s boring. It’s just giving you the same old shit you saw before only lacking any of the uniqueness that made it special.

For those reasons, I was content to have just given this move a RENTAL…but then the movie chose the biggest “Fuck You” of an ending I had not seen since goddamn Remember Me (a film, I’ll remind you, that ends with one of two lovers dying in the World Trade Center attack on 9/11…as a twist). Spoiler warning for those of you who a give shit, so scroll down towards the end after the following picture if you want my final rating. For everybody else, let’s take the plunge.

So yeah, it’s revealed that another alien species got wiped out by the same aliens that attacked humanity in these two movies, so these good aliens went to Earth to forge an alliance on a new home planet with other alien refugees that have had their planets eradicated by the same oppressing force. Honestly, there was a core of a great idea in this plot point that could have expanded to give a satisfying sequel to the original twenty years later. But no, we’re instead told at the very end of the film, that these aliens want humanity to lead all these refugees to take the fight back to evil aliens’ homeworld and stop them.

Question: WHY THE FUCK DIDN’T YOU MAKE THAT THE PLOT OF RESURGENCE? God damn it Emmerich, you give us a two hour tease for a cool concept that might not even get off the freaking ground because you wasted too much time planning this forgettable piece of crap? Are you for fucking real? This minute long reveal, after enduring two hours of passionless destruction, was the straw that broke my damn back and threw me into a profanity-laden tirade as I exited the theater.

So no, Roland Emmerich, I don’t want another goddamn Independence Day, because I’m afraid you’re going to give as much of a shit about this third film as you did in this wet blanket. This movie was a waste of time and money, one that will be skipped forever and ever and only remembered as the one bad thing to come out of Independence Day for years to come. For its attempt to sabotage a classic, I’m giving this a very, VERY low…