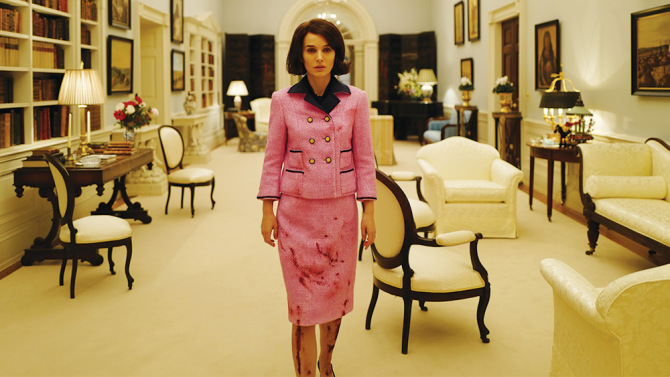 What is it about the Kennedy Family that fascinates people the world over? I know the last US President to be assassinated was John F. Kennedy, but why are people so interested in talking about what he could have done as opposed to what he did do. True the Cuban Missile Crisis put JFK on the map for world history, but people are hung up on the rest of the family including and especially Jackie Kennedy. And now we have the, by my counts, eighteenth serious depiction of the infamous First Wife this time portrayed by Natalie Portman.

Set some time after her husband’s assassination, Jackie Kennedy is recounting to Theodore H. White (Billy Crudup) how she felt in the first week after JFK’s head was blown away. The narrative is told disjointedly between Jackie preparing her first televised tour of the White House, riding in the car holding on to the President’s lifeless body, planning the funeral for her husband and speaking to a priest before she layed their two children that passed before the assassination next to JFK’s body. If you’re wondering how do they tie all of these events together, the answer is: very poorly.

Now keep in mind, I’m not a stickler for traditional narrative rules, I mean Eternal Sunshine of the Spotless Mind, Memento, The Prestige, and recently Arrival all rely on irregular plots to tell their stories and all of those are great, memorable movies. My issue with Jackie is that the events seem to be recalled by Mrs. Kennedy in whatever random order she was recalling the events of her life to her interviewer. There’s really no reason for the disjointed narrative and it ultimately serves no purpose but to say “look at me, I’m doing some avant garde shit.” But telling a story out of the order needs to be done for a reason, and it has to be for something besides reflecting the confusion of what the characters must be experiencing.

I’ll give an example, The Prestige starts with Christian Bale being accused of murdering Hugh Jackman in the first two minutes of the film. To figure out how he got there, Bale begins to read Jackman’s diary who goes back to the beginning of the rivalry between Bale and Jackman. Jackman’s diary also reflects his own efforts to decrypt Bale’s own journal demonstrating the rivalry from Bale’s perspective. While jarring at first, the narratives are providing two men’s perspectives of each other for events they both went through while also setting up the dramatic twists at the end of the film. Arrival does this as well only even more simply with an equally surprising twist. But my point is that the atypical narrative style served a purpose for these films. A jumbled narrative in Jackie serves no purpose whatsoever.

What you have instead are a series of well shot, well acted scenes that lack tension, drive, or interest to keep you watching more. The assassination business is not foreshadowed or serves as a foreboding event, but is simply used as a reason for the strife Jackie Kennedy feels. And when the film focuses on how distraught she is, it’s Natalie Portman’s time to shine. Once again demonstrating why she has become the respected actress, Portman conveys a ton of humanity into each scene while showing how emotionally drained and chaotic Kennedy was likely feeling in the aftermath of her husband’s death. A great scene involving breaking the news to her kids was especially well done because you feel her breaking down all control as she tries to hold on to her sanity. It’s a genuinely moving performance that I sincerely wish were in a better film.

The movie doesn’t feel like a cohesive whole, it’s very airy and there’s very little in the way of connecting scenes to each other. Jackie gives me the sense it wants to be greater than the sum of its parts, but it either didn’t belive it had a strong narrative to hold it all together or sincerely believed its unsequential storyline would make the scenes more interesting. Either way, the directorial choice left a lot to be desired.

And it’s a shame too because this is a very well done production on what I understand to be a low budget. Everything from costumes to the sets the the lookalikes for famous figures like JFK, Robert Kennedy, and Lyndon B. Johnson gave the sense that these filmmakers truly cared about getting tiny details absolutely right. When the film recreates Jackie Kennedy’s televised tour of the White House, it truly impressed me how the film captured the same grainy quality of the original event as well as Portman’s capture of the First Wife’s subtleties and mode of speaking.

It absolutely frustrates me that I don’t like this film more because so much thought and care was given to provide you the full emotional weight of Jackie Kennedy went through before and during the infamous funeral. But the film became far too concerned with its own legacy as a biopic as the characters were obsessed with preserving JFK’s legacy. And while all the talk of preserving history at the time would have made for an endlessly interesting documentary, it lacks the sense of tension that all the other heavy emotional scenes were packing. The narrative choice is a gambit that doesn’t pay off and makes it only memorable as an example of “good try, but not enough.”

I do believe Portman more than earned a nomination for Best Actress of the Year, and to watch her I can easily make a recommendation for this movie. Her lonely scenes were enough to keep me invested completely in her, but the story’s a frustrating mess that some critics are praising a bold choice, but I think it’s poor decision. But given its attached to a very weak whole, I’m giving this a lower…