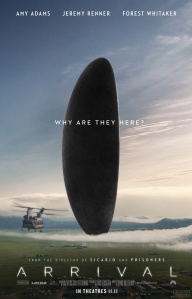 Well, well, we are on a role for timely films that discuss current horrible trends and seek a hopeful resolution to the mess. Oh wait, you thought this was some alien first contact shit? Well it is, but like any good piece of science fiction (not science fantasy, which I’ll get to later), this is a film that explores how humans would react to a plausible but far-fetched situation through hard analysis and human decency. So basically the exact opposite of what an upcoming US presidential administration would take. And if you think I’m not going to bring up politics in my review, then you need to take a hard look at this film closer.

So we start with Amy Adams as a renowned linguistics professor getting over the death of her only daughter when 12 large UFOs appear in different parts of the world. She, along with Jeremy Renner as a physicist, is recruited by a colonel played by Forest Whitaker to determine why these extraterrestrial ships have appeared and who is piloting them. Upon meeting these aliens for the first time, Adams comes up with an idea of communicating with them through their own written language. But as she does so, she begins to experience strange phenomena as the rest of the world becomes increasingly paranoid of these visitors, and global war hangs in the balance.

So big dramatic reveals are in store and reception to this movie seems to be based off of “oh, isn’t this clever?” and “oh, this film thinks it’s SO clever?” Basically, your reception to this movie seems to be based off of the conceit that this is a “thinking person’s movie” rather than just a quality film. And while I’ve ragged on films like The Neon Demon and Swiss Army Man for pretensions usually seen in indie arthouse bullshit, I criticized them not because they were “smart” (they’re really not) but because they ultimately had nothing to fucking say. Swiss Army Man was all about a dude hanging around a talking corpse that may have been magical or a fever hallucination, but it stumbles around for a conclusion about the whole oddity. Similarly, The Neon Demon seemed to be about the exploitation of Hollywood models before devolving into vampire lore out of fucking nowhere (that’s literally the best understanding I’ve found), but it adds nothing new to either subject material. Arrival, on the other hand, does have some shit to say (quite a few things in fact) and it’s particularly relevant in our current time.

For starters, this film approaches the subject of linguistics as a mathematical equation that makes it seem thrilling and interesting at the same time. Similarly to seeing plant life grow in The Martian, deciphering the aliens’ written language is depicted as a race against time and a newfound exploration into a subject many people probably never understood. And that’s likely because many of us don’t take our native tongues for granted. Unless you took the time to seriously study another language, we don’t think about the complexities in asking questions, understanding responses to specific inquiries, or even how we comprehend dreams in specific dialects.

Further, the analysis of language leads to ethos of the film: understanding and listening  to another’s culture is important to bridging gaps between separate groups. And not simply between the humans and the aliens, but among humanity itself. For a change of pace in big budget Hollywood productions, China takes on a more aggressive and militant stance that could easily be seen as counter to the goals of our main protagonists and ends up sealing communications with other countries to decipher the meaning behind the aliens’ language. But this development isn’t portrayed in some broad stroke fashion, but rather it’s done with nuance and told through three dimensional characters that would reasonably be acting paranoid over something they didn’t understand.

Ah, there’s that central theme rearing it’s head all over again. And at such an important time too. Look, I’m not claiming the filmmakers knew perfectly well what was going to happen in the American Presidential Elections or the Brexit decision, but Arrival does give me (and I hope others) some food for thought as to how the results of both events came about. Everything from “fear of the other leading towards hatred of the other” and “failing to communicate a particular stance can lead to disastrous effects” to “people being motivated to commit violence against those they don’t understand.” All of these big ideas are explored to a surprisingly frank degree that still doesn’t come across as preachy because it’s presented with a matter-of-fact approach. And that’s BEFORE I even talk about a major device employed by the aliens that radically alters the final 30 minutes of the film.

I’m not going to spoil what this plot device is, but suffice it to say, it’s a bit of a “mindfuck.” What’s great about it is that it has all the recipes for a great twist: leaving a bunch of clues in plain sight, not bringing much attention to it until the reveal, and the twist is utilized effectively to bring home the major themes surrounding the movie. It’s a turn that proudly gets to be in the same category as Memento and Fight Club for me, and I thoroughly enjoyed the hours after the film in dissecting how it all came together. Best of all, it’s not absurdly complicated and leaves some vestigial concepts open to interpretation. I know there may be some people who’ll argue that it doesn’t make a whole lot of sense, but I direct those people to the aforementioned Swiss Army Man and The Neon Demon for films with weak ass twists that don’t make any sense and adds nothing to the final product.

Tying all this together is Denis Villeneuve, director of one of my favorite films of 2015, Sicario. And after making his mark with the equally excellent Prionsers and the surreal psychological thriller Enemy, this guy has now cemented himself as one of my favorite directors to watch. Mercifully though, Arrival is perhaps his most hopeful film in his resume with all his previous efforts being dark, depressing journeys into darkest corners of humankind. Which is not to say this film is all gumdrops and roses…far from it, the score and lighting present an oppressive atmosphere that adds to the characters’ looming deadlines, the dread of uncovering the true purpose of the aliens, and the growing paranoia experienced by everyone in the world over these extraterrestrial visitors. If I had a complaint (and it’s painfully minor), I’d say some of the computer effects didn’t quite hit the mark (something involving a character’s hair. But the rest of the special effects are used responsibly to tell the story of first contact.

The MVP of this production is definitely Amy Adams, hell she practically carries this movie on her back for the final act and brings it to a satisfying conclusion. Her journey in understanding the aliens mirrors our own but she has enough of a character to avoid any pitfalls that usually plague Hats in other science fiction productions. Supporting her is Jeremy Renner giving a cheeky but subdued performance that gives us a bit of a release when shit starts getting too heavy, and Forest Whitaker is on hand to add some good ol’ fashioned gravitas that feels no less real.

This is some damn fine speculative science fiction, using the established scientific method in order to craft a tale of how people would confront a new situation. While science fantasy fare like Star Trek Beyond entertains and thrills while also presenting interesting stories, I do find that hard sci-fi like this and stuff like The Andromeda Strain and The Twilight Zone shows us more about our own fragile humanity and psyche than most other genres of entertainment. Thoroughly enjoyed Arrival from beginning to end, it’s sitting pretty among my Top 3 of 2016 at the moment; so this is getting a very, very high…