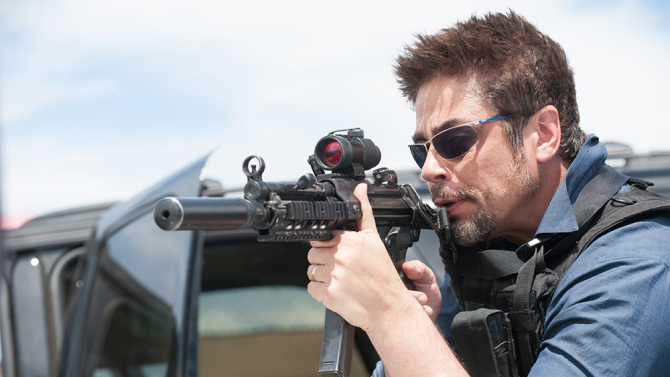 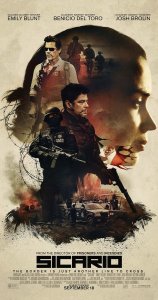 We’re in the home stretch of the 2015 retrospective, as we move on to a film that was being thrown at me by various friends recommending the same. Finally got a chance to see it and holy hell…this is one of the most vicious 2015 films I saw.

We begin with Emily Blunt as Kate Macer, badass FBI agent raiding Mexican drug cartels in Arizona. After her latest sting uncovered a metric ton of dead bodies lodged in the walls of a cartel hideout and left two cops obliterated, she joins Matt Graver’s (Josh Brolin) special task force. Brolin’s character is supposedly some CIA/DoD spook, but he leaves Macer and the audience completely in the dark. Even more disturbing to Macer is that Brolin is paling around with some guy named Alejandro (Benecio del Toro) who’s an absolute creep and a deadly killer.

Sicario excels in bringing you into the world of the Drug War, one of the most tragic and disgusting battles that is happening within and outside the borders of the United States. All the grizzly details are presented in full with the brutal tactics employed by both cartels members and government agents. You can almost understand why the government would start making deals with the Devil.

And the Devil, Josh Brolin, is. His character is constantly smiling as he hides details of his covert operations from Emily Blunt and the audience. After the first few minutes, you are immediately distrustful of anything that comes out of his mouth. Brolin is always an excellent actor, and with a sly and condescending smile, he was just making me more pissed off than anything. Not in a, you are a useless-character sort of way, but in a you-are-evil-fucking-incarnate-I-hate-you sort of way. You know for a fact he’s up to something, but the fact he isn’t telling you the endgame is pissing you off more than anything.

Emily Blunt feels the frustration more than anyone. She serves as both protagonist and audience surrogate but avoids the hat trap, by having an obsessive personality that leads her deeper and deeper into a rabbit hole of pure chaos. I’ve seen people debate about this character, refusing to sympathize with her for going along with Josh Brolin’s schemes despite being constantly kept in the dark about his strategy or even goal. But she serves an important purpose in a theme I did not expect to see: rape as a weapon.

Let me state right here that you never see someone get sexually assaulted. No one even says “rape” or “assault.” And yet, Sicario is a movie all about rape without the actual depiction or implication of the act. That’s what made me curious about the film after reading about the subject here. Several lines of dialogue are spoken throughout the film like “Lie down and take it” and “Don’t struggle, just stay still” that are designed to trigger thoughts inside you about sexual assault. You’ve heard these lines over and over again in the context of rape, but they are spoken here in subduing certain characters during military combat scenarios. It goes back to what rape is all about: power over others.

The character most emblematic of this theme is Benecio del Toro’s Alejandro. In the beginning of the movie, he’s a man of few words refusing to even make small talk with Emily Blunt’s character. But you begin to see his utilization of his masculinity as a weapon in one scene where he spreads of the legs of a tied up cartel member (a man) then positions his crotch right in front of his face. The camera purposefully conceals the cartel member’s face as all you see is del Toro’s behind, while a witness to this simply says “I don’t need to be here.” The scene then cuts to a drain pipe while you hear struggling over the background…but never see what Alejandro does to the man. You do know, however, that he got the information he was looking for.

Emily Blunt serves as the perfect foil to this display of power as she still tries to believe she can take out the cartel “by the book.” By following her, you have that much needed perspective of disgust to the tactics utilized by her own government in the ongoing drug war. The government’s own reaction to Brolin’s and del Toro’s tactics are “nothing else is working” and “well what did you expect” (there’s that rape theme again). Blunt is not a meek character, so she does not go along with the duo’s schemes without constant questioning even if she doesn’t get the answers. Ultimately, however, she finds that they were simply using her position for their own purposes and willingly discard her when she has served her purpose.

The frustration in the whole world seemingly turning against Blunt can easily mirror sexual assault survivors feelings of no one believing their side of the story. Without showing you a crass or exploitative sex scene, you go through the entire spectrum of what rape involves from the perpetrators to the survivor to the world reacting to this news. It’s vicious. It’s brutal. But above all, it’s goddamn effective.

Put together by Denis Villeneuve, the director of another suspenseful and tense thriller called Prisoners, this is stellar filmmaking. I can also appreciate the man for once again dealing with difficult questions on morality and “ends justifying the means” by employing an international cast of thespians set in the Untied States. As I said previously, every camera shot he takes serves an important purpose to the film’s message, but he doesn’t stop there. There’s quite a few shootouts throughout the movie, and he directs each chaotic scene near flawlessly. Along with an oppressive score, Villeneueve has crafted one of the most brutal films of 2015.

So, so, disappointed in myself for missing this in theaters. This shot itself into the ranks of my Top 10 of 2015 and you should definitely check it out when you can. Giving Sicario a strong…