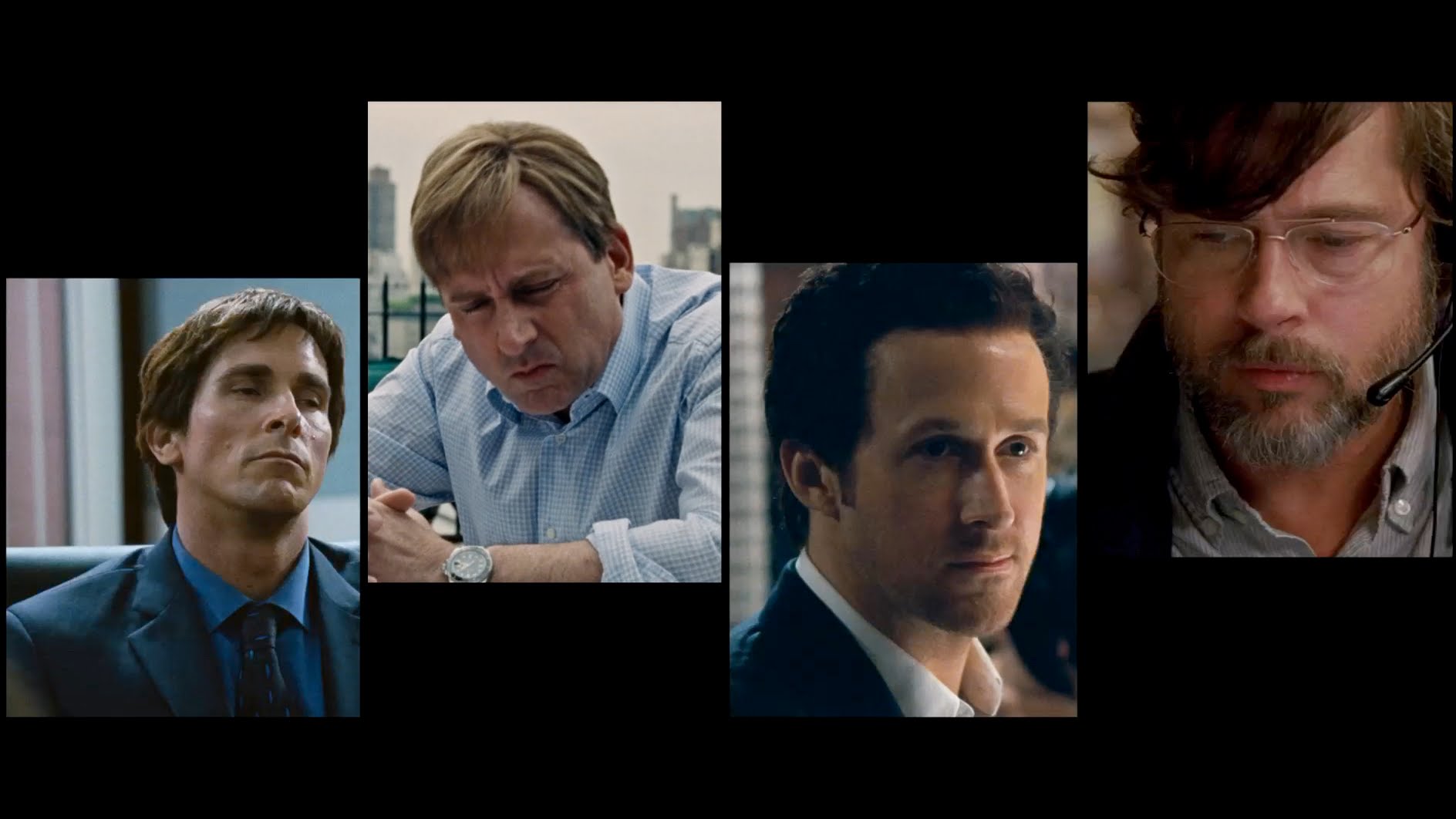 This is an adaptation of a book by Michael Lewis, a guy who must write pretty interesting stories about business and sports with his previous works being The Blind Side and Moneyball. But this film is an exploration into his interviews with several financial analysts and traders who saw the 2008 economic collapse coming…and actually profited from it. So we get into the life of Michael Burry (Christian Bale), a practically autistic hedge fund manager who’s the first to see how fucked the American economy was going to be. We also see Jared Vennett (played by a charming-as-fuck Ryan Gosling), a trader who catches wind of Burry’s plan to profit from the impending disaster and cuts a deal with the paranoid and highly distrustful Mark Baum (Steve Carell going two for two in solid dramatic performances). Finally we get Brad Pitt basically making a cameo as he mentors two millennials who luck their way into the knowledge of the disaster.

Bit of a lengthy synopsis, but I might as well get the four “lead” actors out of the way, because not one of them is a focal point in this movie. Honestly surprised Bale got a Best Supporting Actor Nomination for this movie, because his performance (while eccentric as ever) really wasn’t a bright spot of the film. Pitt, Carell, Bale, and Gosling all do great jobs, but none of them are here to tell you a story to be honest. They are all here to give a lesson in finance and how bankers are both fucking greedy and fucking stupid.

Yes people, the film stops dead in a few places as Gosling’s character breaks the fourth wall to explain how concepts like credit default swaps work. But even he admits that you’re not going to listen to him, so he gives you a celebrity that’ll tell you instead. Like say Margot Robbie, Selena Gomez, and Anthony Bourdain…yeah I’m not kidding, these people literally turn to the camera looking as hot as they can to explain what the high holy hell is going on.

For the most part I was able to follow along with what these bankers were talking about; i.e. bankers are assholes and willfully obliterated the economy because they relied on a house of cards made of lies. But some shit went over damn head, I had to use context of the scene and characters to figure it out. Keep in mind, I’m a guy who studied finance in college (major in international business) before going to law school, so if I’m having a tough time figuring this crap out, don’t know how the average moviegoer is going to take it.

Not helping is the director for this movie. Now, I do find it admirable that a guy like Adam McKay who’s directing credits include Anchorman, Talladega Nights, Step Brothers and literally any Will Ferrell comedy is attempting something outside of his wheelhouse; but for his first dramatic piece, the guy really doesn’t have a voice. His camera is going fucking everywhere as these actors are talking and trying to explain the economic doomsday. Like focusing on random objects that have no relation to what is going on or out-of-place city shots spliced into the film. I’m also not a fan of the random celebrity cameos explaining these highly complicated financial terms to me. So the guy comes across as he’s ripping off Martin Scorcese’s style in The Wolf of Wall Street and Oliver Stone in Wall Street: Money Never Sleeps (the latter is a terrible idea in general to imitate). Mostly it’s the latter McKay is copying from and if it didn’t work then, it really doesn’t work now.

You can hear the great script for a documentary on the 2008 crash through every line of dialogue; but the script really does not work well as a drama or dark comedy. We stop every now and again on a character’s family life that’s brought up and almost immediately forgotten within seconds. Carell’s character in particular is established to have recently lost his brother after the latter committed suicide, and an attempt is made by the film to have Carell open up about the subject…but then we switch to something completely fucking irrelevant.

If you see this movie, do not attempt to form an emotional character with anyone in this movie. Gosling memorably tells you towards the end, “I’m not the hero of this story.” This is a movie about how greed and short-sightedness operated for decades unchecked and how a couple of smart (if not magnificently lucky) people simply learned to look at easily obtained public information to come to the conclusion that this was all going to go horribly wrong. None of the characters make any attempt to stop the economic collapse, but take steps to secure a nice and tidy profit.

The only character who gets indignant about profiting from this misery is, unsurprisingly, Brad Pitt. His character berates two millennials who were cheering of their secured deals in which they bet the housing market would implode. I say this is not surprising because he’s one of the guys who put money into making this movie and he did the same thing two years ago with 12 Years a Slave, where he played the one white guy who would save the main character.  But hey, if you’re paying everyone’s checks I guess that means you get to crown yourself Jesus.

Yet the actors are really what saved this movie for me. Much like Black Mass, you’ve got a few diamond performances in a sea of absolute mediocrity. Carell injected a ton of personality into his crusader-like character that you can’t help but want to join him on his no-bullshit quest until you (and even he) realizes the full extent of the damage he’s profited from. Gosling narrates a large part of this movie, and he whips out (that’s what she said) every ounce a charisma he’s got to walk you through this nightmare. Pitt is hardly in this movie for me to form an opinion on him, while Bale gives a decent method acting performance that is severely wasted since you barely get to spend time with him.

Overall, this movie was pretty frustrating for me. The subject matter alone was infuriating enough, but I wanted to get angry about it through an effective and well told story. Unfortunately, McKay and his editor (both of which have been nominated for Oscars…what the fuck) did their best to sabotage this movie even as they employed fine actors who all did commendable jobs. The script is better suited a clever documentary about this topic, so I’d much rather Pitt turn Michael Lewis’ next book into that format. For solid performances alone and for the fact the subject matter is important, it’s skirting a high Rental, but I’ll be generous and give this is a very low…

5 thoughts on “The Big Short Review”