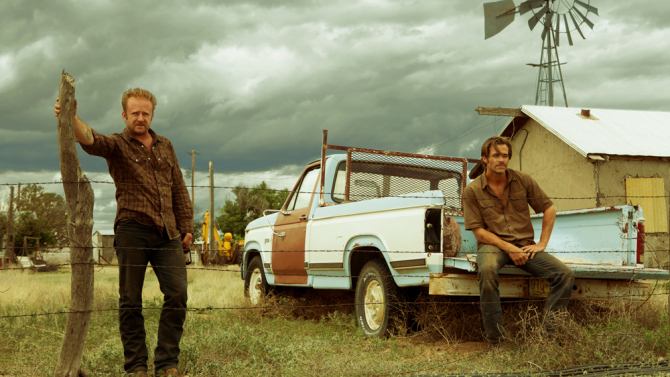 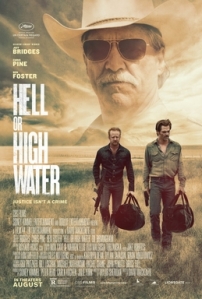 Demonstrating why West Texas is an apocalyptic wasteland.

Goddamn did that feel good. Seriously, I got lucky this month with two movies that easily are now in my consideration for the best of 2016. I’ll get to the other one sometime this week, but today we’re going to talk about Chris Pine trying to look ugly for his best role in…actually it’s really is his best role at all. And even more surprising is that this movie is a modern day Western.

So Pine and Ben Foster are the Howard Brothers, robbing small town banks in rural West Texas. But while their methods are standard stick-em’ up affair, their targets are carefully calculated. Foster plays the seasoned, well armed career criminal who gets recruited for these heists by his ordinary citizen brother played by Pine. You quickly realize that Pine is only doing these heists to save his home being foreclosed by the very bank chain he’s robbing. Pursuing the duo is Jeff Bridges as a marshal just days from retirement (and shockingly doesn’t go the way of cliché “one week from retirement” cops).

First off, this film has perfect pacing. You start the film with the brothers performing their first heist in a string of planned robberies over the course of a week, with nary a thought for a flashback showing how or why this came about. Instead, once the initial high of the heist occurs, the film takes a breath and has you crack open a beer with the brothers as they discuss their current predicament and you slowly learn their reasons for the bank robberies as well as their admittedly clever plan. Interspersed are scenes featuring Bridges exchanging racist epithets towards his middle aged partner played by Gil Birmingham, and you get to appreciate and like these cops as well.

This is simple but effective character development. You get two pairs of characters in an interesting situation in which they discuss their respective plans and you get to know who each of these people are by the end of this (surprisingly short) film. You get to know their goals, aspirations, and personalities; which make them immediately relatable and have you root for them, even though each pair is working against the other. The conflict is spurned not only by the rising action of the movie, but also by how these people clash with each other. Most of this comes from the excellent script written by the same guy who did last year’s excellent Sicario, which I’ll remind you made my Top 10 of 2016. The writer, Taylor Sheridan, really understands proper pacing and getting you right to where the action is supposed to be but at the same time provides you a reason to give a shit about his characters. It’s nothing new in film, but he hits the right notes to get someone like me quickly invested.

It helps that all these characters are being played by equally great actors. Pine in particular was the standout from the cast because I’ve honestly never seen anything he’s ever done to impress me. He’s fine to me in the Star Trek films, but it wasn’t until Beyond that I genuinely even thought he was doing a competent job. No, not even his magnetic turn is The Princess Diaries 2: A Royal Engagement was good enough for me. But for Hell or High Water, he carries a rural Texan accent as a divorced father who is understandably over his head, but is moored by his devotion to do right by his estranged sons. He doesn’t romanticize what he’s doing, and carries a quiet vengeance against the bank he’s targeting.

Meanwhile Foster plays the first loose cannon in a heist film I actually freaking liked. From Goodfellas to Heat, your loose cannon character is always an unhinged asshole who will so clearly make everything go wrong in the end, but the other crew members tolerate his presence for increasingly dumb reasons. But for this movie, Foster is only reckless because he knows this may be his last score, so he pulls out all the stops necessary to put his brother’s plan into action. And screw it, he’ll at least enjoy himself on his way down to hell.

Bridges once again turns in a great performance, even if it is a copy of his turn as Rooster Cogburn in True Grit. The grizzled marshal who’s on his last legs but has in him just one more fight for another day. He’s only made more entertaining because he acts like such an asshole to his half-Mexican, half-Native American partner; tossing in a stereotypical comment whenever he can and indeed inviting similar retorts from his increasingly exasperated partner. But he’s quick thinking, and his obsession  with capturing the “bad guys” is much more understandable.

Gil Birmingham, meanwhile, will be the underrated player in this piece compared to his more well known costars. His tired partner shtick is both realistic and endearing, as he’s the perfect foil for Bridges’ dickhead act. But he’s the key to the tragic ending this film inevitably is leading to. That’s not a spoiler, all these characters speak as their marked men for death; but Birmingham provides humor that makes this darkness go down very well.

The great balance between comedy and gritty crime drama makes this an effective Western. The filmmakers simply replaced horses with cars and bolt action rifles with semi-automatic rifles. The main characters pass through saloons with oddball supporting cast members, and everyone contemplates about the nature of life and death (and debt) with smart ass dialogue and wry, tired smiles. And the climax is where this film seals its place for me in my favorite of the year. The drama kicks into high gear and you quickly realize how dangerous it is to do a bank robbery in goddamn Texas…open carry is a motherfucker.

This is all neatly put together by a relatively unknown director named David Mackenzie, who primarily directs low budget independent fare, but never quite sticks to a particular genre. His action scenes are brutal, visceral but he takes his time to set up the environment for you to appreciate and become immersed. Mackenzie is essentially the capstone of well put together production that encapsulates the phrase “lightning in a bottle.” A perfect mix of writing, direction, cinematography, and cast to create a solid film.

When I left the theater, feeling perfectly satisfied, I was reminded of the Coen Brothers’ version of True Grit and not just because of Jeff Bridges. It was because that it was a Western that had the Coens’ style of disjointed characters and gorgeous cinematography that gave you a satisfying conclusion unlike many, many of their works. Hell or High Water feels like a great Coen Brothers’ film, mixing beautiful vistas, a great script and stellar acting all without giving you a limp, weak ass conclusion like the last twenty of minutes and yes, I am daring to rag on No Country for Old Men. Another “modern Western” that I would consider in my collection of favorite films of all time list were in not for that fucking ending. But Hell or High Water now surpasses that film in estimation for me, because it does everything right AND gives you an ending that feels appropriate.

If the movie has any weakness is that I could occasionally see through the actors’ performances and see the thespian themselves, particularly from Bridges and Pine (sorry dude, you could ugly yourself all you want; you’re still a pretty boy). And while some might not like the pauses for breath this film takes, I personally appreciated it because they were great scenes that never felt like bridges to even better scenes.

I am so, so close to giving this BETTER THAN SEX, but for now, I’m going to give this an extremely high…