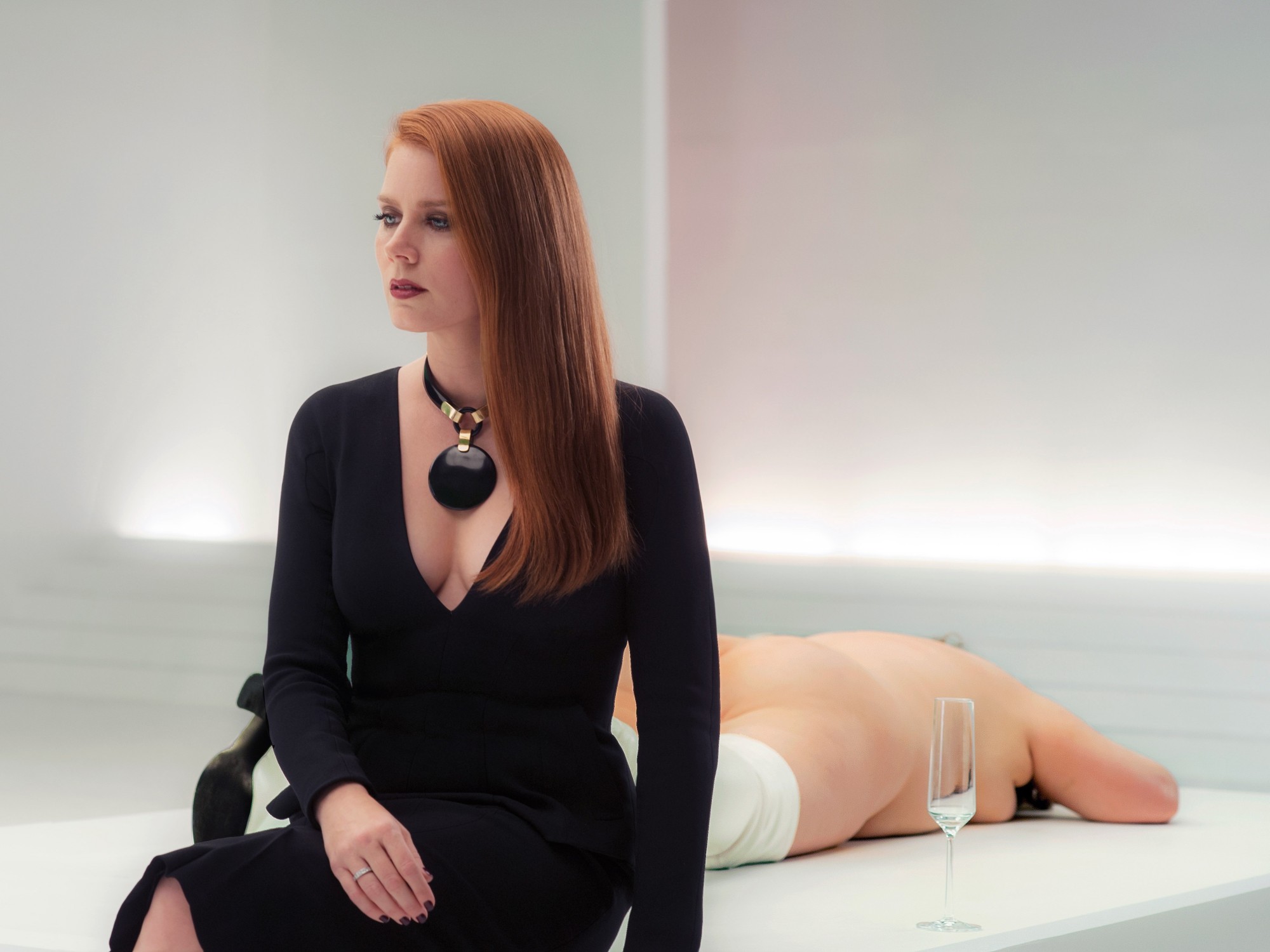 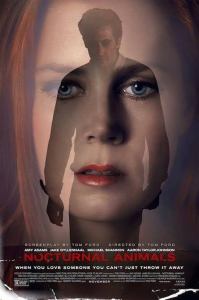 Hey everybody! It’s time for Indie Art House Corner *cue children’s cheer track;* it’s where the budgets are low, the concepts are high, and nothing makes sense.Today we have an entry from a fashion designer turned filmmaker, Tom Ford, returning after his previous critic darling, A Single Man, from a few years back. Full disclosure: I wasn’t crazy about his previous effort but that was during my nascent phase as a film critic when I didn’t write and infect you with my delicious words. So how does Ford’s sophomore entry turn out? A bit of a mix bag of opinions honestly…

We have Amy Adams as Susan, who’s a wealthy gallery curator in Los Angeles married to a handsome businessman (played by Arnie Hammer), but her life has started to feel empty between her spouse and her job not artistically satisfying her. She gets thrown for a loop when her ex-husband (Jake Gyllenhaal) drops off the manuscript for his first novel titled “Nocturnal Animals” to which he dedicated to her…I should add they’ve been divorced for about 20 years at this point. When Susan begins reading the manuscript, she’s absolutely sucked in to how depressing and violent it is. Consequently, you are supposed to be as sucked into the manuscript as well since the film becomes a “story within a story” with the focus on the novel’s story. This portion of the movie, which also stars Jake Gyllenhaal as the protagonist in a brazen display of subtlety, features a character on a path of revenge after a gang of rednecks run the character’s car off the road, rape his wife and daughter before killing them, and leave the “hero” for dead.

So yeah, we get two pleasant stories for the price of one as we alternate between this revenge story and Amy Adams reading said revenge story while reminiscing about the rise and fall of her first marriage. The problem I had was that these two stories feel completely incongruous to each other despite the film taking great pains to draw parallels between the two. The story within a story is a gritty, revenge drama a la Death Wish, which is filmed in a tense style that wouldn’t seem so far from the territory of Hell or High Water (and not just because it too takes place in West Texas). But the framing story follows a bored wife displeased with her vapid existence, failing business and failing marriage reading a violent story on her bed or in her bathtub, but these sequences are filmmed in artsy-pretentious bullshit style employed by someone trying to copy the style of The Neon Demon (pro tip: DON’T copy anything that movie).

The film proceeds to demonstrate several parallels between the tales in the clumsiest manner imaginable until you get to the end where you’re supposed to say, “ohhhhhh how clever” but end up saying, “dude, you’re being too obvious.” The direction in this overarching story gets frustrating as well, since the movie feels like going for odd angles and framing during these scenes but opts for a traditional format of cinematography whenever the film is in crime drama mode. Consequently, you end up finding that the crime drama has a much better style (that’s also cohesive) compared to the weird angles in your other story.

I’ll need to drop into spoilers later on in the movie to fully explain myself, but for F now let’s talk about what works well before I discuss why I don’t think this should be considered “best of the year” as several critics seem to be claiming the film as. For starters, I really enjoyed the story within a story because it features two actors giving stellar performances that carry the whole film on their backs. First is Aaron Taylor Johnson (from Kick-Ass and Avengers: Age of Ultron) giving a startling great performance as the most despicable redneck you’ve seen on film since Deliverance. He moves around the scenes like a snake while trying to come across as intimidating as possible, when really he’s one of the most pitiful kind of guys out there. Thing is, when he’s threatening Jake Gyllenhaal and his family, he comes across as a genuinely unnerving danger that you can’t help but feel uncomfortable around. Later on in the film, as the character is confronted with his crimes, he doesn’t skip a beat as to how slimey he can be to escape justice.

But hot on his heels is Michael Shannon, as a take-n0-shit-cop who feels like he’s on his last legs of his life but doesn’t want to retire until he sees justice carried out. Shannon’s gruff demeanor offers a slight glimpse of compassion for Gyllenhaal’s character by going out of his way to investigate the murder of his family, which in turn fuels his later decision to go off the law when it appears that justice may not be served. Shannon exudes charisma in these scenes, and complimented by Johnson’s performance, the pair should be featured on any Best Supporting Actor list easily.

But an issue arises with this film as a whole when you realize these were the only good performances in the production. Amy Adams feels wasted here as she spends huge swathes of screen time reading a book (in silence), so she ends up having to communicate what she’s feeling through non-verbal cues alone. To Adams’ credit, she succeeds in this endeavor more than she fails, but compared to her performance in Arrival, this role just feels so pedestrian for her.

At least she fares better than Gyllenhaal, who is supposed to play both the ex-husband of Amy Adams in flashbacks and the protagonist of his own story. He’s not bad in any of these scenes, but he’s not as great in non-verbal acting here compared to Adams, so his performance winds up being pretty forgettable compared to all of his costars. Which is strange, as you spend a good chunk of the movie with him as either of his two characters. But I honestly can’t recall of a scene where impressed me all that much.

Maybe it’s because the writing really isn’t that great here. The story within a story might have the best dialogue, but the framing device employs a lot of vapid, ethereal speak that brings back strongly unpleasant memories for me of The Neon Demon. You also find at the end of this film the whole “point” of the crime narrative and it’s relation to the overarching story, and it’s simply unsatisfying to witness. The manuscript’s story begins, proceeds and ends well (even if it is rote with cliché); but the framing narrative is where you truly exit the film and it feels ultimately pointless and honestly pretty disgusting.

To get what I mean by that conclusion, I need to go into spoilers, so I’m going to offer my final thoughts and rating now. Stick around after the rating for what I mean by “disgusting.” Half of this film feels like a competent crime movie that has excellent moments but doesn’t end on a particularly strong note; the other half of the film is busy trying to make some point about relationships and art that comes across as more infuriating than anything else. So, using the wisdom of Solomon here, I’m caught with my opinion of the film torn down the middle between my feelings for each tale. I think people should check this movie out, but I will not be regarding this movie as “best of the year” material; so for very damn good performances, I will give this a very, very high…

SPOILER TERRITORY. BACK OUT NOW IF YOU HAVEN’T SEEN THE MOVIE. (Also I discuss at length how the revenge for the rape that occurs is completely screwed up; so if you’re not comfortable talking about that stuff, you’ve got your warning)

Alrighty, so it’s ultimately revealed that Jake Gyllenhaal wrote this melodramatic revenge story as payback against his ex-wife for not thinking he could write a great book, cheating on him, and aborting his unborn child at the end of their marriage. So this gripping crime tale is basically revealed as one big middle finger to an ex who didn’t appreciate a writer’s art enough, and therefore makes wildly exaggerated comparisons between the writer losing his wife to another suitor and his wife getting raped and murdered by someone who sees himself as “more of a man” than the writer.

Not gonna lie, this revelation sucked out a lot of the enthusiasm I had for the crime portion of the film. This conclusion is what ultimately dropped the film for me from a MATINEE to the RENTAL. I’ve got a lot of personal grudges against using rape as a narrative device because I find it as a cheap and exploitative way of shoving something “shocking” into a piece of art for the sake of “shocking” (see later seasons of Game of Thrones). I’m a bit more receptive to using rape as say a metaphor for power as in Sicario or even to make a point about struggles between men and women as in The Girl with the Dragon Tattoo. But this movie right here tries to draw a parallel between rape and infidelity, which is completely fucked up.

For starters, rape is all about taking someone’s sexual autonomy away to assert some form of dominance; whereas an infidelity can arise from a multitude of different reasons like being weak-willed to wishing to violate another’s trust to feeling dissatisfied with the state of a relationship. What the fuck does rape have anything to do with fooling around? Jack shit.

Some defenders of this film will then point to the fact that Adams aborted her and Gyllenhaal’s unborn child without his consent as a weak way to draw the rape parallel…but are they freaking sure they want to go down that path? We already have a wide berth of arguments from pro-choice proponents that a woman is to be in control of her own body without government interference or even the interference of their male partners, and pro-life people actively avoid talking about the man who inseminated a woman because they think the “sanctity of life” is a considerably stronger argument to them. And when we have completely backwards laws that permit actual rapists visitation rights to their offspring born from sexual assault, this movie’s conclusion that an abortion is in anyway analogous to rape is freaking disgraceful.

But even taking out the whole abortion-sexual assault comparisons this film tortuously makes, your movie still ends with the writer claiming revenge on his ex-spouse by standing her up at a meeting after he moved her emotionally with his writing. Now if the film had framed the ending as a disgusting move on Gyllenhaal’s character’s part, I’d have been more receptive to the film’s denouement; but this movie treats Adams as completely deserving of her fate which frustrated me even more. This movie inevitably goes out to every little shit who thinks he is a special snowflake that “no one understands” his art and so produces pointed vengeance against people who “wronged” him. Screw this writer and his toxic ass worldview.

So yeah, ultimately the movie’s alright, it just gets bogged down by some amazingly pretentious bullshit, which if you think about it a little more is just plain disgusting than revelatory.