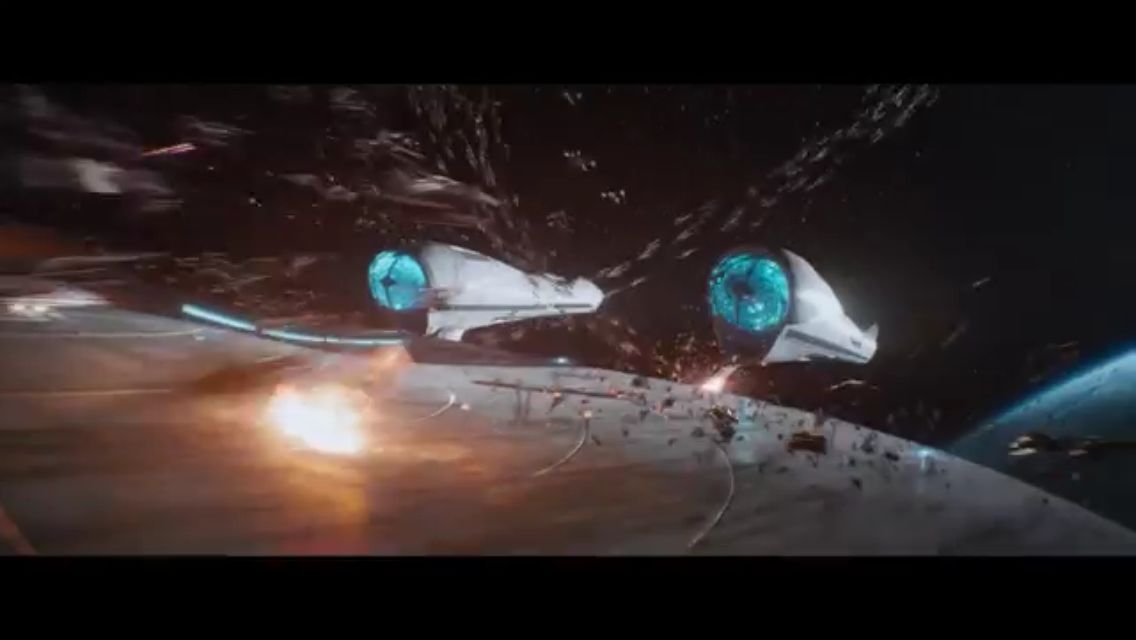 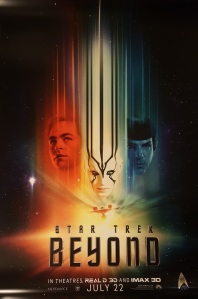 I thought the Star Trek reboot series had hit a wall with the floundering Into Darkness, doubling down on a dreary aesthetic and more bullshit “destiny” with a side of “magical blood” plot device that make up the majority of the work of the former writers, Robert Orci and Alex Kurtzman, other failures. And yet, here we are with a new installment featuring the same reboot cast in a brand new adventure that propels the series into unknown heights courtesy of a man credited with resurrecting a dudebro 90’s series into the Carvengers, Mr. Justin Lin.

So the crew of the USS Enterprise are in the middle of their five year mission, and things are beginning to “get” to certain members. Spock (Zachary Quinto) is dealing with some sad news that’s forcing him to rethink his relationship with Uhura (Zoe Saldana) while Captain Kirk (Chris Pine) is rethinking the whole Starfleet business since he hasn’t quite figured out why he wants to be a commander for any other reason than challenging a dare or living up to his father. But the crew gets thrown for a loop when the Enterprise gets completely wrecked by an alien warlord named Krall (Idris Elba) forcing Kirk, Spock, Uhura, Sulu (John Cho), Chekov (Anton Yelchin, RIP), Bones (Karl Urban) and Scotty (Simon Pegg) to crash land on a barren planet as they figure out why Krall wanted to attack the Enterprise and to figure a way off the rock.

For fans of the television series, this is a pretty decent setup for one of the crew’s away missions where red shirts die, new alien technology is discovered, and evil plots are foiled. With the benefit of a multi-million dollar budget, the film is able to elevate one of these cheap episodes into an action-packed thrill ride that still manages to flesh out and develop characters. As I’ve harped on many times in my reviews, the “good” action movie doesn’t just give you cool looking stunts or visuals, but entertains you in between these beats with clever, funny dialogue by characters you give a shit about.

And I must confess that this is the first film in this reboot series that managed to perfectly utilize the majority of the great cast. The 2009 film was fine but it was hampered by a plot that “required” the crew of the Enterprise to belong together through bullshit concepts of fate and destiny, meanwhile the sequel decided to copy one of the best Star Trek films with a poor man’s imitation. What’s different this time is two things: a better screenwriter and and a director who excels with ensemble casts.

First, we have Simon Pegg taking over writing duties and he allows every ounce of his fanboy dreams to run wild with these characters. He makes sure to give each crew member a moment, a sequence that looks great and makes you feel good about the character for one reason or another. He lets Bones become a snarky asshole constantly screwing with Spock and Kirk, he lets Kirk become the hero everyone keeps talking about, and he lets Spock become the deductful and clever right-hand man people have come to love. And of course, he beefs up Scotty’s role considerably. Seriously, the character has never had this much attention in any television episode or film, but here he gets to play some serious comic relief as he introduces a new element to the mix with the alien Jaylah.

Jaylah, played by Sofia Boutella (the chick with blade legs from Kingsmen), has a bit of that typical warrior native that exists in a lot of science fiction, but is used effectively here by 1) giving her personal stakes in the Enterprise crew’s mission and 2) NOT making her a romantic interest for any of the guys. I’m happy to just see a new women character join the crew without having to be a trophy for anyone else, she’s simply allowed to have her own goals and have a unique look with a cool personality and away we go.

The second ingredient that makes Beyond a fun ride is Mr. Fast and Furious himself, Justin Lin. After making the focus of that series about a team of criminals who love fast cars and have a heart of gold, he turns his attention to a different ensemble and does more to energize the Star Trek series than JJ Abrams ever did. As I’ve criticized Abrams in the past, the guy doesn’t trust himself to make up his own action shots and must rely on the work of others to imitate their style. Here, Lin breathes a colorful aesthetic into the blue and grey reboot series by giving you a menagerie of visually distinct aliens, vibrant environments, and bombastic space battles. And when you’re not inside a spaceship, he’s busy giving you blaster sequences, chase sequences, and good ol’ fisticuffs. All of this is streamlined at a breakneck pace that never gets boring, and keeps you constantly stimulated for the next scene.

Ironically, this strength of the film also turns out to be its greatest weakness: the pacing moves so quickly that you end up having not enough “cool” moments for all the Enterprise crew members. Uhura and Chekov don’t really have a whole lot to do, and the only notable new thing about Sulu is that he’s gay…but they don’t make anything out of it. Hell, you could probably edit it out and not skip a beat, as I suspect the movie will when it gets released in China (some Asian cultures aren’t really down with LGBT struggle). But the pacing also hampers what is probably one of the best actors of our time in a villain role.

Now I’ve never been shy about my love for Idris Elba, hell he just gave us an entertaining villain role in this year’s Jungle Book. But he’s severely underutilized here as Krall as they hide Elba under a mountain of goofy looking makeup. It wasn’t awful, hell I’ve seen worse, but it kind of yanks you out of the film compared to all of the other alien designs. Thing is ,he probably has the most fascinating reason for tormenting the crew of the Enterprise, but the pacing only leaves his reasoning for the very end of the movie. Thus reducing him to yet another guy who hates Starfleet. Just like Eric Bana in the 2009 film and Benedict Cumberbatch in Into Darkness. I think this series needs to lower the stakes of future installments to not be about some dude trying to destroy this alliance of planets and be about literally anything else.

While disappointing, everything else besides these criticisms more than make up for them. The action scenes are entertaining and packed with color and life while never coming across as melodramatic like it did in previous installments. I was having a blast watching these characters banter in between these moments and get themselves into all sorts of fun trouble. They even manage to make the teleporter, that’s so iconic to the series, as a major plot device enabling all sorts of interesting developments. More importantly, these action sequences require the strength of the entire crew to come together to pull off and it makes you root for them even more. All culminating in a story beat involving a song choice towards the end that I don’t want to spoil, but I’ve been hearing from some of my favorite critics as a spectacularly dumb moment.

And while the moment is indeed dumb, I didn’t give a shit. I was having a fucking blast with the music blaring in the background. Hell, I was getting giddy just watching all the crew members nod their heads to the beat. Even as I left the theater humming the song (deemed “classical” music to the crew), I couldn’t stop thinking how silly and fun that scene was. You’ll have to check it out for yourself to find out more.

Suffice it to say, I dug the living hell out of this movie. It’s definitely one of the most entertaining films of the summer of 2016 and I can’t think of a person I wouldn’t recommend this to. This is my favorite Star Trek reboot, and second favorite only to Wrath of Kahn. My critiques are more quibbles, so I’m giving to give this a low…

5 thoughts on “Star Trek Beyond Review”