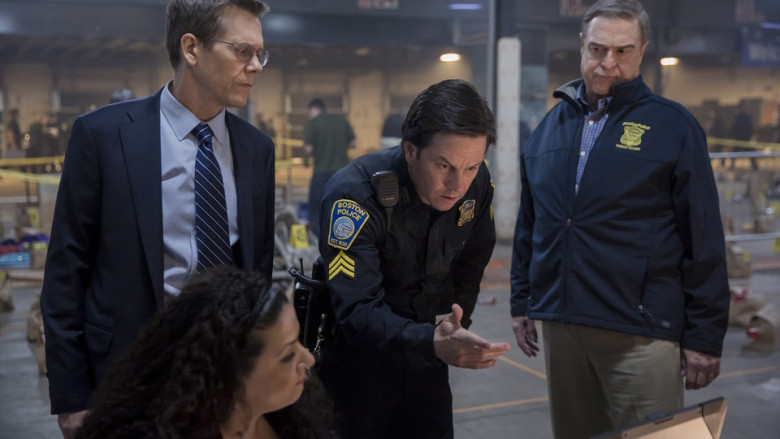 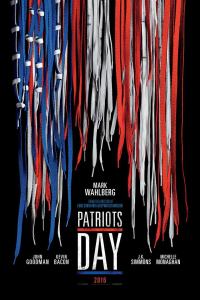 Peter Berg is really trying to reinvent himself after his designation of “knock off Michael Bay” with Battleship. He since has found a muse in Mark Wahlberg, and the duo have been making what I call the “Too Soon” Series. First it was Lone Survivor about the rescue of a single Marine from Afghanistan, then it was the decent Deepwater Horizon about the BP oil spill, and now we have Patriot’s Day which is all about the April 15, 2013 Boston Marathon Bombings. Apparently Berg and Wahlberg seek out their scripts by buying a bunch of books from the new releases section of Barnes & Noble and picking which one would have the bigger explosions. But can Marky Mark be respectful to the underlying events while making himself out to be a hero? Eh…

Alright, I was hoping I didn’t need to summarize the Boston Marathon bombings, but given the fact mass murder is a common thing we’re dealing with in the world, let’s just give you a quick recap. Two brothers named Dzhokhar and Tamerlan Tsarnev prepared homemade bombs and executed a bombing attack of the 2013 Boston Marathon leaving three civilians dead and 280 people with life-threatening injuries such as loss of limb and having shrapnel embedded in their bodies. After attempting to steal the gun of an MIT officer and killing him, the brothers hijacked a vehicle from a delivery man before the duo were cornered by Boston Police. A shootout ensued that led to one more officer death and the death of one of the brothers. After locking down the entire city for a single day, police cornered the last brother to a backyard where he was apprehended. So far so good, and you could reasonably think a movie procedural about the timeline of events might make for compelling viewing.

And when the movie is focused on the process of how they tracked down the Tsarnev brothers and the resulting capture, it does become a decent watch worth your time. The film also tries to follow the lives of various civilians involved with the bombing and the capture of the terrorists by showing you their day to day life before their respective worlds were altered by crossing paths with the brothers. It does help develop sympathy and pathos similar to what Fruitvale Station did with the life of Oscar Grant, but Patriot’s Day goes about it in a grander scale similar to Berg’s own Deepwater Horizon. And also like Deepwater Horizon, Mark Wahlberg is on display as the hero in this latest film and…well it brings the production down significantly.

See, Wahlberg doesn’t portray someone who actually existed during the bombing and investigation, but he sadly comes across as a wish-fulfillment that becomes a part of every single major event that occurred between the bombing and the capture of the last Tsarnev brother. Wahlberg’s character was right between the two bombs that went off, went about rescuing civilians out of the blast zone, even recommends to the FBI how to go about their investigation, he’s at scene of the slain MIT officer, responds to the hijacked driver’s call for help, comes in late to the shootout leading to the death of one of the Tsarnev brothers and is the cop who actually FINDS the last brother in the backyard of a Boston resident’s home. This shit was not only implausible, but it does begin to appear downright insulting as Wahlberg is essentially Superman that saves all of Boston from the evil terrorists, it’s some Saturday Morning Cartoon kind of shit.

The terrorists themselves were portrayed fairly enough…at first. The filmmakers opted to tell Dzhokhar’s defense team’s narrative that his brother was the true mastermind and he just went along with this shit, but also establishes that he was heavily complicit in the attacks and showed little remorse for what he had committed, which for the bombing survivors would be appropriate. What I found inappropriate though, was that the film was attempting to make them look like they were planning a Times Square attack in conjunction with the Marathon bombing…and that shit didn’t happen the way the film portrays. They actually wanted to hit Times Square on a whim right after they jacked their getaway vehicle because the unfortunate truth about these terrorists was that they were fucking idiots. These weren’t well-trained operatives, they were just a duo of dipshits inspired by online videos of terrorist organizations while also spouting insane 9/11 truther conspiracy theories. Which is a much scarier thought deserving of a more though provoking film to explore that, but Patriot’s Day isn’t that kind of a movie.

It is not a biopic movie either in the vein of Hidden Figures either. Instead, it’s far closer in cinematic kinship to 13 Hours: The Secret Soldiers of Benghazi, or more appropriately, Chuck Norris’ The Delta Force. It’s a heavily patriotic retelling of actual tragic events from the point of view of an action hero. Except Patriot’s Day ALSO wants to be a serious Oscar contender as well. Look Berg and Wahlberg, be a truthful retelling or be stupid enjoyable shit like Delta Force; trying to have your cake and eat it too isn’t going to cut it.

There are some aspects of the film I genuinely thought were well done. The survivor’s of the attack slowly regaining their consciousness and attempting to reach out to their families was handled well. The trio of Kevin Bacon, J.K. Simmons and John Goodman portraying police and FBI figures that were actually involved with the investigation was also another highlight from veteran actors. Even Marky Mark gets a touching scene that expands on his breakdown in Deepwater Horizon with Michelle Monaghan as his wife this time. But Wahlberg yanks me my interest in the film out of me when he literally starts saying “we’re going to get these motherfuckers.”

That’s not me and my usual flourish (read: butchering) of the English language, so many Boston characters drop the word “motherfucker” like it’s a Samuel L. Jackson impersonation competition. Like it’s a regular bar fight in Boston going on, and all these dudes are getting rowdy to knock some heads. If this were a more absurd flick like the action movies earlier, I wouldn’t be ragging on it. The fact this film also includes melodramatic contemplation of the deaths that had occurred as a result of this terrorist attack is an embarrassment to both Berg and Wahlberg. What you essentially have is a complete mismanagement of tone in addition to Wahlberg propping himself up to be the sole hero of the piece like Captain Fucking America. And that brings this film down significantly.

While I didn’t hate it, I hope people see this flick and learn on what not to do when it comes to making depictions of real life events. Be slavishly devoted to the story or going fucking crazy with the tale, this middle of the road bullshit makes the filmmakers look like idiots. For the good parts I mentioned, I’ll give this a solid…

Hey you! Yes you! Whether you read my reviews entirely or skip to the end to get an idea of what I thought about a movie, I’ve got a special announcement! The After Lobby is now supported through Patreon, a great crowdfunding site allowing audiences to fund their favorite creators such as myself. Through this program, I can expand the site’s output to include podcasts and video reviews in the future as well as guarantee a consistent delivery of written reviews such as this one. Click the link below if you would like to contribute any amount you wish per month. Any patronage would be highly appreciated!

One thought on “Patriot’s Day Review”