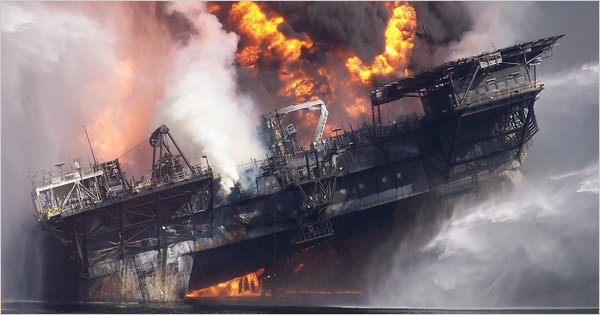 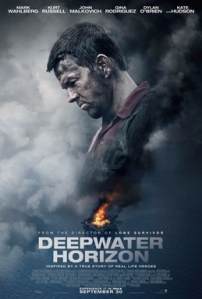 On April 20, 2010, an oil rig called the Deepwater Horizon had blown an oil pipeline, killing 11 of 120 crew members on board and setting the whole installation ablaze. This was all before millions of gallons of oil had spilled into the Gulf of Mexico causing irreparable damage to the ecosystem and destroying the livelihoods of millions of people in the area. This of course means one thing: someone was going to make a movie about this disaster. Because if Clint Eastwood can make 30 minutes of a water crash into a feature length film, any disaster is fair game. Though compared to Sully, the filmmakers have succeeded in crafting something much better than Clint Eastwood can make.

So we have Marky Mark Wahlberg as Mike Williams and Kurt Russell as “Mr. Jimmy,” two engineers aboard the Deepwater Horizon who are trying to make sure the rig can safely extract oil from beneath the ocean floor. While they’ve worked on the rig for several years, they’re shocked to find one of the teams responsible for ensuring the concrete foundation were released from duty as their job was “finished.” Apparently the BP Oil manager in charge of the well (played by John Malkovich doing his best cajun accent) had been rushing everything since everything was over 40 days behind schedule. Despite protestations from Williams and Mr. Jimmy claiming that the rig (already in a state of disrepair) was not ready to tap the well, the corporate heads push forward anyways…you can guess what happened next.

Now what I really appreciated about this movie was setting up how the Deepwater Horizon explosion happened through the lens of the rig’s employees explaining why everything is horrible on board. Through Mark Wahlberg and Kurt Russell, we learn of the day to day problems aboard the rig like the phones not working, smoke detectors lacking batteries, basic safety checks not in place, and the absence of the concrete foundation team to ensure the well can be tapped. We also learn why the tap went forward anyways and it’s all to come to a single conclusion: British Petroleum fucked up.

You mostly get this idea through John Malkovich’s absurd cajun accent. The dude might as well be a Southern plantation owner with the way he sneers at engineers who know way more than he does in order to urge them to tap the well. While I doubt he’s based on any single person in particular, I get the distinct impression that he’s an amalgamation of various BP executives cracking the whip for Deepwater Horizon to start extracting oil. Of course when shit goes south, he does the Jonathan Hyde dance from Titanic as a character who urged an action that lead to a gigantic calamity and sulks around the survivors with the weight of the world on his shoulders…or at least that’s what I think the film intended for me to think.

If the film has any weaknesses is that there’s not enough character development to make you sympathize with people who have died. The movie’s far more interested in helping you understand how offshore drilling works, safeguards that are required to be used, and the various errors in judgment that lead to the April 20th disaster. Now to the film’s credit, these mechanics are communicated to us via the various thespians on display, Wahlberg and Russell in particular, as they use common parlance and American slang to effectively communicate how this shit works and where it all went wrong. And while it’s great we have solid actors who can pull this trick off, the emotional heart of trying to survive a calamity is sorely lacking.

The person you get to know the most is Mark Wahlberg’s character as it chronicles his life before boarding the vessel with his wife (Kate Hudson) and their daughter. To all of their credit, they made for a believable family and Wahlberg seemed very comfortable in every social environment he was in (which is appropriate since he’s very familiar with the ship’s crew). Wahlberg even gets a moment of dealing with PTSD towards the end of the film as he’s embraced by his family, which made for a genuinely touching moment that a lesser actor could have easily flubbed. So it’s a bit disappointing you don’t get to see as much development for Russell’s character, or even Malkovich’s; or hey they even got Jane the Virgin (Gina Rodriguez) in here for a lengthy run time and they don’t do much with her character. These are all great actors that could have delivered on the emotion if given the chance the film sadly doesn’t afford them.

But really, you’re not here to see Mark Wahlberg or a bunch of quality thespians act. You’re here to see an oil rig explode and witness roaring flames consume everything they touch. And the director, Peter Berg, certainly gives you exactly what you came to see. After meticulously setting up the domino chain that lead to the disaster, Berg taps the first domino and you witness almighty carnage let loose aboard this oil rig. It’s spectacular in a horrifying way, making it somehow unbelievable that so many people survived this explosion. But truly truth is stranger than fiction, and the knowledge that all of this is true makes it astounding to watch.

Berg shows off here some brutal disaster sequences of fire engulfing everything on board that truly feels unique and something you’ve never seen before. So the fim’s already getting a recommendation for that alone. But it helps that he made sure the editing and camera angles were careful to give you an idea of the scope and magnitude of this firestorm, and he employs a bunch of practical effects that looked truly amazing. The director has come a long way since a near career-ending project with Battleship before redeeming himself with Lone Survivor (also with Marky Mark), and he displays a confidence in his direction that some action films fuck up spectacularly with.

I’ll end with the pacing being very effective in getting you from Wahlberg’s family to surviving the explosion of the Deepwater Horizon, and this is what truly separates it above Sully. Aside from focusing on the lead up to the disaster (as opposed to alluding to the disaster that just occurred and later showing us the disaster and then dealing with the aftermath…which is not fun), Berg demonstrates a solid control of the scene that doesn’t fawn over its characters the way Eastwood does. He allows you to appreciate the heroism of certain characters without calling them heroes, it’s natural and it feels easier to accept.

Despite my reservations, I can tell people to go and check this one out in theaters. Maybe IMAX or a FULL PRICE ticket is worth it, but I’d give this a very enthusiastic…