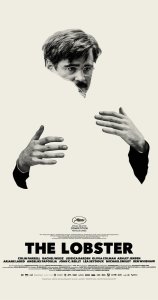 Well, well, well, you’re probably wondering why I’m doing a review of a film that was released early in 2016 at the end of January 2017. Even though I saw over a 100 films and declared my choices for the best and worst of the year, I admit I had a few skips…skips that the Academy of Motion Pictures Arts and Sciences so decided to nominate. It’s not too much trouble for me, I only missed out Lion, Twentieth Century Women, and The Lobster; the last of which I saw last night for your analytical consumption today. Will any of these films find their way into my top 10? Or even my runners up? I will definitely update the list if so, but for now let’s take a look at a film all about relationships…and being turned into an animal if you’re single.

You read that right. Our world for this movie is one in which humans must be in a relationship or get turned into an animal. Oh, but the single person can choose which animal they get to become should they fail to find a suitable partner within 45 days. And when I say “suitable partner,” I mean someone who shares at least one thing in common with you…like getting random nosebleeds, that’s something for two normal people to share as a couple. Enter our protagonist David (played by Colin Farrell) who just found out his wife has left him for another man and he’s being escorted to a hotel where he’ll have to find a new partner within the preordained time limit. If he finds a partner, then that’s great but he’ll have to settle in with her for at least a month before being identified as a “couple” and allowed to leave the hotel. If he doesn’t find a new lover within 45 days, then he gets to be turned into the animal of his choice, a lobster.

But wait, couldn’t he just run the hell away and not get turned into a lobster? Very astute clever readers, but the film carefully and politely explains that all single people (referred to as “loners”) are to be hunted down by the hotel’s visitors with tranquilizer darts to turn the loners into animals. For each loner they claim, the visitors can extend their stay in the hotel by one day. A time frame that grows increasingly shorter as David can’t seem to find luck finding a partner, and his other friends (played by John C. Reily and Ben Whishaw) go to more desperate lengths to find their own partners to escape their cruel fate.

As far as premises go, The Lobster blows most films out of the water. Though you may notice that this plot synopsis has the faint whiff of Indie Arthouse Theater *cue children’s cheer track* and I decided not to open up with my review mocking it. Well aside from the fact I like to challenge myself (read: the intro was boring me), The Lobster is such a fascinatingly dark comedy that I forgave the out there premise. Which was a good thing, because the first act kept losing me hard. Don’t get me wrong, I “got” what the film was trying to say about societal pressures when it came to being in a relationship; but I was legitimately wondering what all the fuss was about until the second half of the film and the introduction of Rachel Weisz’s character as well as other loners that David comes across.

You get to explore the loner society and find that you trade some freedoms for others. When you’re in the hotel, you can’t masturbate (or face some messed up corporal punishment) and have to maintain a strict regiment of activities as you try to find a partner; but when you’re in the loner’s domain, you’re free to do whatever you like except for one thing: you can’t form a relationship with anyone else. Even if you so much as flirt, you…well let’s just say it doesn’t end well for you or the person of your affections. The absurdity of both worlds came together to form a pretty interesting picture on the extremes people look at relationships, and I started to appreciate the film for explaining its thesis in such a unique (and bizarre) way.

This all carried by the great acting on display, especially from Colin Farrell, who really hasn’t impressed me since the Fright Night remake in 2011. He acts as a quiet and very polite man, even as he’s hunting down other loners and going to some pretty insane lengths to find a new relationship.  What’s interesting is that he clearly doesn’t want to find a new lover because he’s lonely, it’s purely because he has the Sword of Damocles hanging over his head ready to shove his brain into a lobster (actually the movie’s deliberately vague on the whole transformation process to its benefit). And the way he goes about finding companionship early on in the movie is great in all the macabre ways, though I will caution if you’re a pet lover…you’re not going to like what happens to some creatures in this film.

Assisting him is Rachel Weisz who plays both a love interest for Farrell’s character and the narrator for the first half of the film. Her dry, deadpan explanations of the absurdities you witness make for a great display on the film’s part. Actually, her delivery is very similar to every other character in the film, giving this strange haze of British absurdity where you know they’re satirizing something but you’re not quite sure what points they try to make.

And this is where I come to the part where I’m holding back loving this film entirely. While the second half of the film brought me back around, and I did enjoy the ambiguity of the finale (relax no spoilers today), I can’t say that I fully understand if the film had anything particular to say about relationships except that “society sucks.” Now, I’m sure with a second viewing, I might find more to it but right now it’s sucking me in the way other films have grabbed me.

Also, while I can see why this film got nominated for Best Original Script for the out-there premise alone, I can’t say I absolutely adored the screenplay. The matter-of-fact dialogue was oddly humorous for me, but that beginning was losing me pretty hard because of it. I mean, you’re in a world that’s clearly insane and Colin Farrell’s character is the one coming close to trying to play the “straight man”…except he embraces the structures of his world willingly until its not convenient for him. That might go to one of the film’s messages about forming relationships, but it could also be the writers just didn’t know where to take their concept any further and decided to end the best way they could. For an “arthouse” type film, I still prefer this film over fare like Swiss Army Man, which ultimately didn’t say anything even though it may pretensions to some grand message about friendships.

This is a much more fun exploration into the very nature of relationships compared to Swiss Army Man; so for that contrasted with my critiques, I’ll give this a very solid…

4 thoughts on “The Lobster Review”