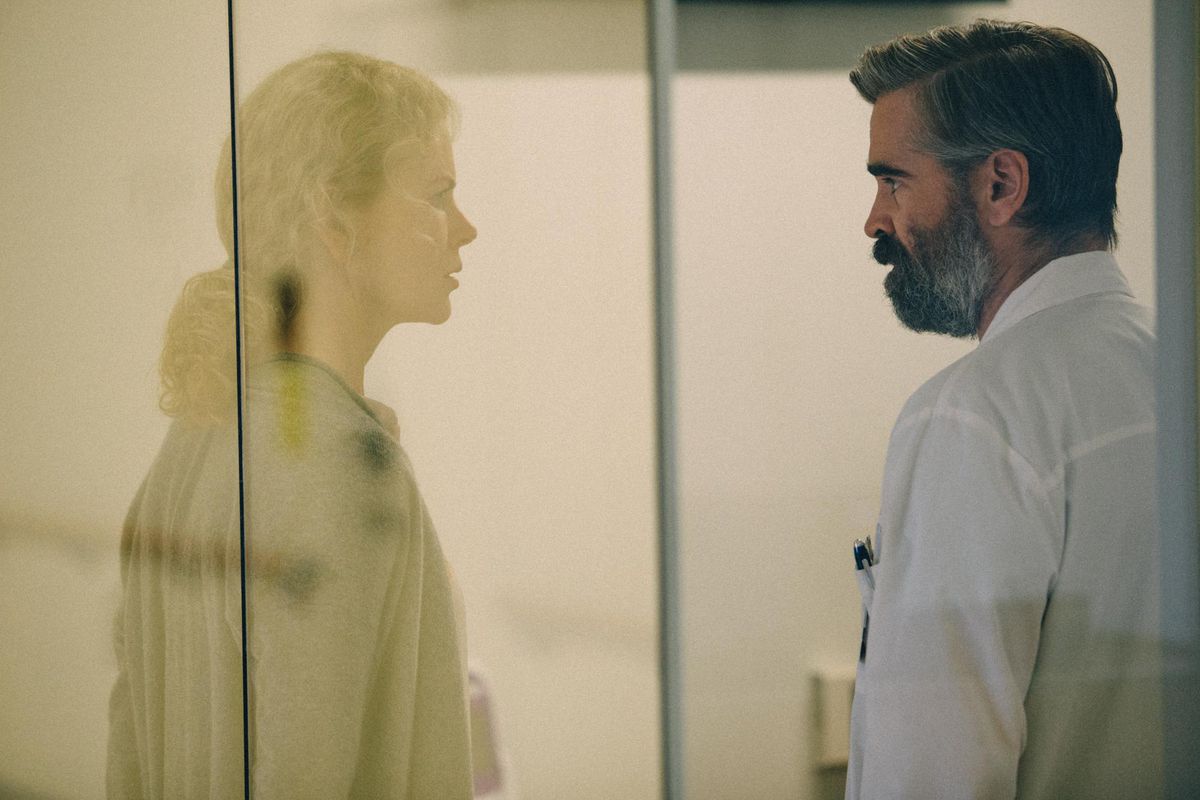 We meet Dr. Steven Murphy (Colin Farrell) a prim and proper cardiologist who lives an ordered existence with his wife Anna (Nicole Kidman) and his two children Kim (Raffey Cassidy) and Bob (Sunny Suljic). Steven also spends time as a mentor to a boy from Kim’s class named Martin (Dunkirk‘s Barry Keoghan). At first the two seemingly have a decent relationship until Martin makes increasing demands for the cardiologist to be in Martin’s life as the boy’s father, a former patient of Steven, died ten years ago. When Steven begins to ignore Martin’s requests for attention, each member of the doctor’s family begins experiencing strange and horrific ailments. Martin advises Steven that he placed a curse on the cardiologist’s family in retribution for a sin from Steven’s past. The only way to lift the curse before it destroys the entire family is for Steven to kill either his wife or one of his two children in order to save the rest.

No, they never explain how Martin possessed such an ability to make the Murphy family suffer various conditions nor Martin’s ability to remove certain symptoms at will. Much like The Lobster, the supernatural element isn’t the focus as it’s primarily concerned with the tense situation presented before our protagonist. And on that front, the film is quite effective in raising the stakes as the film proceeds forward, especially as the Murphy family begin to lose their minds as it slowly dawns on all of them that Steve has no choice but to kill one of them. At this point, Anna and the kids each take turns explaining why they shouldn’t be the sacrificial lamb (or Deer as it were). It’s pretty intense to watch and filled with high drama…at least it would be were it not for the characters’ stilted way of speaking that made them all across as alien as possible.

Now,  the director used a similar style of dialogue for his characters in his previous work, The Lobster. And while this is a stylistic flourish of the director, I accepted the off-putting dialogue more in his previous work than I did in his latest because that film was depicting a world that had lost all sanity. Every character, bar none, was keenly aware that they were in a ludicrous situation and yet accepted it as totally normal to be confined to a hotel for roughly a month to find a new mate or suffer the consequence of being turned into an animal of their choice.

The absurdity of the premise and the characters accepting the situation as totally normal assisted in letting you buy the fact that these people are talking in a very odd manner. But for The Killing of a Sacred Deer, the weird dialogue comes from the main cast members while the rest of the film’s world talks like a normal person would, so it creates this weird disconnect that drops the film headfirst into the uncanny valley. As if we’re gazing into a world that looks much like our own, but all the differences between ours and it just make you feel uncomfortable.

Maybe that was the point, but honestly the whole Sophie’s Choice presented before Colin Farrell’s character is disturbing enough that the film really didn’t need the strange acting from the entire cast. Granted, it was intriguing to watch even if it did make make say “dafuq” every five minutes with some random line of dialogue or bizarre act committed by the characters. And really, much props to the cast for following the director’s wishes to a tee despite how awkward it must have been to deliberately say these lines the way that they did. Though I will say that the standout of the pack is definitely Barry Keoghan as Martin. He didn’t get much of a chance to shine in Dunkirk, but here he goes from a sweet, unassuming character to a genuine malevolent force who is only made more disturbing by the fact how nonchalant he is towards the Murphy Family’s plight. Acting opposite of heavyweights like Farrell and Nicole Kidman is no easy task, but the film is hard to look away from when he’s on screen.

However, we don’t get to spend much time with Martin as we primarily follow Farrell around. And much respect to the veteran actor as he gets an opportunity to show a wide range of emotions, especially as he depicts someone on the edge of sanity deliberating with making a near impossible choice. The rest of the family turn in very chilling performances as each begin to rationalize to Farrell’s character as to why they should be the one to survive and just how much better it would be without certain family members around. The whole experience was aggressively cynical and disturbing to watch, making me feel a little dirty for watching the whole thing.

While the film kept me captivated all the way until the end credits, especially with its striking classical score, I can’t say that I left satisfied. I enjoyed The Lobster far more as a surreal exercise exploring societal norms in satirical sort of way, but I didn’t have as much to chew on in terms of theme here. I guess the film is making a point about family dynamics being challenged and exposing how selfish each relative could become, but the film doesn’t have much to say about the subject beyond “doesn’t this suck?” I could be asking for too much when it comes to surrealist works, but I just didn’t get that much payoff out of this film.

If you’re normally not a fan of this sort of style, I can’t say that you’ll enjoy this movie very much. However, if you can get past the stilted, almost alien-like dialogue, you will be entreated to at the very least a very tense, slow burner of a thriller. While I didn’t immediately like the film upon exiting the theater, it has grown a little bit on me as the hours go by and find more aspects that I liked about it. With that, I’m giving this a low…

One thought on “The Killing of a Sacred Deer Review”