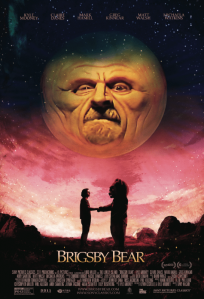 Room as a heartwarming comedy?

Some premises look like a nightmare on paper. A dark comedy about an abducted child re-entering society as a man after over 20 years of captivity? While such a concept worked wonders as one of the best dramas of the last decade, making light about the subject is just inviting controversy. And yet this little film slipped under the radar as it’s distributors at Sony swept this under the rug for the world to ignore. Which surprised me as the film was partially funded by funnyman Andy Samberg through his Lonely Island label. Curious, I managed to catch the last screening in theaters a few weeks ago and had words to say, but figured I’d hold this review until just before its streaming and Blu-ray release. So let’s dive into the bizarre case of Brigsby Bear.

So James Pope (Kyle Mooney) resides in an underground bunker with his mother and father (Mark “Luke Skywalker” Hammil) where Pope believes the world to be a toxic wasteland save for pockets of civilization like his family’s. He spends his days studying math and obsessing over a children’s show called “Brigsby Bear,” a cheap space adventure spawning several years. However, it’s quickly revealed to James that his parents aren’t really his parents…he was abducted as a baby and had been held captive for several years. He’s saved by Detective Vogel (Greg Kinnear), and reunited with his real parents (Matt Walsh and Michaela Watkins) and his sister Aubrey (Ryan Simpkins). That’s bad enough for James but he then learns to his shock that his favorite show “Brigsby Bear” only had one audience member: him. Hammil’s character basically made the show entirely for his captive all those years. Yet James cannot stop thinking about the show, especially as it ended on a cliff hanger. Believing that will not suffice, James makes quick friends with a filmmaker named Spencer (Jorge Lendeborg Jr.) and sets about making a feature film length conclusion to the Brigsby Bear Adventures.

As I opened this review, some premises are made of crazy. And yet, against all odds, it works better than anyone gave it credit for, including the studio distributing this movie. Because this film has something that so many other films lack: sincerity. Such a wonderful feeling can help elevate a weaker film to a higher plane given how fiercely the filmmakers believed in their project. Add some smart writing, solid acting, and a healthy dose of imagination, and you have yourself a production to be truly proud of.

While the first act is a bit jarring given the incredibly dark premise, the film moves along quickly to get James to begin his movie project. And even then, Brigsby Bear at least populates its cast with patient and interesting characters as they deal with someone who is clearly not all there due to what happened to him. So when the shift to film production begins in the second act, you have several sympathetic characters who you see interacting with each other and would like to spend more time with them and your curiosity is piqued. Which is especially helpful as the production of the “Brigsby Bear” movie has several endearing moments, like watching James excitedly play with all the props he obsessed over the years and another character giving acting another a shot in their life only to realize how much they had missed it. There’s something purely joyful about watching a bunch of characters create something fun, which helped cement this movie as one of my favorites of the year.

And while you’re busy picking up your socks after I just blew them off with that statement, let’s go for a 1-2 punch: this movie reminded me of mother! in several ways, and I enjoyed this Andy Samberg production better than whatever Aronofsky was going for. To me, the films are related in the sense that they both discuss the relationship between creator and those close to them. But whereas mother! adopts an incredibly cynical worldview where the artist is burdened with the power of creation, and they are doomed to push everyone close to them in pursuit of the high of adoration from fans; Brigsby Bear sees creation as therapy for major trauma and a bridge of connecting artists to those who share their passion and those trying to understand the artist. Maybe I’m a sucker for positivity over outright despair; but given that I have adored many a screwed up film as best of the year material, I’m quite comfortable in showering a silly comedy praise versus a film with their head shoved firmly up its own ass.

Heartwarming feelings aside, I don’t think I would have enjoyed this film without Kyle Mooney in the lead role. This is an incredibly difficult role to pull off in terms of capturing someone who has been isolated from the rest of the world all his life and trying to navigate an alien environment. But Mooney rises to the occasion as he was helped by the script he himself wrote and the direction of Saturday Night Live director, Dave McCary. Additionally, Mooney brought a vulnerability of a child in a man’s body, but unlike several unfunny Will Ferrell comedies where the “hero” is rewarded with adoration and a trophy wife, Mooney’s character instead is seeking only closure for his own passion. It’s a far more human goal and consequently, infinitely more relatable than your bog-standard raunchy comedy.

Additionally, the supporting cast was instrumental in giving you the complete package. Nearly all of the characters treat James Pope with a combination of frustration and patience as they try to bring him up to speed with how the world really works. And while many of them express exasperation with how James responds to their explanations, they still have the good sense to realize that they can’t act like complete jackasses themselves as they are fully aware of what happened to this person. It’s one of the rare instances that really capture what it’s like to be a person trying to support someone who had just gone through some kind of trauma. Of note, Jorge Lendeborg Jr. and Greg Kinnear were standouts in the cast because both of them were especially fun in encouraging the main protagonist with his vision as they see something of worth in this creative endeavor. And Matt Walsh as James’ father gave a very subdued but very pained performance in trying to relate to his son, that I wanted to see more of this dynamic play out. Oh yes, and Mark Hammil is always fun and you even get to see him do a little bit of voice acting for diehard fans of the prolific voice actor.

Now, I should caution that this film is not really a laugh riot, it’s far closer in kinship to a dramedy what with the subject matter and tone. But, if you’re willing to accept the out there premise and are in the mood for something that starts out disturbing but ends up in a life-affirming place with intriguing and well rounded characters, then have I got the movie for you. I’m giving this a very enthusiastic…

One thought on “Brigsby Bear Review”