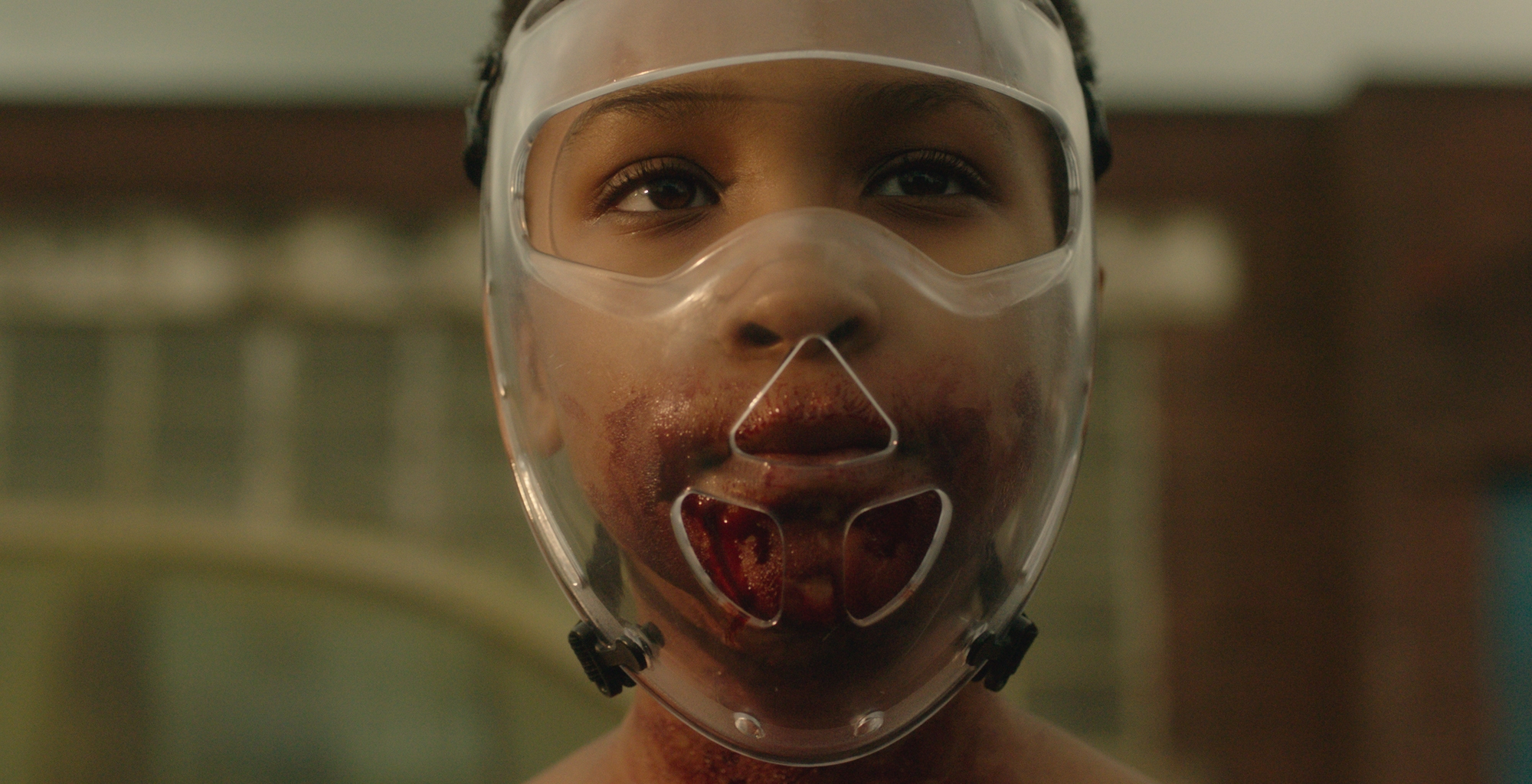 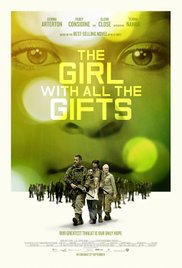 Hot off the heels of Train to Busan, we have the previously mentioned The Girl with All the Gifts coming in from the UK to theaters in the United States last month and a recent entry into streaming services like Google Play. The only thing I knew about this film going in was that it as an adaptation of a popular novel by M.R. Carey and it features zombies. And while Train to Busan was a traditional survival narrative taking place in an unique location with well-written characters, Gifts tells the story of a little girl who is infected with a disease that causes people to have an insatiable hunger for human flesh, but strangely will not turn into a feral beast devoid of any humanity. Quite the contrary, our hero has all the mental faculties of a curious girl but is capable of eating any human in her immediate vicinity.

Our film begins in a prison where our protagonist, Melanie (Sennia Nanua) is a highly intelligent child who must be confined to a wheelchair where her head, arms and legs are completely bound as she receives a basic education from Helen (Gemma Arterton). You find out that the children, despite the fact looking and behaving like normal schoolchildren, can become ravenously and uncontrollably hungry for any kind of flesh including that of delicious humans. While the military personnel lead by Sgt. Eddie Parks (Paddy Considine) treat the children like monsters, only Helen treats them with any sort of compassion particularly towards Melanie who in turn views her as a mother figure. However, all of these kids are being studied by Glenn Close’s Dr. Caldwell as she frantically tries to search for a cure to the disease that affects these children. Because the rest of the world has fallen prey to the usual zombie apocalypse, and humanity’s last stronghold are falling apart. After the prison is overrun, Melanie hooks up with Dr. Caldwell, Helen, Sgt. Parks, and Private Kieran (Fisayo Akinade) to set out for a new survival zone. But first they must brave the desolate world brought forth by the infection.

What’s interesting about these zombies is that they behave like fungus as opposed to a virus. Aside from more grotesque imagery, the idea of people turning into brainless zombies through fungus actually makes more sense in the real world. No really, Ophiocordyceps unilateralis is an actual fungi that could turn ants into hosts to keep spreading itself over and over again. It’s an idea that was not only capitalized well by this film, but also by the popular video game, The Last of Us. Funnily enough, the book this film was based off of was published almost a year after The Last of Us was released, so it’s hard not to imagine the author was heavily influenced by zombie survival adventure. But the function is all that the film may owe to the video game, as the story goes into a much more different (and intriguing) direction.

See, getting to know and understand the character of Melanie is so important for this film to work, and thankfully the filmmakers cast an amazing young actress to stand up to the task. Sennia Nanua is absolutely brilliant in both drawing you into her world, breaking your heart with all the terrors that befall her, and understanding some very complex decisions she makes towards the end of this film. For an actress to accomplish this feat is impressive enough, but for a child to act circles around others? I have to single her out for contribution, particularly when she has to act opposite of some very well known and talented thespians.

Assisting Nanua is Gemma Arterton as Melanie’s teacher. Now this was also another tough role to accomplish because it would have been so easy for a lesser filmmaker to make her into some madonna-esque character that inspires our protagonist. Arterton isn’t here for that; when the situation demands, she turns into a ferocious mother ready to cap an ass should anyone dare threaten Melanie in anyway. The reasons for the pair’s bond is well developed enough for you to believe in it, particularly impressive with how little time the film has to set it all up before the zombie horde force everyone onto the road. Thus putting our main characters with others that clearly don’t want to be close to this girl.

For instance, Glenn Close’s character would much rather Melanie on an operating table rather than anything else. She plays an obsessed scientist who believes she’s just one step away from realizing a cure to the zombie plague, but uses far more interesting tactics than other mad scientist archetypes. Close doesn’t play a wildly out-of-control crackpot genius but a cold, reserved and conniving person. Even when her actions threaten the other survivors, she’s very careful with how she approaches them to prevent them from wanting to take her out as a liability, her importance in finding the cure be damned. She does go down a much darker path as the film winds down, but it’s a genuinely believable development given the character and the world they inhabit.

The environment, speaking of which, uses a lot of the overrun dilapidated iconography made famous on various post-apocalyptic films and television shows, but its effects on the entire cast is very clearly and obviously communicated to the audience. Most of the soldiers stare at Melanie and the other children with pure pants-shitting terror and aggression as if they’re staring down a rabid lion as opposed to a nine-year-old girl.  Paddy Considine, in particular, plays the gruff commander who frequently calls Melanie and the other children “abortions,” so he only keeps the girl around due to the demands of Glenn Close’s character. But Considine’s character is also a pragmatic character, so even though you immediately hate him upon his introduction, your thoughts begin to change on him when you see him react and adapt to his and the other’s current predicament. This is done well with his interactions with Melanie, and they genuinely form a nice relationship you only know is doomed because, hell this is what the zombie genre demands.

As with Train to Busan, the sense of dread for our characters is palpable as their situation grows dire by the minute. Not only do the zombies threaten the life of our characters, but additional plot developments tighten the noose around her protagonists’ necks to make it every bit discomforting and unnerving. Once again, this is solid horror conveyed through a wonderful feeling of suspense as our characters’ lives and their world is put into further danger as the film unveils each hand it has.

All of this culminates in a final act that is simply put, superb. I will not forget the last thirty minutes of this film because all hell breaks loose for our protagonists in the worst ways imaginable. Not only are they put through the wringer in deeply disturbing situations, but the implications of their actions are both understandable and horrifying at the same time. I have not had a feeling like this since seeing the alternate of the Will Smith version of I Am Legend. No, I’m not talking about the theatrical cut’s ending, I’m talking about the balls to the wall resolution that leaves you with a feeling of absolute shock that Smith’s character experienced. It was a crime against cinema that the neutered version is what was shown in theaters, but The Girl with All the Gifts demonstrates it not only has the testicular fortitude to go with an incredibly dark and complex climax but it even has the confidence to allow its characters to breath in its implications.

With such high praise for everything I’ve talked about, I really got it give it up for Colm McCarthy adapting M.R. Carey’s own screenplay (yes the author wrote the script as well) and delivering a well shot and tense experience. I will give him a small critique in that some of the computer-generated effects, particularly with the blood splatter, were poorly rendered. It was a bit distracting, but this really only affected the very beginning of the film and sporadic moments in the second act before going away completely for the magnetic finale. Hopefully McCarthy improves his craft in directing action scenes because he’s demonstrated already a knack for working with all sorts of thespians and building a world for you to get lost in.

Loved this film from start to finish, I’m happy to give this film a solid…

3 thoughts on “The Girl with All the Gifts Review”