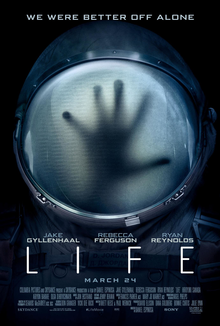 “Imitation is the sincerest form of flattery,” is the mantra adopted by several directors who take existing ideas, story beats, and camera angles from other films and adopt them wholesale for their own movies. It’s the bread and butter of Quentin Tarantino after all. And while it’s not unheard of to use similar themes or filming techniques that worked so well in other fiction, there is a certain line that can be crossed when people stop calling a work an “homage” and start calling it a “rip off.” Now does that line begin with the quality of the film? Or does it begin with how alike everything is in structure? Let’s discuss with a talk about Ridley Scott’s classic Alien and today’s Life.

Our film begins with astronauts aboard the International Space Station recovering a probe that has managed to collect dirt from the surface of Mars. Humans getting to research this stuff for the first time is crazy enough, until one of the scientists crafts an environment safe enough to support life on Mars and discovers a multicell organism that’s still alive. Dubbed “Calvin” by kids who clearly wanted to see a pissed off alien, the entity grows in size at an accelerated pace to the concern of the entire crew save for one, played by Ariyon Bakare. But when he gets too close to Calvin, the alien demonstrates it’s not only smart but incredibly dangerous as well.

Again, this should sound all vaguely familiar if you’ve ever seen Alien or even Prometheus. Particularly in the latter where you human scientists mess with organisms beyond their comprehension; but unlike that trainwreck, the scientists here have taken every precaution necessary to keep this thing contained in case something goes wrong. However, due to plain old reasonable human error, Calvin still manages to escape his containment and wreaks havoc across the station. And the film wastes no time in getting the suspense on as the alien goes around systematically eliminating the crew one by one.

The only trouble I had with this movie is that all of this feels too familiar, to the point I’m having difficulty explaining why people should see this movie if they can already watch Alien at their leisure at home or even at a dive-theater hosting a special event. Life‘s only real claim to fame here is the use of anti-gravity which creates interesting new paradigms for the protagonists and antagonist to utilize against each other. But even then, we only have this technology in the first place thanks to Gravity from a few years back, which kept the action and suspense focused while finding new ways to stack the deck against our protagonist while also having her explore the regret she’s had in her life. Yes I am praising Sandra Bullock for something and it’s baffling to this day as I praised her back in 2013. Which makes it weird for me to say that Life needed someone of equal importance and we don’t really get a major performance from anyone despite having multiple veteran thespians.

Keep in mind, no one in this cast is bad. Far from it, they all did commendable jobs in showing fear and camaraderie with each other. And this is a solid list of actors ranging from Ryan Reynolds to Jake Gyllenhaal and Rebecca Ferguson, all taking this shit very seriously and with much aplomb. But the problem is that the film doesn’t dedicate much time to each character to flesh them out enough since the film is in such a rush to end. Seriously, I clocked this thing at a little over an hour and a half and it felt like it was over before I knew it. It didn’t end in a bad place either, but I was left with a sense of “was that it?”

And that’s the biggest mark against this film. For such a great cast, for such a decent script, and for such solid special effects; I’m left with a feeling of absolute “meh.” Which is ironic considering that I was supposed to be watching a killer monster go around viciously murdering astronauts. I mean at one point, this creature realizes he can’t suck out the life of one of the characters due to them being inside a space suit, so Calvin proceeds to crack some fluid that ends up drowning the poor bastard in the bleak of space instead. Just to be an absolute prick. But with such a jarring scene such as this one, I still couldn’t keep myself invested in the picture or even fear Calvin.

Now I tried to think of why Alien works so well despite being filmed with far less impressive special effects. Part of the reason is that the movie took its time in establishing all the side characters that got picked off and especially fleshing out Ripley in particular so you’re cheering for her escape from this creature. Additionally, the Xenomorph has an iconic design that continues to ingrained in people’s nightmares to this very day. In contrast, you don’t get much of an opportunity to spend time with any single astronaut to know them well, save for Reynolds as the “funny one” and Bakare as the “curious scientists who gets everyone killed because of his curiosity.” Further, Calvin takes the form of this weird tentacle monster that saps the life out of its victims with its tentacles just by affixing itself to the skin. But that’s really the only string to its bow.

The Xenomoprh was a calculating killer with all sorts of tools available to screw people up with its claws, teeth, tail and acidic blood. It could blend itself to the darkness, allowing for hiding in plain sight for all the better to jump out and maul you to death. Calvin’s really only scary for his first victim when he manages to enter the astronaut’s esophagus and completely wrecks their insides. While this is horrific enough, that’s pretty much the last time you’re impressed with it. You do get curious towards the end with this strange substance it secretes, but the film is over before you’re able to discover its true purpose.

Overall, this movie isn’t bad, but I’m having trouble justifying it’s existence. Honestly, Sony couldn’t get people excited for this thing leading to a humdrum box office performance. I think this movie will have more legs when it hits streaming services, and for that venue I’d give this film a solid recommendation. This is getting a high…

One thought on “Life Review”