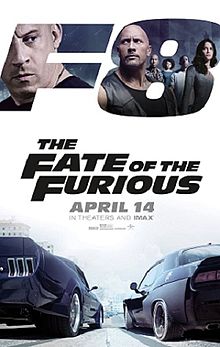 What a strange journey it’s been for the Fast and Furious series. It began as a Point Break knockoff meant to appeal to tuner culture before sputtering into the absolutely boring Tokyo Drift. And then something strange happened…the series was brought back with the original cast in 2009 only adding stunts that broke physics in half and smoked it’s rotting corpse. Every sequel since then has been a never-ending quest of one-up-manship while reinforcing a theme of “family” to somewhat comical degrees. Against all odds, we now have a critical and commercial worldwide success featuring superhuman wheelmen, hackers, and thieves that find new and interesting ways to soil the grave of Sir Isaac Newton. How does the Eighth entry compare? Let’s discuss…

After the last film, things seem to be going well for Dominic Toretto (Vin Diesel) after he got back with his formerly amnesiac girlfriend Letty (Michelle Rodriguez…and it’s a long story). While hanging in Cuba, he gets approached by a ruthless cyber terrorist named Cipher (Charlize Theron) into betraying his team with leverage that even Dom can’t refuse. His actions leaves his new best friend, Hobbs (The Rock), in an Ultra Max Prison next to the antagonist of the last movie, Deckard Shaw (Jason Statham), and the rest of the team (Ludacris, Tyrese Gibson, and Nathalie Emmanuel) scrambling to figure out why the guy who made them a family turn on all of them.

I’m making this sound more serious and heavy than what it is, because Fast & Furious 8 is absurdly dense but only slightly less dumb than the previous films. Surprisingly, the reason for why the ridiculous chain of events that unfurl make a degree of sense compared to the previous installment where the heroes scoured the world for a technology that could help them find the antagonist…who was actively chasing them and appearing everywhere they went. At least here the motivations of the characters are somewhat reasonable, even if their plans and actions only make sense after huffing near lethal amounts of paint.

But we are getting ahead of ourselves, because I’d like to talk about the characters a bit more. You may find it odd that I’m dedicating such a large part of my review to story and cast for a movie that’s as dumb as this one, but the characters are what have brought me back for more ever since Fast Five. As I’ve established in multiple reviews for lesser action films, the camaraderie of the Fast & Furious team is why I prefer their method of funny banter and big personalities over self-serious dick-measuring machismo, and their conversations add just enough decent comedy that doesn’t grate and bridges together the action sequences. This has the two-fold effect of never allowing you to be bored in the theater and providing you a reason to give a shit as to what fate befalls the characters. And it is fun to witness The Rock begin an unintentional homoerotic bromance with Jason Statham; it’s fun to watch Vin Diesel speak of family in grizzled whispered, reverent tones; and it’s fun for me at least to watch everyone diss Tyrese Gibson for being a clown.

Now that’s not to say this magic works all the time, our lead actor is Vin Diesel after all and he’s really not that great solo. Hell, there’s a scene where he has to cry and you just feel like telling him, “Oh pumpkin, bless your heart, but you really can’t do this that well.” And yes Tyrese’s character can get a bit annoying at times partly because he acts too much of a clown and partly because he has little to contribute to the team of expert drivers, gunmen, hackers, and MMA women. The film tries to give him a moment to shine, but it’s only after it made a fool out of him in a stunt that’d be considered over the top in any other action film, but feels par for the course in a Fast & Furious film.

Speaking of which, I’m happy to say that the stunt work has not taken a dip in quality after a second change in director. At the helm for this installment is F. Gary Gray, director behind Friday and Straight Outta Compton. Thankfully this director is experienced in handling ensemble casts and has worked with several members of the Fast & Furious team such as Jason Statham in The Italian Job and Vin Diesel in A Man Apart. He knows how to compose his shots well too, while also being able to deliver the goods when it comes to great car chases and fight scenes. His weakness, however, comes in the comedy department and his script just doesn’t have the same memorable banter that existed in the last three Fast & Furious films that have made them so memorable.

Helping Gray along is the fact that the cast is incredibly comfortable each other and they use their own natural charisma to pump up the script enough to be passable. Further assisting him is the natural inclination of Fast & Furious stunts to be so absurdly chaotic that it becomes it’s own form of farcical comedy that walks the line between intentional and unintentional hilarity. And lo does the trend that began with the four installment continue of ridiculous chases ripping apart the laws of physics to make solid entertainment. Everything is thrown at you from a Cuban drag race where Vin Diesel is on literal fire to a harpooning a 5000 horsepower (roll with it) muscle car to facing down a horde of zombie cars. If you’re wondering how the hell that last one is supposed to work, you just need to see the film for yourself.

Because while the story continues to be legendarily thick, the stunts continue to impress and earn the film the distinction of being worthy of a theater visit. My audience was laughing and cheering from beginning to end, and the excitement is very infectious for people of all types to enjoy. Hell, unlike certain films that believe you need a standard Hollywood lead to earn a profit, Fate of the Furious continues the film series’ proud distinction of having a gender and racially diverse cast engage the audience with each member given a reason to shine through the proceedings and never letting you down with disappointment.

Honestly, my critiques for this film are reserved for the portions that DON’T go overboard. The idea of Charlize Theron as a villain should fill me with glee and have an endless series of possibilities…that are sadly ignored because the movie forgot to make her interesting or even fun to watch until the very end. Also, the movie is trying to fill the hole that was left by Paul Walker’s unfortunate passing with casting Clint Eastwood’s son, Scott, as the young protege of the government spook from the last film played wonderfully by Kurt Russell. But it was a bad idea to have Russell serve as the introduction for this guy because he’s about as flat and uninteresting as Lucas Black from Tokyo Drift (AKA the worst of all the films).

And yet, for every mistake this movie possesses, it still finds a way to leave you entertained. The aforementioned Kurt Russell is now a welcome permanent addition to this crew of thieves that are now effectively super spies, and Jason Statham being retooled as an ally of the group works wonders particularly in the third act of the film. Incidentally, this installment possesses the best finale out of any of the Fast & Furious movies. Yes, it beat the safe-as-a-wrecking-ball stunt across Rio in Fast Five, it beat the never-ending plane fight from Furious 6, and it beats the absurd battle across Los Angeles in Furious 7. These last 25 minutes are pure cinematic bliss that elevated an okayish entry in the franchise to a solid romp.

Even if you’ve never seen a Fast & Furious film (also, you should fix that), this is a perfectly fun movie to watch. Because as dumb as the plot is, it never forgets to give you characters to give a shit about it in situations you’ve truly never seen before. For all my complaints, this is still rolling away with a low but firm…

9 thoughts on “Fate of the Furious Review”