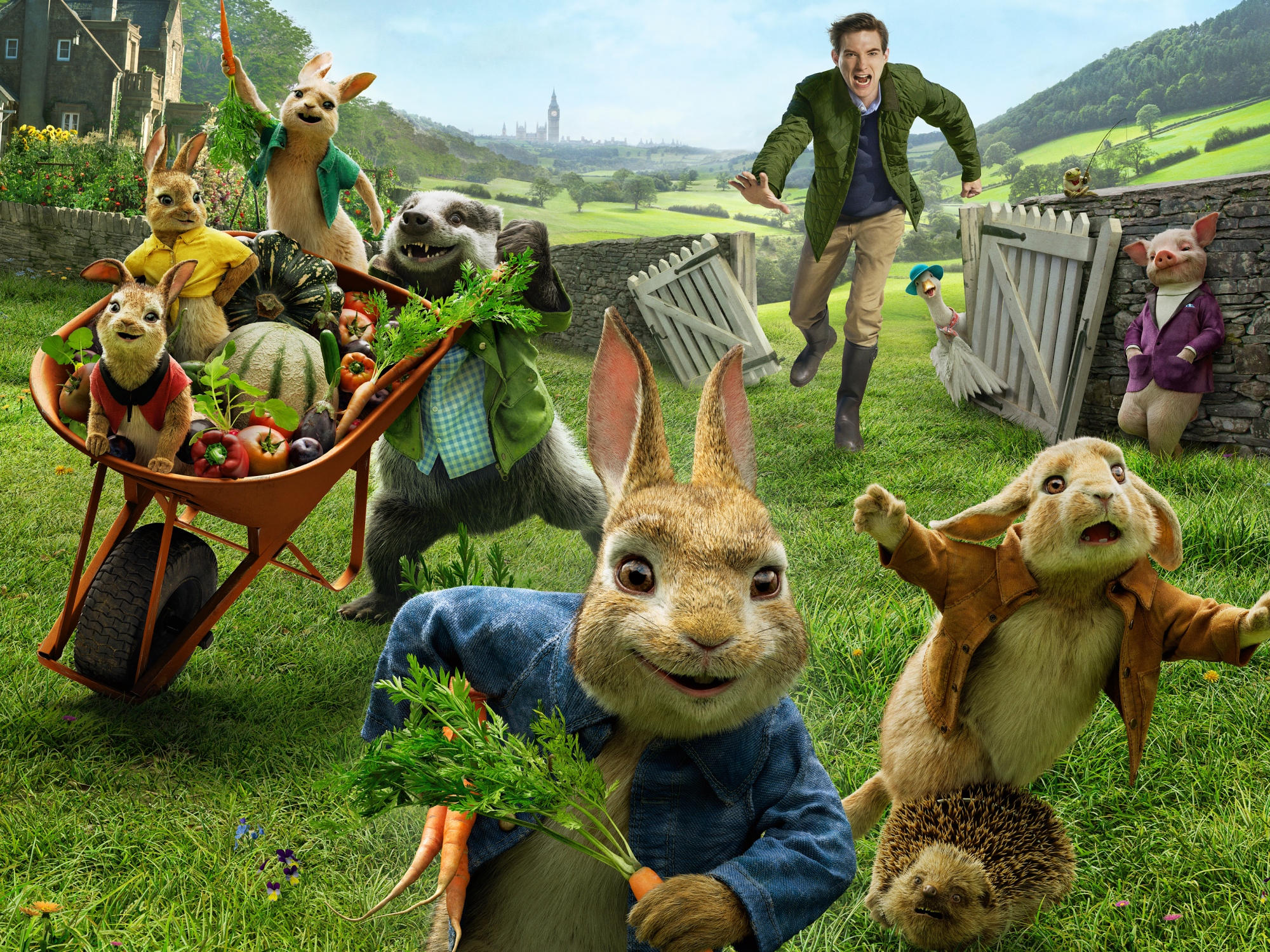 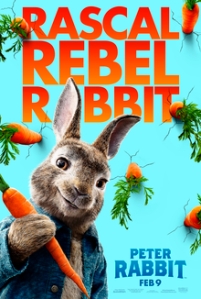 Should have been called Bugs Bunny

You’d think after reading my Paddington 2 review, that I would welcome a film adaptation of Beatrix Potter’s Peter Rabbit with open arms. Three problems with that thought: 1) I have even less of a connection to Peter Rabbit than I did with Paddington; 2) the film is produced by Sony (you know, the studio with an abysmal track record); and 3) it stars James Corden, who has voice that feels like nail on a chalkboard unpleasant. So I went into this movie bracing myself for oblivion, but then I remembered I was genuinely surprised by the quality of Jumanji: Welcome to the Jungle and thought, “Hey, maybe Sony might pull a watchable movie out of their hat.” Too bad for me, it came out of their ass instead…though it’s far from the nightmare I was readying for.

So in this modern retelling of the classic children’s tale, Peter Rabbit (James Corden) is a rabbit living in the English countryside with his cousin, Benjamin (Colin Moody), and three sisters: Cottontail (Daisy Ridley), Flopsy (Margot Robbie), and Mopsy (Elizabeth Debicki). The family of rabbits usually try to steal produce from the farm of the curmudgeonly Mr. McGregor (Sam Neil), while they are protected by the old man’s neighbor Bea (Rose Byrne, and yes, she’s named after the artist of the original books) who acts as a surrogate mother for Peter. After a usual day of mischief, the old McGregor dies right in front of Peter (he even pokes his lifeless eyes) and the local wildlife celebrate by taking over the farm and the senior’s home. However, McGregor had a nephew named Thomas (Domhnall Gleeson) who becomes the unexpected heir to dead man’s estate, and the slightly-psychotic department store manager dedicates himself to selling his uncle’s property to make some quick cash. While Thomas puts a damper on Peter and his family’s attempts to feed themselves, the titular rabbit starts to take it personally when the new owner of the farm begins to win the heart of Bea. Thus begins an escalating war of attrition as man and vermin try to kill each other…no I’m not being hyperbolic, they are ACTIVELY trying to end the other’s life.

Look, I wasn’t a fan of Peter Rabbit when I was growing up because I had barely any exposure to it as a kid. But what I did know was that the stories centered around Peter trying to outrun Old Man McGregor and Peter’s mom chastising him for his behavior. Translating that into an hour and a half family movie isn’t an impossible task as the Paddington films demonstrated. But what’s odd is that the filmmakers weren’t interested in Beatrix Potter’s creation as much as they were with another iconic cartoon rabbit. Because this movie genuinely feels like the closest we are going to get to a Bugs Bunny live action movie more than anything else.

Peter Rabbit in this movie is a total friggin’ dickhead with a smartass mouth that doesn’t shut the hell up. Now to the film’s credit, he occasionally tosses out a good joke, I mean by the law of averages something was bound to land well. But as I said before, I can’t stand James Corden’s voice, and he adds nothing charming or likable to the role the way Ben Whishaw’s quiet and polite demeanor captivated my heart in Paddington. But what makes Peter so detestable is that he’s both unrepentant in messing with everyone in his life AND he desires intimacy from the same people, so there’s never a moment that makes him intriguing to watch because he’s such a scorpion on the back of a frog.

Ironically, the character that does become more interesting to watch is Domhnall Gleeson, who turns out actually has some solid comedic timing. He looks like a weasely, wet and slimey douche, but he pulls off the Nathan Lane schtick from Mouse Hunt of a selfish-as-hell human getting hoodwinked by a small creature. What’s even funnier about him is his increasingly absurd attempts to cover up his attempts to kill Peter whenever Rose Byrne enters the screen, even when he’s yelling to the top of his lungs. Most of the film’s solid laughs belong to him and his gesticulations all over the place, and he even tosses a good one liner here and there.

Would have been nice if Rose Byrne had anything else to do rather than be the Madonna of the piece with no personality outside of “pure good.” Thankfully, the other actresses of the piece do a decent job with their voices even if I didn’t really recognize any of them. So Margot Robbie, Daisy Ridley and Elizabeth Debicki all end up creating a solid banter between them, to the point I wanted the film to make them the actual protagonists and have dipshit Peter be a trickster support character. Colin Moody’s Cousin Benjamin was downright forgettable though, to the point I had to to look up his dumb name online. Maybe I would have recalled the character if he had done 10% of the weird shit this movie throws at you, courtesy of Peter. And I have to admit, the film becomes mildly watchable as the absurdity for a children’s movie increases.

No it’s not the acid trip that was The Boss Baby, but…well, I just have to describe certain scenes for you to get an idea of what I’m talking about. You have a scene where Peter chews on a carrot like he’s getting high on weed as he tries to talk philosophy with another female rabbit. You have Peter setting up bear traps all over Thomas McGregor’s home as he gets mauled by them. And you also have a slow motion walk set to the tune of Fort Minor’s “Remember the Name”…which was the oddest entry in the overloaded pop music soundtrack of the film.

While these are things that piqued my interest, they were mere glimpses into a film that was full of compromises. If the movie had committed to being as absurd as a Looney Tunes cartoon throughout its runtime, the way Mouse Hunt so effortlessly did almost two decades ago, I would have actually enjoyed it more for a higher rating. But the problem is the movie also wants to have sweet, tender moments that feel thoroughly unearned while also having jokes that don’t always hit the mark. Still, at least it’s not an absolute catastrophe, so thank God for small miracles.

There are way better movies to check out in the box office now, but I don’t think you’d be disappointed if you saw this as a…